'Imu Me This, Part 'Elua 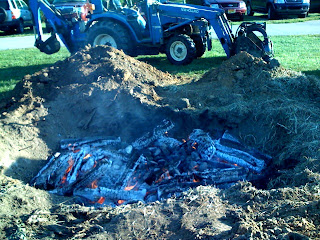 After burning for four hours and still unbelievably hot, the stones are ready.

So far, this has been the best 'imu making I've ever been part of. David and his boys have done all the hard work of digging the 'imu, building the fire and the hard labor involved. I have the unique pleasure of stopping by, making sure everything is good to go and just prepping the pig.

Picking up where we left off, it's just a waiting game. For this 55lb. pig, I originally planned an 8 hour cook. When we arrived around 4pm, there was no steam escaping from cracks, which makes me nervous. Was there sufficient stalks and wet material to keep the steam going? Were the stones too small and had lost their heat? There's fifty hungry people waiting and looking to me for their culinary inspiration and I'm about to fail: miserably.

Crap. If the heat had stalled and the pig is half-cooked, I'm going to look like an inept moron not only in front of this hungry crowd, but also to my friends.

I decided to push the cooktime one more hour and announced to the group that we would pull the pig at 5pm. That would give me a little more time and push nine hours - which is the recommended cook time for a 75lb. pig. Would I emerge victorious or slump home with my tail between my legs? Time would tell.

After a walking tour around the farm, it was 5:15pm and time to do the deed.

When you pull a pig from the 'imu, you have to be careful. It's hot and steam will give you some nasty burns. So beware! Using shovels, try to clear as much of the dirt off the tarp. Then pull the tarp, trying not to spill any remaining dirt on the mound. Peel away the layer of burlap (they should be dry) and you'll find the plant matter underneath. Happily, the corn stalks were still wet and green which was a welcome sight. The heat was pretty mild so that could be a problem.

Pulling away the corn stalks revealed a beautiful pig lying in wait. The skin was nearly translucent. Heave the pig out by the chicken wire and remove wire after you've gotten to your work table. 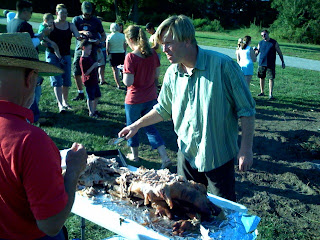 The Spike of Woodberry Kitchen fame working magic on the succulent meat.

Speaking of work table, be sure to have a sturdy table big enough to hold the entire pig cause once you remove the wire, any parts overhanging the table will fall off due to gravity.

Think I'm joking? Grab that foot and turn, POP! Out comes the leg, with no meat. Just the bone glistening in pig fat. It's a miracle.

Taste the meat, it's delicious with the right amount of salt.

Traditionally, we take the parts off and shred the meat before serving. That's a lot of work so I put the pig out and let the crowd go to town on the thing. Meat was flying off the bone, left and right. It was madness. It was delicious madness.

If you're doing this at home and want a very authentic Hawaiian experience, be sure to make some of the side dishes that go great with the pig. Dishes like steamed rice, lomi salmon, chicken long rice and freshly pounded poi.

Enjoy!
Posted by onocoffee at 9:07 PM No comments: