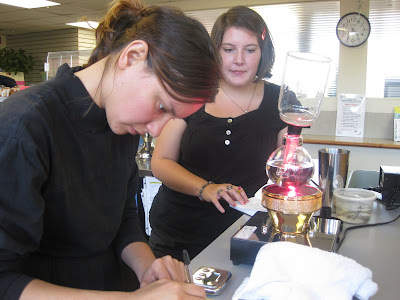 Ilenia and Rebecca work out details on the Syphon.

I don't think that in the ten years I've been in business have we hired such a large staff all at once. Even in the heyday of Jay's Shave Ice, where our ranks swelled to twenty-five, I don't think we brought on so many people at the same time. With only a few weeks to go and my time split between overseeing the buildout and running the company, finding the time to bring everyone up to speed is proving itself to be quite the challenge.

Training to be a Barista for the new Spro is not easy. There's a lot to learn about procedures, philosophy, service methods - and that doesn't include coffee knowledge or brewing skills. It's a challenge all the way around. For the new barista candidates, I push on them tough and high standards. I'm expecting and demanding their best. The first round is easy because they're just learning the ropes and receiving the technical details. As the rounds progress, I become tougher and more demanding. I want them to excel. I'm not interested in producing baristas and coffee that's "good enough" for Baltimore. I'm intent on producing baristas and coffee that will be nationally notable. 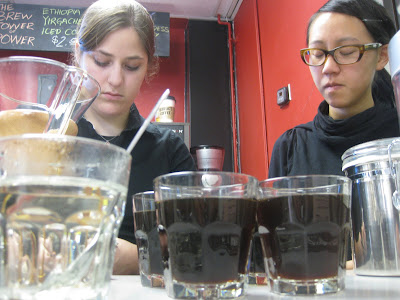 Lindsay and Kimmy ponder the mysteries of the Chemex.

Maybe that sounds egotistical, and since I don't like to lie - perhaps it is egotistical. I want us to excel. I don't want us to be just another coffee house. If that's the case, then I might as well screw off and go back to making movies - at least then I'll be making wild amounts of money while stabbing myself in the neck waiting for The Lord to call me to Pasture.

Personally speaking, I think the field of candidates we have today is a great one. Lots of energy, enthusiasm and potential. I'm excited and enthused that we have such a great group of people. Back in the day of Jays Shave Ice, I used to do personality tests as part of the hiring process and I found it really quite interesting that most of our people back then fell into a couple of personality profiles. While I'm not doing personality tests at The Spro, I've noticed a lot of similarities in interests and lifestyles amongst the new candidates. 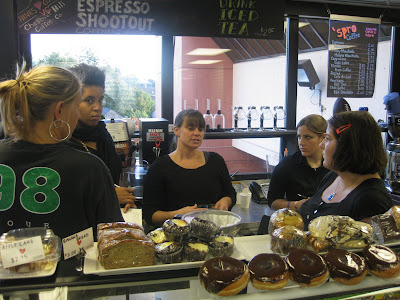 Of course, what I'm planning for Hampden is going to be something a bit different than what the new candidates or most people think a coffee house is about. Our plan is to take things further, to refine and finesse what we do - and, to borrow a term from my barista class in Colombia, do things with Eleganza.

There's a lot to learn and I'm excited for them. It reminds me of the time I spent in Seattle with The Two Johns and Bronwen, learning all I could about coffee and the craft of Barista. Those were fun and heady times and I remember them fondly. While my experience was more casual absorption these candidates are learning our ways in a more structured setting. One that I hope has been successfully designed to build upon each other resulting in a Barista that understands not only coffee and brewing but also service and customer interaction.

For me, it's been a tremendous learning experience as well. Unlike the relatively unstructured nature of training a solo barista one-on-one. Doing a large group has forced me to think about the progression of learning, the structure and how to present the material in a manner that is accessible.

Give us a few weeks then come visit and join us for a coffee.
Posted by onocoffee at 9:03 AM No comments: Links to this post