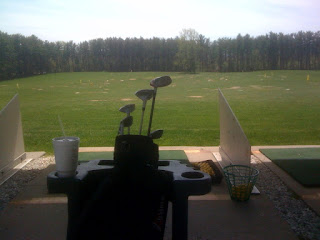 With the weather pushing 90F for the second day in a row, I decided to take out my anxieties by crushing little yellow golf balls 300 yards at a time.

When I was younger, all I wanted to do was crush the ball. Hit that sucker as far as it would go and I would be A Man. But there's more to it than that. Finesse. Maybe I don't need to swing as hard or hold the club as aggressively. Maybe I should relax, swing and nail it.

When using the driver, fewer sounds are as pleasing as that metallic "clink" as the driver connects with the ball, sending it screaming off into the distance. Hear that "clink" and all is good. Hear anything else and it's just gone pear-shaped.

75 balls in the hot sun. It was cathartic. At least it was cathartic so long as I heard the lovely "clinks", otherwise it started to become maddening. A "whook" meant that the ball would shoot off to the left. A "clunk" meant it was jumping up high, going nowhere. A "slap" and the ball sliced off to the right. Was there a difference in performance between the shiny range balls and the scruffy looking ones? I'm convinced there was a difference and that the scruffy balls were conspiring against me.

Maybe it's time to rent a cart...
Posted by onocoffee at 1:41 PM No comments: Links to this post

There was only one person I had to tell first before writing this post.

Okay, I'm not one to make much discussion over media attention but this one has me pretty excited. Just a couple of hours ago, I was riddled with anxiety over recent events but this has helped me refocus my thoughts (for at least a little while).

We were mentioned on CNN.com this morning!

Thanks Tricia for messaging me this morning about it!
Posted by onocoffee at 9:47 AM 1 comment: Links to this post

In The Light of Darkness

It's 5:45am.   I went to sleep at 2:15.  I slept for just over three hours.  Anxiety forces me from my sleep and prevents me from serious and much needed rest.

As the light of day grows longer and longer, the darkness creeps over and my heart is racing.

I've made some decisions recently that I don't know if I quite believe in and it's killing me.  Is it the right choice?  The wrong choice?  Will it spiral out of control?  Will I lose everything?  It's like I've put everything on the line and need to roll the hard six.  As though I'm gambling everything on this one.

The risk is tremendous.  The potential reward is monumental. Win, and I get everything I ever wanted.  Lose and there will be nothing left.  The stakes are high and there's no turning back.

When I'm gambling in Vegas or elsewhere, I'm prepared to lose.  If I lose X amount, I'm covered.  I haven't wagered more than I can afford to lose.  This time, I'm not prepared to lose.  As the darkness surrounds me, I'm scared that I'm losing my way and have chosen the wrong path.

They say there's light at the end of the tunnel.  At this point, I don't know if I'll ever see that light.
Posted by onocoffee at 6:13 AM 1 comment: Links to this post