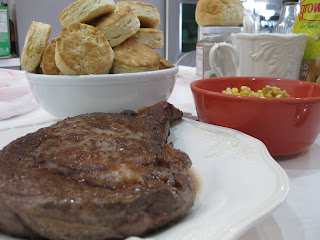 Today, I'm in the mood for biscuits. Southern style, flaky biscuits. So I pulled out Edna Lewis' The Taste Of Country Cooking to hunt for a biscuit recipe. Sure, I could have use Bisquick, but why?

The recipe was simple enough, just lard, flour, buttermilk, salt, baking powder and baking soda. Mix up, roll and punch 'em out. Easy. Problem was, I didn't have lard, just manteca - which I figured would be a suitable substitute.

The recipe went by quite easily but the flavor just didn't hit me the way I was expecting. And the biscuits weren't puffy and flaky. While not quite hockey pucks, they weren't as expected either. I think it's because of the manteca and I suspect that the lard acts like butter in pate brisee, leaving little pockets of air and flavor that give the dough an "airyness." Maybe I'll make it out to the grocery store tonight and try again tomorrow.

Lunch was rapidly approaching and since I had just gone out to the farm to pick up some eggs, I grabbed a ribeye as well. This time, I was foregoing my usual pan fried method for a sous vide approach. Luckily, I already had clarified butter in the fridge so that saved an extra step.

The method is simple: make a hot water bath with your immersion circulator set to 58.0C (roughly 130F). While the water is heating, season the steak with salt and pepper and place in a vac bag. Add a lot of clarified butter to the bag as well. The idea is to "poach" the steak in the butter. If you're fancy enough to have a chamber vac at home, just add butter and seal. If you're cheap like me and only have a FoodSaver, it helps to chill and solidify the clarified butter first and then vac seal the bag.

Keep the steak chilled while the water bath heats. Once the temperature of the water reaches 58.0C, add the bagged steak and let it cook for one hour.

Now, for a nice steak like this, one hour really is all you need. 58.0C is going to bring the meat up to a nice pink medium and nothing more. No medium well. No well done. Once the steak is heated through, it's ready. You could go longer with tougher cuts to break down the gelatins but with a nice steak it's not necessary.

Since it's being held at temperature, the temptation is to believe that you can hold the steak in the bag indefinitely. This is a bad idea and one that I proved several weeks ago with a London Broil that I let cook for twelve hours. The meat was still pink but the result was mealy, grainy and overcooked meat. Not pleasant at all.

When the hour is up, heat up a skillet on the stove to the smoking point. Cut open the bag and pour some of the butter into the pan. Once the butter shimmers, it's ready. Lay the steak onto the skillet and brown both sides. Once they're browned, pull from the pan and set aside for five minutes.

There it is. Done. Ready to go. Simple. Easy. One thing to remember: use less seasoning than you normally would. The vac bag does not allow anything to escape and the effect of the seasoning is heightened. What may be just right for the pan or grill will be too much for sous vide.
Posted by onocoffee at 7:38 PM 1 comment: Links to this post