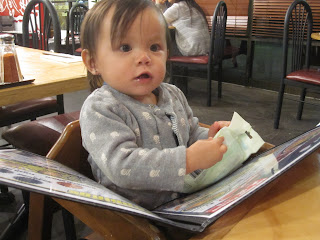 Lucy looks to see what ramen she wants.

Al and Polly lately have been raving about a new ramen place in Gardena. Knowing that I'm a fan of a good ramen and that we have no ramen to speak of in Baltimore, they insisted on bringing us there. Of course, I'm only too happy to comply.

Located in the very Japanese marketplace not too far from the 110 Freeway (and the Hustler Casino), Mottainai Ramen is modern, bright and Japanese all the way. The staff is friendly and the ceiling reaching flames that come from the toasting of miso (I think) is very reassuring. 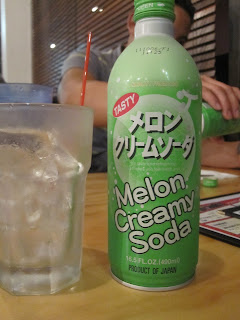 While the focus is on the ramen, there's a handwritten sign advertising their Mini Curry Bowl. I had to investigate.

The curry is traditional Japanese style though a little on the thick side. It's creamy and delicious as a proper Japanese curry should be with generous slices of chicken and fluffy white rice underneath. Excellent 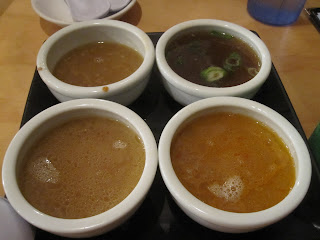 Without a doubt, Mottainai is about ramen. So serious are they that they are only too willing to bring out a broth sample tray where you can taste their four broths to choose from. Miso, shoyu and two types of Yokohama broths compete for your attention but the miso is clearly the champion and the choice of the table.

After a complimentary side of chasu that's thinly sliced and oh so delicate, our ramen arrives. Mine comes with medium boiled egg with a runny yolk that adds extra flavor and texture to the ramen, along with a generous helping of corn butter. Yum! 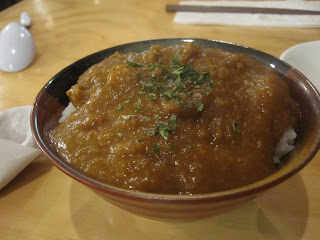 Shake, shake, shake goes the little togarashi pepper shaker and I'm off to ramen heaven. The broth is delicious and everything is just right - except that I find the noodles to be on the toothy side without that usual chewiness that I prefer in a ramen noodle. Al and Polly assure me that this is an oddity because the noodles are usually more chewy. I believe them.

Whatever the case, the broth and extras are delicious and I make a note that I must revisit Mottainai on my next visit - just to be sure. 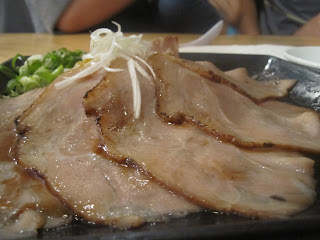 A side of char siu, compliments of the chef. 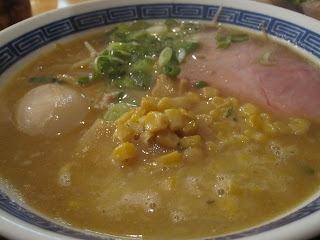 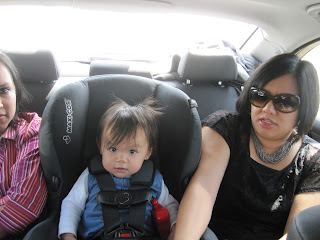 Ana, Lucy and Polly on the way to The Factory.

When Polly called to tell me that we were all meeting at the Cheesecake Factory I could hear the apprehension and apology in her voice - as though I might lash out in disdain for choosing a national chain restaurant. "There's going to be like thirty of us," she reasoned.

My initial reaction was to bemoan the choice, but I understood the challenges of organizing and mobilizing our group of friends and was grateful for the effort. I mean, it's not as though The Cheesecake Factory is that bad. 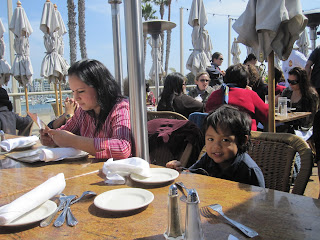 Ironically, I was brought here by my old friend and temporary college roommate, Lisa Garcia. I was visiting and she brought me here - to Marina del Rey and to Cheesecake Factory, way before I even knew what "Cheesecake Factory" was all about. 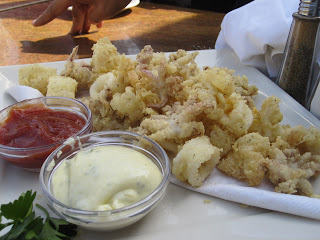 And Fried Calamari it is!

Of course, all I remember was coming here. I don't remember the specifics. It was probably good and I probably left too full like most people who eat at Cheesecake Factory. Who knew back then that the restaurant would become the national powerhouse it is today and that it would take me twenty years to return?

Serendipity. That's the best way to describe a gathering of our friends here in Los Angeles. Jules and Carm live in Toronto, Edennison lives outside of Sacramento, Chuck and Anne live in Las Vegas and everyone just happened to be here on the same weekend. Had it been a few days later then The Bob (Hawaii), as well as Gerry, Vanessa and Rod (Maryland) would have been here too. Had they actually been here, we probably would have had to reserve a hotel banquet room (wouldn't be the first time). 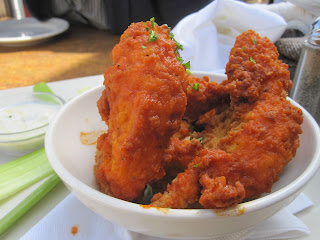 You've probably been to a Cheesecake Factory somewhere. Two hour waits seem to be the standard, as are massive portions and ridiculously large cheesecake slices. Nothing about TCF is petite. Everything is large, and the bread is pretty damn good too.

I don't know what it is about the bread. It's nothing artisan or even "special", it's simple soft textured bread that's probably been leavened with some sort of industrial agricultural product to make it soft and supple, but slather it with the softened butter (wish the fancy restaurants would get this right) and you want to plow through three baskets of the stuff - especially that pumpernickel. 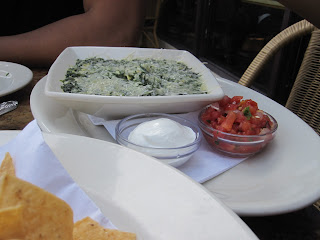 Everything is simple, straightforward and to be expected. Jules is running on about the chicken special and I'm caught up in the frenzy and order one too. When it comes, I find it decent but nothing to rave about. Probably should have ordered the thai chicken pasta, I could use a little panang-style flavors right about now.

The nice thing about our group of friends is that everyone enjoys food, and since almost everyone is Asian, the Family Style thing just comes naturally. Grab a taste or two and pass the plates around. So maybe you were wondering just how that dip tastes like. Fear not, because you're about to try some. 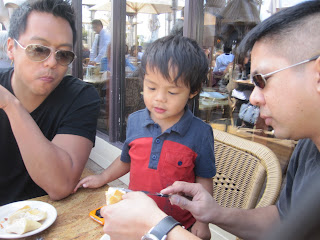 The plates fly, the meals come, parts of them are devoured, the rest are left forlorn on the plate. I can finish barely half of mine, probably owing to the calamari and the generous helpings of the buttered bread.

When dessert rolls around, it's time for the Red Velvet Cheesecake. It's pretty darn good - especially with the side of vanilla ice cream. I went for it because I've had it before and remember it being pretty good. I probably should have tried something more adventurous from the menu, but I didn't. Again, more passing around for a wider range of flavors. 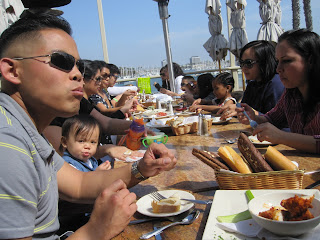 Our friends ponder their bread.

With the kids having consumed their meal, plus a good portion of sugar from the desserts, it's time for them to go ballistic. Luckily, there's a playground next to the restaurant for them to get their fix. There's nothing like watching bloated parents trying to chase after their sugar-riddle children. They should make a tv show about it and call it "Yo Gabba Gabba."

Oh wait, they already did... 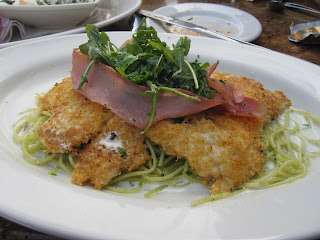 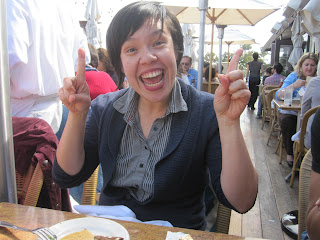 This is Christine's first time at Cheesecake Factory. Seriously. 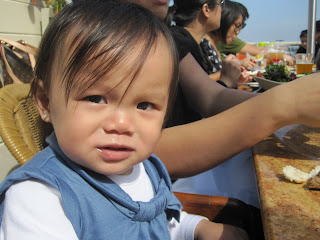 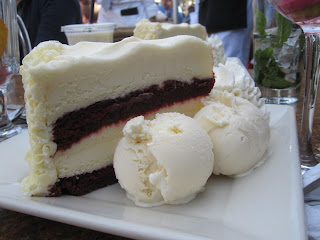 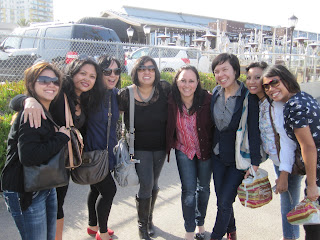 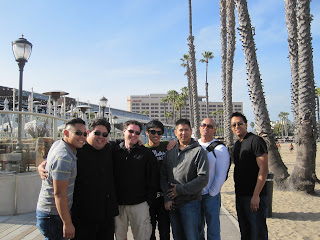