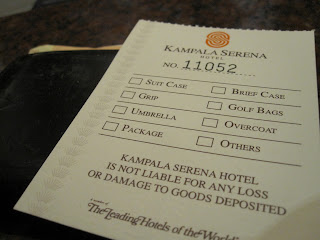 Welcome to the Kampala Serena Hotel.

One of my favorite hotels in the world is the Halekulani in Honolulu. It's a member of The Leading Hotels of the World, which is a designation of some of the finest hotels on the planet and usually an indicator of a hotel which I cannot afford. My hosts here in Uganda have been gracious enough to house me at the Kampala Serena Hotel and it's quite nice.

It's nearly midnight when I arrive after a very long trip so the mind is groggy, but the grounds are reserved and understated. It's luxurious but not in the opulence of say, the Sheraton Addis Ababa. Reserved and unassuming, it's how I prefer my luxury.

Everything is thought out and executed, from the leather-wrapped brass bedside clock to the inlaid woodwork in the furniture. Lovely. And their collection of ethnographic art just lines the walls throughout the hotel. Lovely. I bet they even allow cigar smoking in the lounge. 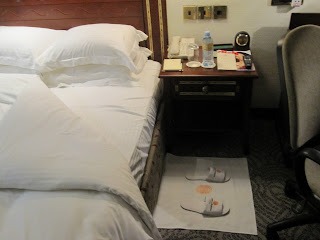 Fresh sandals and a bottle of water await my arrival.

But it's been a long trip here and there's some work I need to catch up on, not to mention that I'm starving for something hot and proper. A quick call to room service nets me a club sandwich that's pretty tasty with fries, hot sauce and a Diet Coke.

I finish my work around 2am and hit the bed for a little slumber. 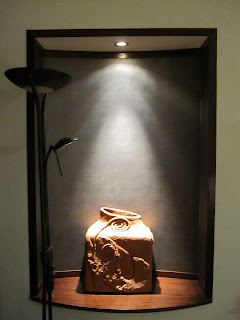 Ethnographic Art in the room. 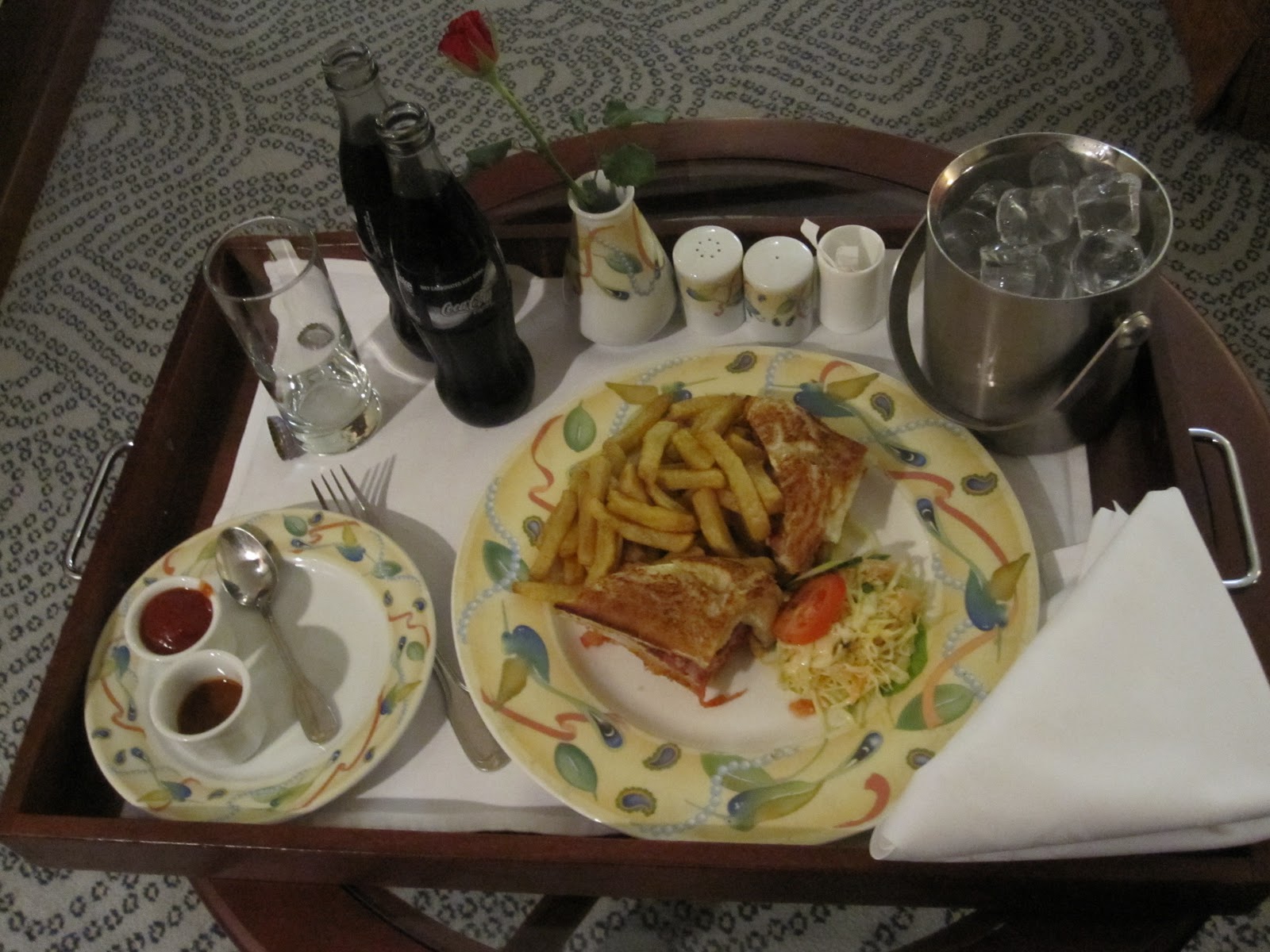 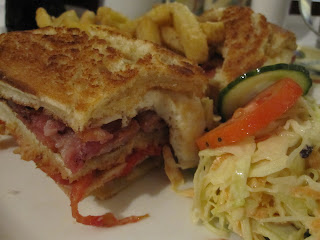 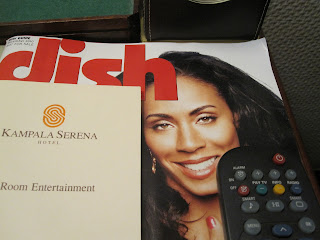 Looks like a hometown girl has already been here.
Posted by onocoffee at 11:55 PM No comments: Links to this post 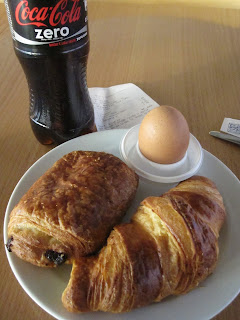 Croissants and a hard boiled egg at Brussels Airport.

Looking at the flight schedule and calculating the itinerary, I came up with a number:

That's a long time to travel. Ten hours. I had forgotten just how far Africa is from my home. 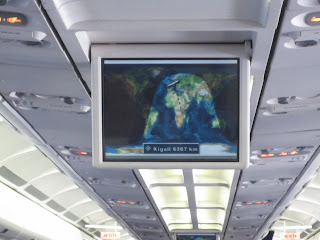 After half a million miles (seat time) of travel, I think I still enjoy it. Well, not really. Now that United (and most airlines) have gotten so cheap with everything, what was once an experience is now just painful. Ten hours. Not fun.

As I was checking in for the flight in Brussels, behind a group of French who had their luggage piled high that I couldn't tell if they were just tourists, going on safari or missionaries, I asked the agent just how "heavy" the flight would be today. She said it's about 49% full - gotta love these Europeans and their efficiencies. Back in the United States, the agent would have said something like "pretty full" or "about half". Here, in Europe, they've got it down to the exact percentage.

I figured I could hijack some seats. 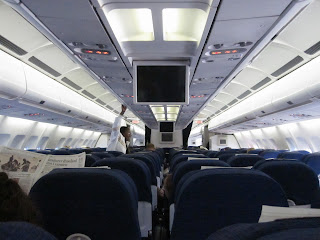 When a flight is flying "light" you have the opportunity to jump your assigned seat and grab an open one. As long as you're not jumping up a class, they usually leave you alone. They do tell you to take your seat and then once airborne, you can change.

Since economy has so many people, it's unlikely that a flight crew will take the time to check if you're actually assigned that seat. First and business? Oh, they'll know if you're an interloper, but economy? They really don't care.

Instead of waiting until we're airborne, or at least the doors have been closed, I opt for a different strategy. I've got a single carry-on that's relatively small, so I try to be one of the last people to board the aircraft. If I'm the last person and they close the door behind me as I board, all the better. It now means that I have my pick of the seats! 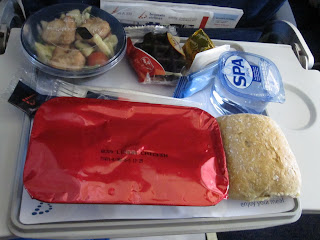 Lunch - that I divided over the duration of our flight.

As I walk down the aisle to my assigned seat: 39H, an aisle seat on the right side of the aircraft with an adjoining window seat, I know that it's full and that I need to jump my seat. I scan the selection of seats and find a completely center open row of four seats: 27D-G and hop in. Serendipitously, it happens to be next to the cute Spanish girl I saw in line at border control.

Now, this is where it gets tricky. How do you hold four seats and discourage someone from sitting in 27D when you're in 27G? Slide over to 27F and place your jacket and carryon in 27E. In a plane with so many open options, you make 27D just a little more unattractive. Happily, it worked. 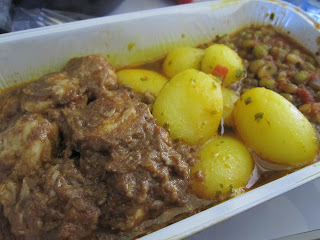 The first hop on our flight was to Kigali - roughly eight hours away. It's God-awful and had I been forced to fly the entire way upright in a cramped seat it would have been absolutely brutal. But with four open seats, I could try to lie down and sleep.

I stretched out across the seats and donned my earbuds (for silence) and blindfold almost immediately after takeoff. I wanted to claim my seats, make no mistake about it. The goal was to sleep (or try to sleep) for two hours. After changing positions four times and not sure if I actually slept, I checked the time. Two hours had passed. Thank you, Baby Jesus.

Another round of trying to sleep ended up killing two more hours for a total of four. That's half the flight gone and I'm not going crazy. Yet. 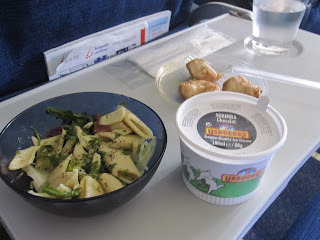 Toss in a couple of meals, the ending of Despicable Me and the entirety of Marmaduke and we're nearly six hours through the flight. Pop open the laptop to watch this weeks episodes of Community and The Big Bang Theory and another 44 minutes has gone by. Fire up the movie Skyline and I'm only 3/4 though when we start our descent into Kigali.

Roughly an hour on the ground in Kigali to clean up the plane and take on a boatload of passengers, so much so that I'm forced back to my assigned seat, and we're off again.

From Kigali, Entebbe is only a 40 minute flight over Lake Victoria. The flight is quick and easy - and I don't have enough time to finish the last six minutes of Skyline before we're landing, going through customs and taking the one hour ride to Kampala.

And Skyline? It's pretty dumb. 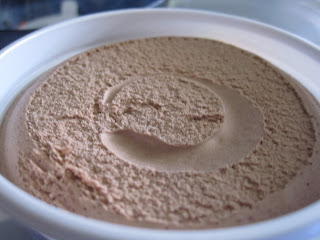 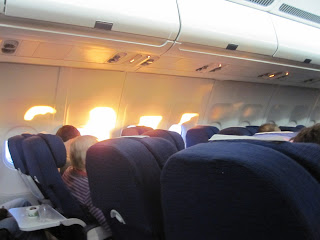 Sunset over the Sahara. 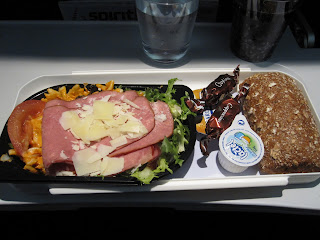 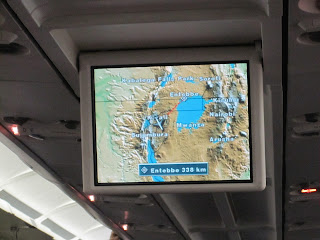 Kigali means only another 338km to go! 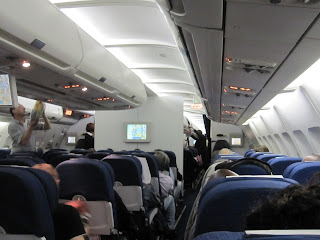 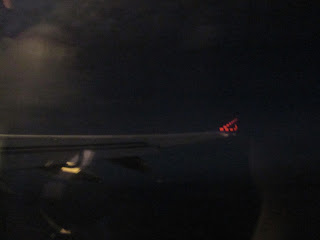 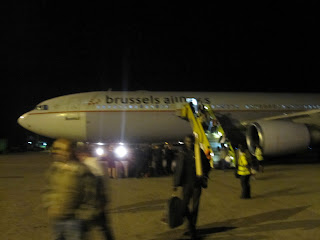 Arrival: Entebbe International Airport.
Posted by onocoffee at 11:35 PM No comments: Links to this post 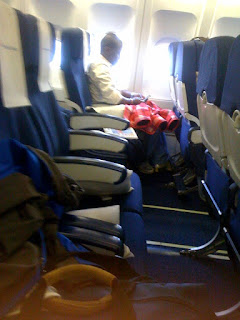 Posted by onocoffee at 4:35 AM No comments: Links to this post 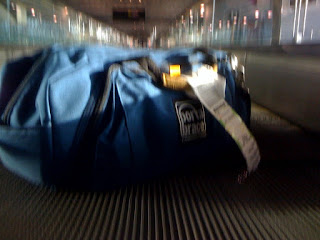 Posted by onocoffee at 4:05 AM No comments: Links to this post