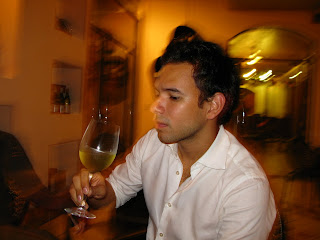 After our meal at Las Colinas del Sur, we headed into the center of Granada for a bit of a respite at the Hotel Granada's Wine Bar. A nice little joint we had all to ourselves and where we indulged ourselves with Rouki's favorite white wine. 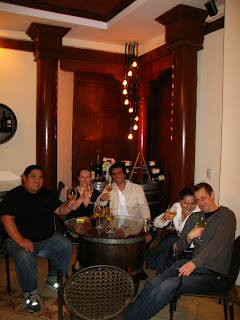 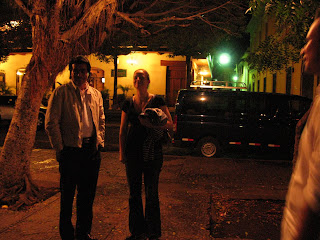 In the zocalo outside the wine bar. 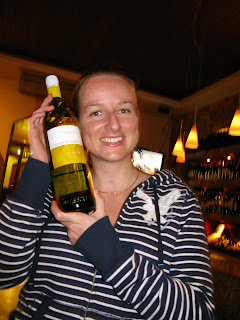 It's her favorite wine. 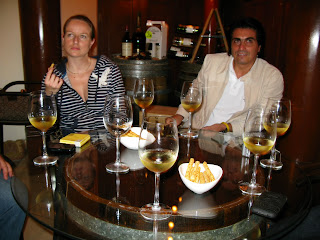 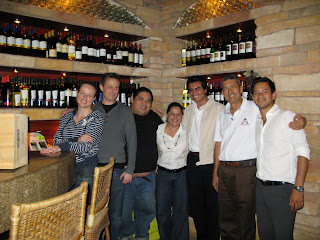 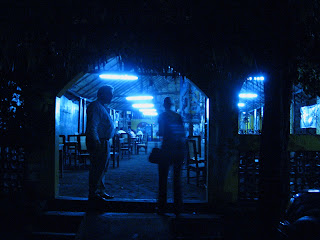 Fellow judge, former contractor and current expat owner of El Coche Cafe, home of the new Nicaraguan Barista Champion Rebeca Ramos, has been raving all week about the bass at Las Colinas in Granada. Regardless of the outcome of the competition, Frank invited all of us for a meal on Sunday to try what he calls the best fish in all of Nicaragua. Needless to say, I'm curious. 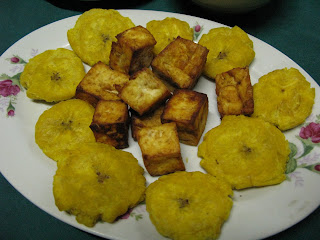 Granada is a town roughly a half hour drive from downtown Managua. Once again, we're whizzing along a two-lane highway in Enrique's Honda CR-V down the road to oblivion. Whether or not we make it, it's nice to be ensconced in leather seats. In case we eat it, at least we will have been comfortable.

Located in what seems to be a remote part of Granada in the dark is evidently close to a lake where the fresh fish comes from. We arrive to find almost all of the El Coche Cafe staff seated at what must be a seventy foot table that runs nearly the entire length of the restaurant(there are four El Coche Cafe locations around Managua, as well as logistics support staff). 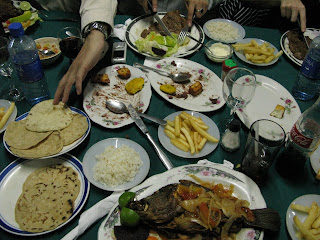 Our spread of food.

After going back to the hotel and bathing ourselves, we're a bit late to the party as the El Coche Cafe staff has finished their meal and is well on their way towards finishing untold cases of wine. Don't these people know they have to work tomorrow? All is well, I guess, since they're celebrating a hard fought win of the Nicaraguan Barista Championship. 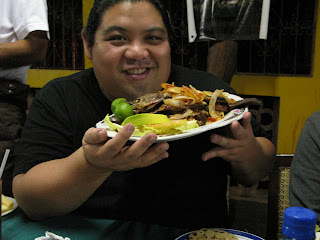 Nothing like fried fish to make a man smile.

The newly crowned champion, Rebeca Ramos, is surrounded not only by her co-workers but also by her three children. From what I've been told, Rebeca is a tough barista. She's lived a tough life here in Managua and won't accept anything without questioning it and proving it first. Whether it's something about her life or merely milk steaming techniques, she wants to know why and she wants to understand it thoroughly. You can tell through those steely, firery eyes that there's a hunger for more, a thirst for knowledge without the egotism and pretense that you sometimes find in those who win championships. 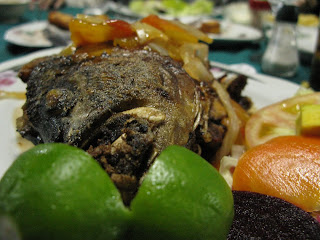 A close-up of my fish.

The meal is set: fish. The best fish in Nicaragua. I'm excited. After a few minutes, the usual trinity of rice, fries and plantains arrives and the meal is set for take off. A platter of plantain chips and fried cheese arrives and, just a few moments after, the fish arrives.

It's a large fish and each of us receives one. Good Lord, this thing is huge. And ugly. The bass is deep fried and then slathered with a salsa of tomato and onions, served with a few slices of tomato and a lime. 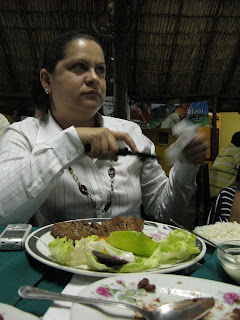 Martha and her steak.

Frank had hyped this fish up so much that it had a lot to live up to. I was expecting fanfare and a dozen virgins. The skin was fried crisp, and that's a good thing, the problem was that the first couple of bites from the lower extremities of the fish had a decidedly fishy taste. Not good but I pressed on.

If I based my entire sample on those first few bites, it would have been a disaster. However, once you got into the meaty parts of the fish, it livened up quite a bit. Tender and moist with a very delicate flavor, the fish was now delicious. It was meaty and thick and just wonderful. The salsa and the lime brought a lightly salty and vinegary acidic twang to the meat and livened it up just right. I haven't had much fish in Nicaragua so I can't say if it was "The Best" or not, but it certainly was good. 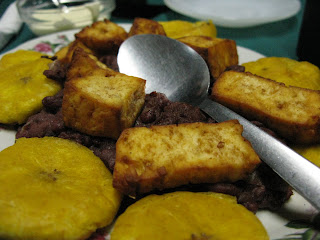 The unfortunate part were those first couple of bites that tasted fishy. And it was right after those bites that Frank asked me what I thought. I know I must have given him a lukewarm answer because I think he was disappointed that I didn't find it to be smashing right away. But it certainly improved tremendously as I progressed into the meat. 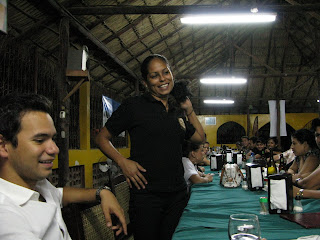 Rebeca, the champion, shares her thoughts.

It was fun spending time with our new friends from El Coche Cafe. They're a fun and passionate group of people who are interested in pushing the limits of quality coffee in a land where the standard is instant coffee. In fact, they're one of, if not the first company to offer Cup of Excellence coffees in a producing country to that country's citizens and coffee drinkers. 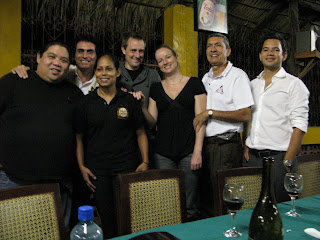 The judges enjoy a photo op with the champion.

We asked Rebeca, the new Nicaraguan Barista Champion, to come over and share her thoughts with us. She's relaxed, comfortable and fun to listen to - even though my Spanish isn't quite up to scratch. And, of course, we couldn't resist having a photo with the new champion. 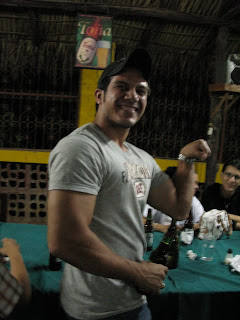 This guy was so stoked, he had to flex.

It was right about then that Enrique broke away from our group, lured away from us by the ladies of El Coche Cafe. When we caught up with him, the women were enraptured by whatever he was telling them. He had an audience, and they all wanted his phone number. When one of them finally broke the silence, asked and received his number, they erupted in celebration. I started to wonder if they would work themselves into a frenzy and start tearing the clothes from his chest. Maybe I could sacrifice myself and let them have their way with me instead. Afterall, I want to protect my fellow judges from harm's way. 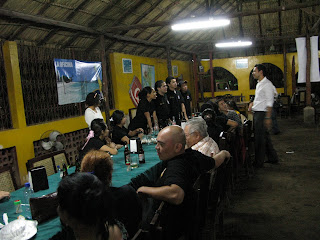 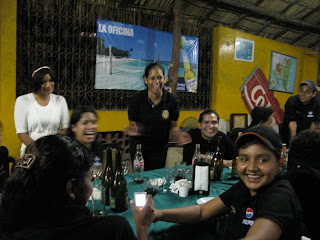 The girls get Enrique's phone number.

Some guys spend their entire lives trying to give their phone number away. How nice it must be to have women fawning over you. 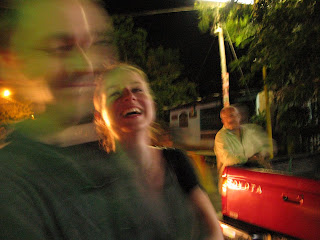 Brent and Rouki outside Las Colinas. 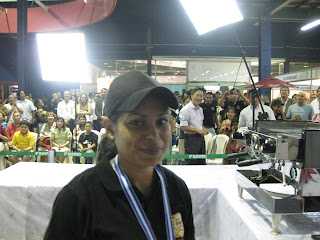 Rebeca just moments after she won the Nicaragua Championship.

More later. First, we're off to Granada for what Frank assures us is some fantastic seafood and bass.
Posted by onocoffee at 6:16 PM No comments: Links to this post