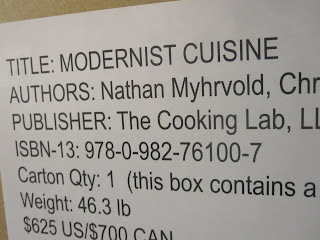 A couple of weeks ago, I come home to find a large and heavy box downstairs at Spro Hampden. It's big and nearly fifty pounds. Goodness. Then I noticed the label. It's the book I've been waiting for since 2009.

During the 2009 StarChefs Conference, I attended a presentation by Nathan Myrhvold and Chris Young that was out of this world. These were some crazy guys talking about some crazy things. They were working on what must be the seminal tome on cooking in the 21st Century. As Escoffier was to the 19th Century, Myrhvold is to the 21st. And it's massive. 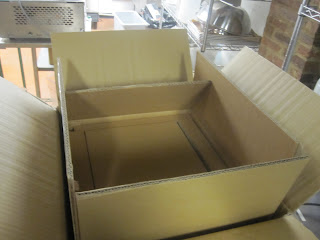 Getting into the packaging.

For two weeks, the box has been sitting on a chair downstairs at Spro. It didn't move. Too darn heavy. I wanted to figure out where to put it. How to transport it. Really, I didn't want to carry it up the stairs. Then it started to rain. Lazy. I'm not going to carry that in the rain. Why? Because I knew that I had to get the thing out of its box.

The box is something else. First of all, there are five tomes placed in a clear acrylic slide cover that is wrapped in heavy paper. The wrapped tomes and case are held in a corrugated padded box with a separately cardboard covered sixth volume, the bound and waterproof recipe book. These are all corrugated padded and then that box is placed in a larger box that is suspended within. Just like the books themselves, the packaging is off the hook. 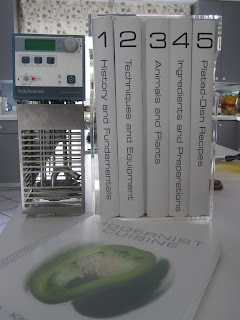 At home with the PolyScience circulator for scale.

Finally today I brought the tomes home. Took them out of their box like the Ark of the Covenant, huffed them up the stairs and into the kitchen at home. Then, more conundrums: where to put the darn thing.

Nothing short of massive can accurately describe these tomes. Until now, the largest culinary book I own is the first edition of Heston Blumenthal's The Big Fat Duck Cookbook, along with Gordon Ramsay's ***Chef and Gisslen's Professional Cooking, Second Edition. Now, those pale in comparison. 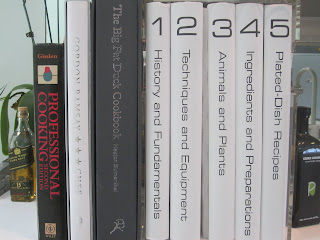 Alongside Blumenthal, Ramsay and Gisslen.

Since I've only just gotten the tomes home, I haven't had the opportunity to really get into them. But the first flip throughs are exciting. Illustrations galore. And lots of information without being too technical or too geeky. My first thought: accessible.

From my understanding, the first run is sold out. Hopefully, there will be additional runs because I hear from some friends that they are unable to obtain copies. The font size is pretty large so I'm guessing that it's scaled to shrink into a smaller format size. I ordered my copy from Amazon back in December and I waited four months so your mileage may vary.

But, if you can score yourself a copy, it's going to be worth every penny.
Posted by onocoffee at 5:40 PM No comments: Links to this post