So Happy I Could Die 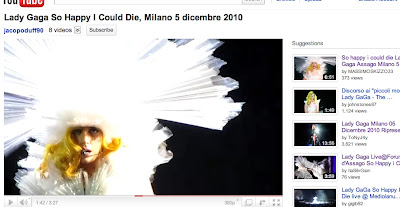 Gaga from the floor of the Mediolanum Forum.

Back when I was going out to concerts, cameras and recording devices were banned and confiscated. To get the snaps we did of Madonna during the Like A Virgin Tour, we had to smuggle in a Canon AE-1 SLR and 200mm zoom lens, pop it out, shoot quickly and then hide it before one of the security people caught us. To get decent photos and/or recording of a favorite concert was pretty difficult.

So, as I was heading to Assago for the Lady Gaga concert last month, I wondered just how the scene would be - would I have to smuggle my camera in? With the plethora of camera phones and HD phone cams, why do they even bother writing "Cameras and recording devices prohibited" on the tickets? Just in case, I loaded up my trusty Canon SD790IS with an emptt 4GB SD card, just in case.

But not to worry. Once inside the Mediolanum Forum, everyone and their mother (literally) had their cameras, video cameras and phones out snapping away and recording the entire concert for personal posterity. I only wish I had brought my 16GB SD card.

In the days of Duran Duran's Sing Blue Silver Tour (which my mom would not allow me to attend and has scarred me for life), the audience carried lighters to illuminate the darkness. Today, the lighter has been replaced by the cell phone screen. A curious and interesting twist in these days when smokers are relegated to criminality.

The beauty of this constant need to record one's life and post it to the Internet also means that you can get a glimpse of the very same concert you saw from different seats in the arena. Want to know what the view was from the floor in front of the stage? YouTube. The cheap seats? YouTube. The seats of those people who spent inordinate amounts of money on "VIP Access"? They've posted their videos too.

And it's not some video from another show that will remind you of your experience. It's the very same show from a completely different view. With a little creative downloading and editing, you might just be able to recreate your concert from different camera angles.

Of course, the difficult part is that these are videos shot by regular people on regular phones (albeit some are HD phones) without understanding of framing, composition and/or sound. Meaning that the camera work is shaky and the audio garbled at times. Not perfect, but a good way to remember the concert.

Which is what I did all last night during the snowfall. Instead of doing something productive, I watched YouTube videos of the Lady Gaga Concert at the Mediolanum Forum in Assago, Italy on December 5, 2010 all night long. GaGa, Oh, La, La!
Posted by onocoffee at 10:40 AM No comments: Links to this post