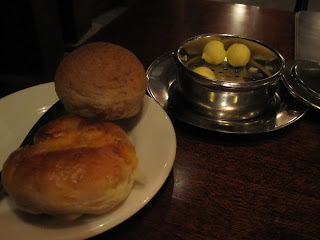 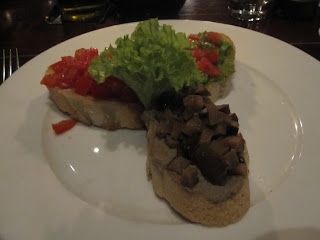 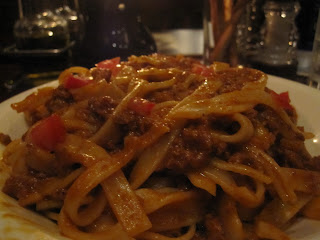 Fettuccine Bolognese
Posted by onocoffee at 10:38 PM No comments: Links to this post 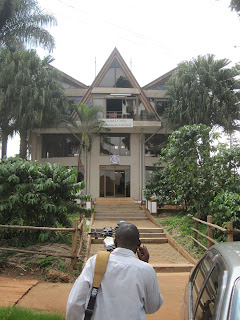 It's Day One of barista training in preparation for the 4th Annual Ugandan Barista Championship. Twenty-two baristas have advanced from the early elimination rounds to go to championships this weekend. The task for the next two days is to spend a little time with the baristas and answer any question they may have regarding competition. Some have competed before but many are making their first foray into the competition.

As a competitor, one of the hardest aspects of competition was understanding what constituted a "3" or a "5" or any of the scores. I mean, what exactly is a "5" espresso? I don't know. I don't know if anyone really knows. In four years of judging national barista championships, I've never even seen a "5" espresso. 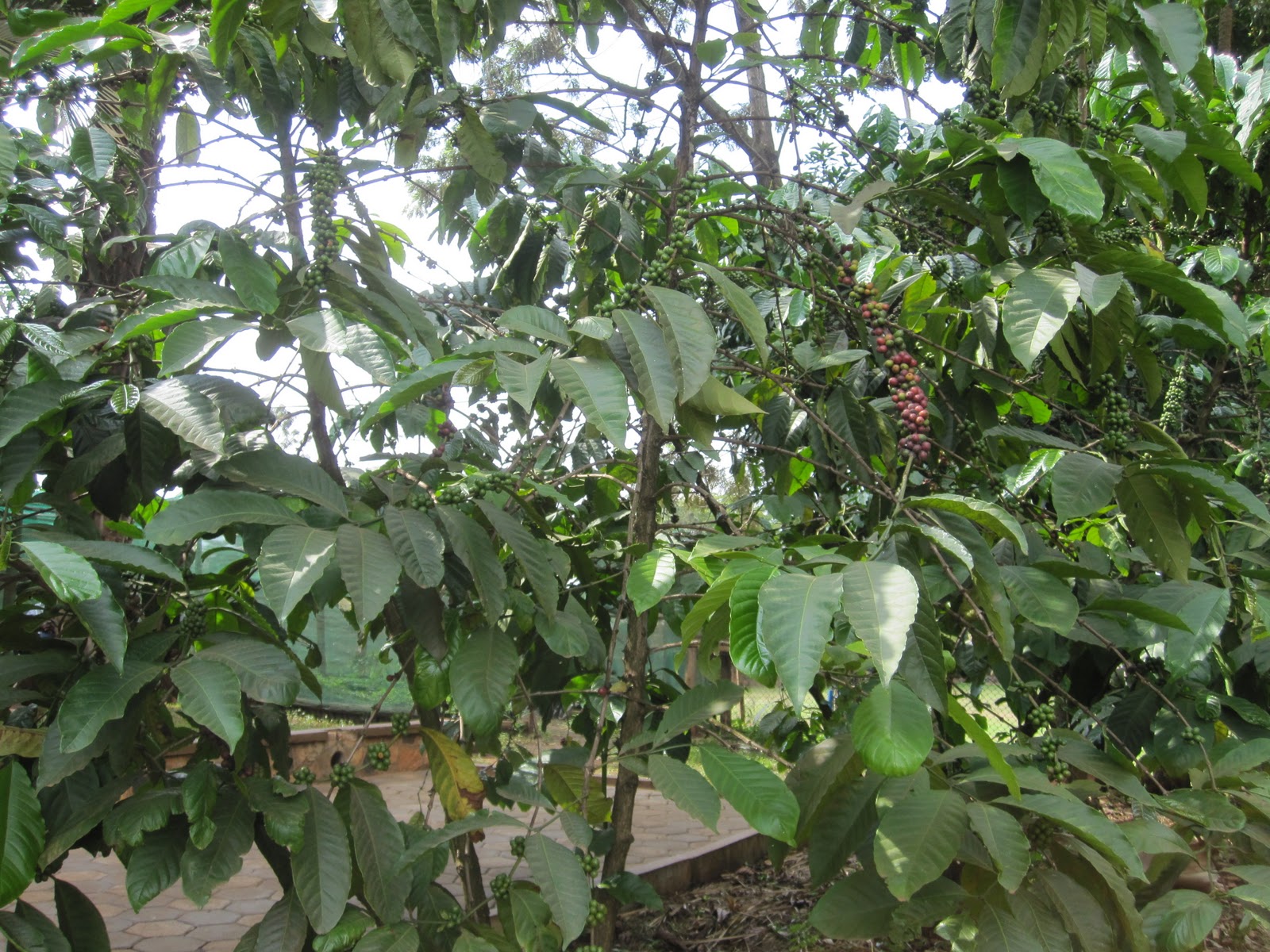 Which is why I don't understand why the World Barista Championship is reluctant to release that nice espresso cappuccino visual guide to the general public. Let it out, I say. Let it out so that people/competitors/judges worldwide can have a common understood language, because your "3.5" may very well be that persons "2.5" and without common reference, it becomes very difficult to make sure everyone is on the same page.

The morning started with an open discussion about the scoresheets, its parameters and their meanings. Break it down, strategize and really figure out whether or not those two points for Immediate Insert and Brew are worth sacrificing for something else. We focused on time strategies and when to just throw it all in and stop. We discussed ideal ways to maximize those 0-6 point sections and which sections used the x4 factor.

I even let it out of the bag that even the World Champions themselves don't get all perfect scores. That it is possible to make it into the finals after going overtime, or that you can win the World Barista Championship with Espresso Scores of 3.5. Then we drilled on identifying and scoring visual aspects of espressos and cappuccinos. 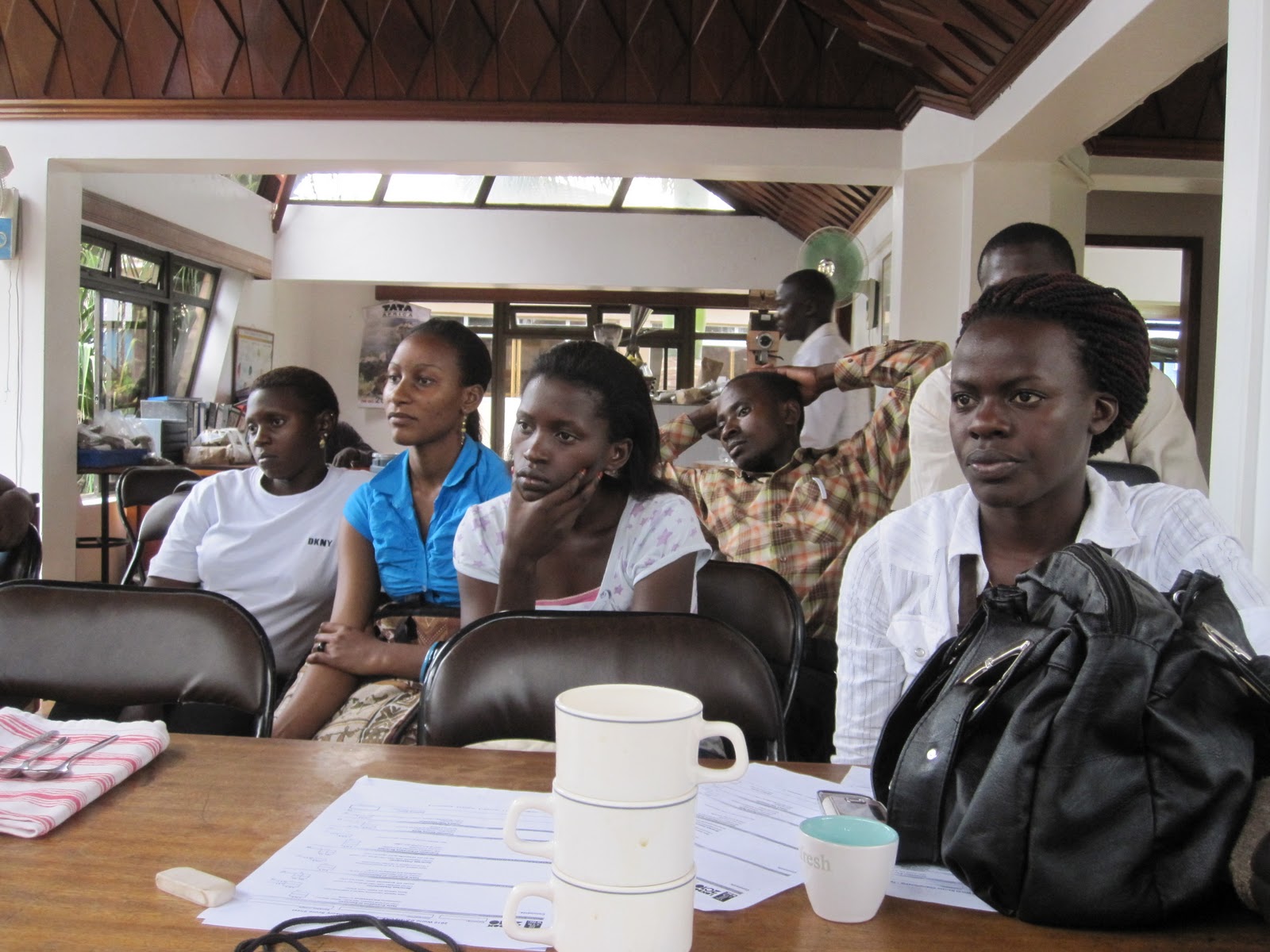 Baristas listening intently to my Science.

After lunch, we watched videos from the 2007 World Barista Championship and discussed the differences in the rules between then and now. From the relaxed and confident presentation of James Hoffman, to the experimental sig drink of Carl Sara, to the sharp and ruthless execution of Heather Perry. Like her or not, the best lessons to learn from watching Heather Perry is her ruthless drive to extract as many points out of the scoresheets as possible. Everything is presented just enough to hit those point factors.

From there we moved on to practical work. The baristas went to work on the SAB Espresso Machines and we spent the rest of the afternoon tasting, scoring and judging the drinks.

All in all, a good day of working with the baristas. The training workshop continues tomorrow at 9:30am. 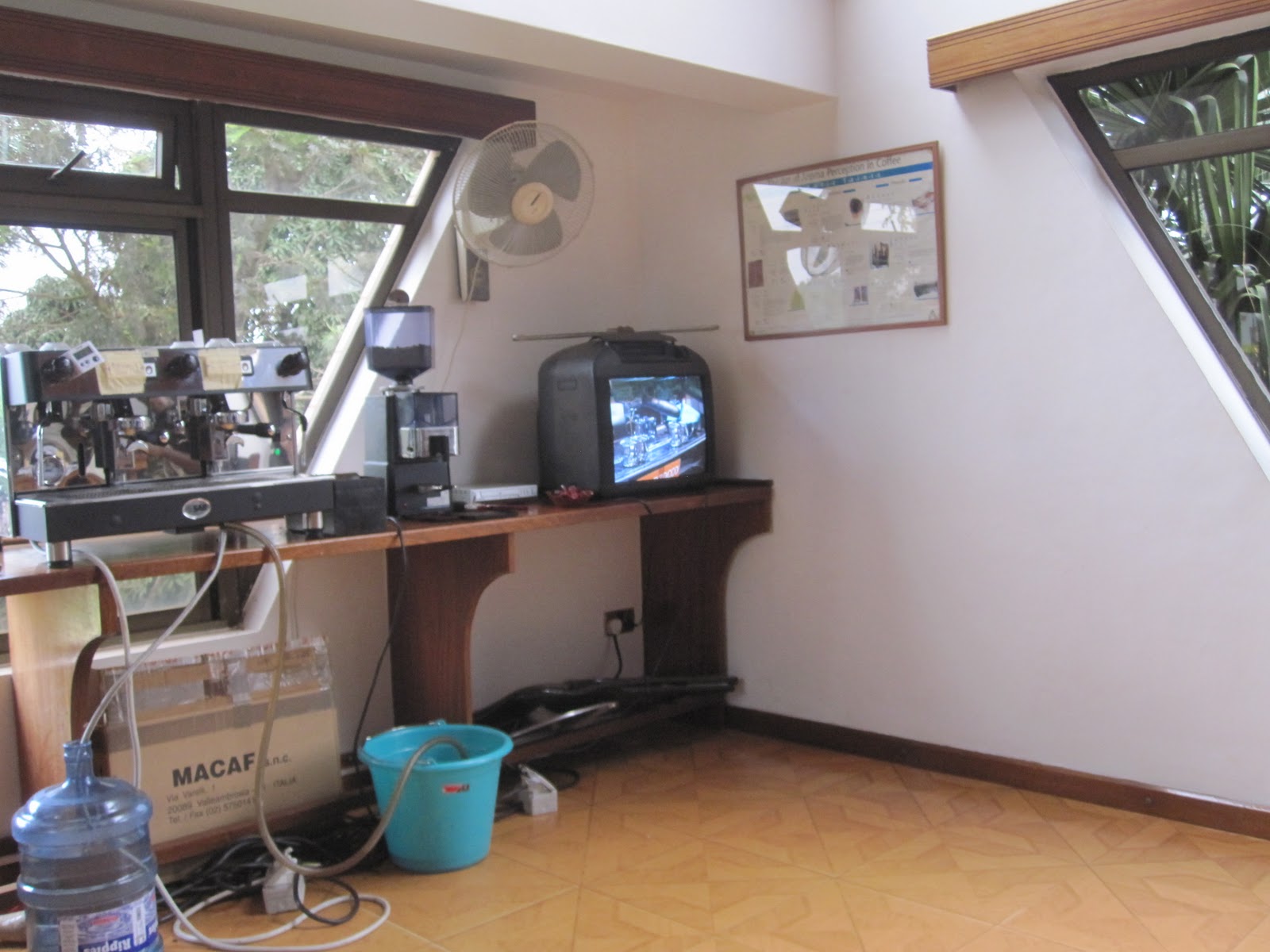 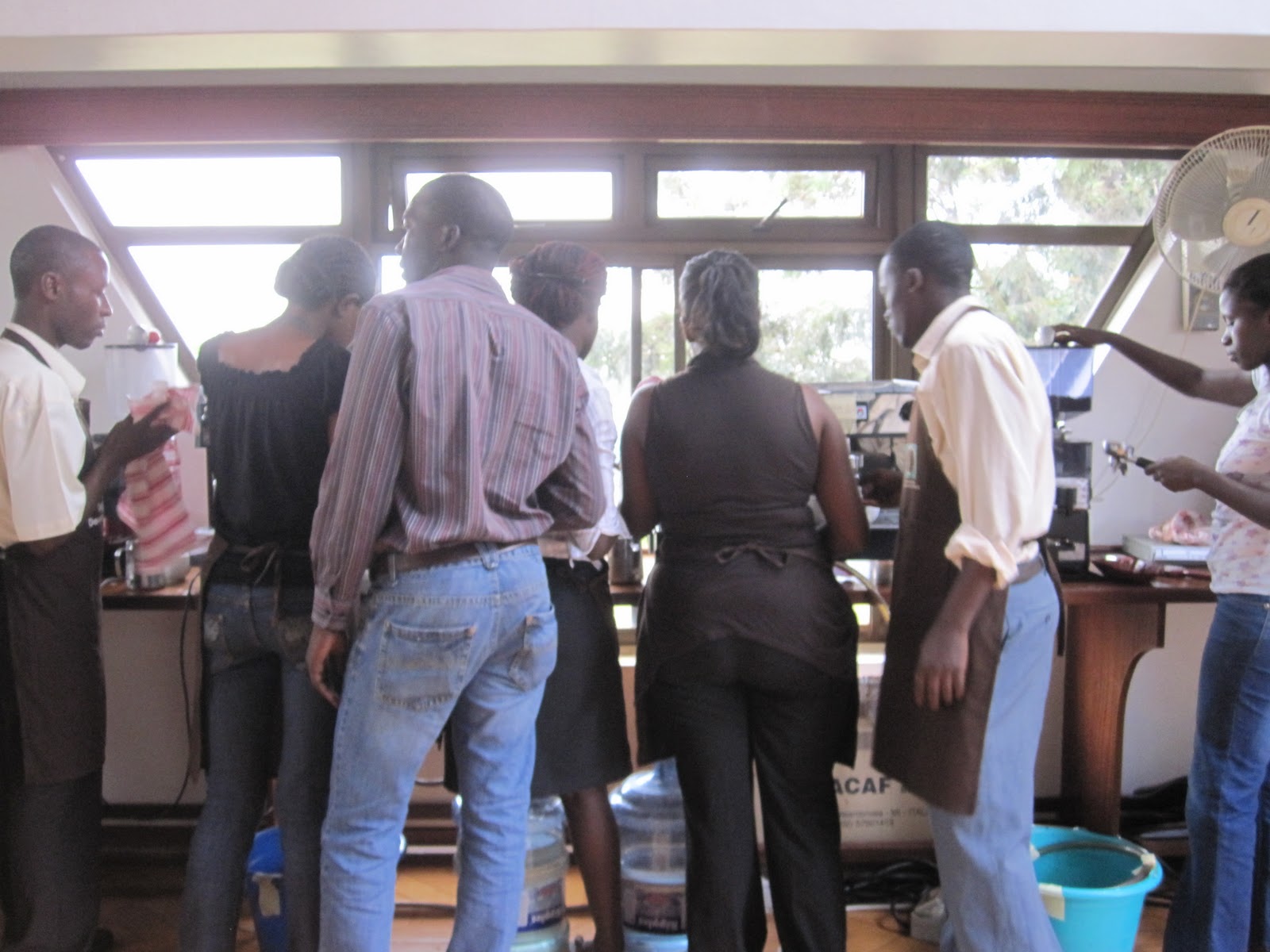 Hands on practicals.
Posted by onocoffee at 5:30 PM No comments: Links to this post 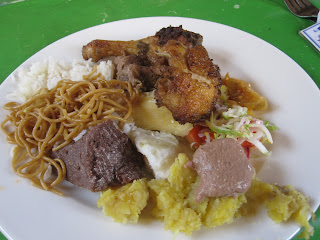 It's lunchtime in Kamapala and what better way to spend it than eating traditional foods? Ugandans are big on starch, big on Indian style foods and big on large portions. Yesterday, Louis commented that Ugandans like their plates big and piled high. I was amazed at the piles I saw at lunch today. How ironic that the biggest guy at lunch had the smallest plate!

I haven't quite learned about everything I ate today, but it's a beginning!
Posted by onocoffee at 2:14 PM No comments: Links to this post

Are You Having Your Breakfast Today? 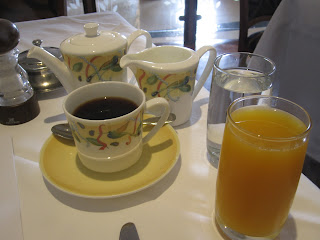 Could this be the best hotel coffee ever???

It's morning at the Kampala Serena Hotel and I'm sleeping in late again. The eight hour time difference between Uganda and Baltimore is really getting to me. Last night, I was up until nearly 4am lying in bed, trying to sleep. It's hard to sleep at what is essentially 8pm. I'm not a kid anymore!

At 9am, I hear the phone ring. Once. What time is it? Crap. Again. Rush, rush, rush to get dressed and then another phone call a few minutes later. This time it's from the barista downstairs inquiring if I will be eating breakfast this morning. The entire coffee staff at the hotel has been anticipating my arrival and while I was thinking it was too late for breakfast, I make a point of it to dine. 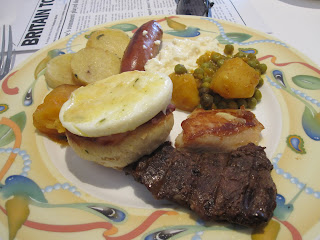 Hotel coffee is usually of reluctant quality. Some of the worst coffee we've ever had was at a hotel somewhere. When they ask, I feel obliged to order coffee. It comes in a ceramic pot and looks sharp. The flavor is surprisingly pleasant. Tasty even. It's good stuff. I would drink it at home. A little sugar and cream to start my day and it's quite nice.

The food is good but feels a bit heavy. Tomorrow it's back to something simple: mueslix, yogurt and a little fruit.
Posted by onocoffee at 10:22 AM No comments: Links to this post