Considering Obama at The Spro 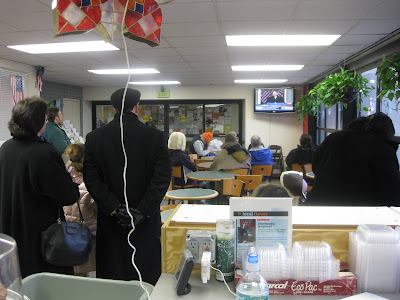 An audience gathers to watch Barack Obama at The Spro.

President-Elect Barack Obama stopped in Baltimore today on his train trip to Washington DC where he will be inaugurated on Tuesday. To be quite honest, I've been cautiously optimistic about Obama since he was elected. So many seem so eager and earnest about Barack that I can't help but think that maybe they've drank too much of the Kool Aid. Will he be the Saviour that many make him out to be? Or will he be the Anti-Christ that brings peace to the Middle East but our collective doom as foretold in the Bible? Only time will tell.

As the day draws near, I can't help but feel as though I'm being seduced by the lure of hope. For as long as I've been of voting age, I've been cynical of government and politicians. It's mattered little whether the politician had an "R" or "D" after their name and state, it's always been the people on the short end of the stick. But there's so much frenzy about him and I've seen a disproportionate number of people older than me with that glimmer of a dream in their eyes when it comes to Barack Obama.

I wonder if it was like this during John F. Kennedy's election? The stories I grew up with painted those years as a modern-day Camelot. A golden era and wondrous time. It's hard not to think that we live in enchanted times as well - and this in spite of prolonged war across the world and disastrous economic times at home.

Of course, I have friends who are die-hard conservatives and the rise of a democrat president is the herald of doom for them. Such a strange dichotomy. And one I'll never understand.

Meanwhile, I remain cautiously optimistic but increasingly seduced by this president from Hawai'i.
Posted by onocoffee at 8:08 PM No comments: