A Day in the Land of Pleasant Living 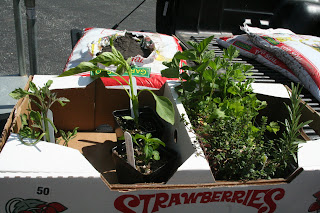 A small gaggle of plants.

It was an absolutely gorgeous day today in Baltimore. One of those days that reminds me of Hawaiian weather and makes living in Maryland enjoyable.

Started off with the weekly trip to the Waverly Farmers Market. Didn't get there until eleven and it was jam-packed. Even last week when we got there at nine, it too was jam-packed. After a winter of shopping at the farmers market with everything for our picking pleasure, it kinda sucks to be awash in a sea of humanity. But at least the produce is looking good. Unfortunately, the peas and asparagus were already gone. But I did score some nice morels, some breads, a whole bunch of herbs, white potatoes, tomatoes (finally!), ginger and a great stash of beef short ribs from Woolsey Farm. Add to that cases of beautiful spring onions, spinach and sassafras root for Woodberry and we were on our way.

For lunch, we decided to give Baltimore Pho another try. Some of you may remember that our first visit there was less than stellar. I'm happy to report that they've stepped it up a bit and the pho broth is rich and tasty. It's got some oomph and I'm looking forward to our next visit. 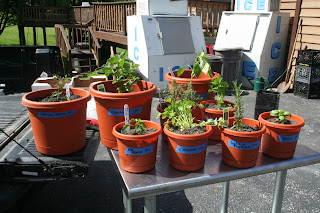 A small gaggle of potted plants.

While at the market, I decided to give gardening a try. Once upon a time, I used to cultivate bonsai. But that was way back in the early nineties and I hadn't done it since. Last year I bought bonsai supplies from Dallas Bonsai but never got around to it. Not too sure how good my green thumb is but I guess I'll find out.

Reid Orchards offers a variety of heirloom vegetables and herbs that are organic and hothouse raised. They're three bucks each. I went with some cilantro, Gorizia rosemary, basil, hot peppers, green peppers, spearmint, parsley and thyme. Repotted them with some topsoil from Home Depot (okay, I know it's not organic but it was only a $1.17 for a 40# bag) and they're off to the races. I'm hoping for an endless supply of cilantro for my explorations in Mexican cooking and some tasty tomatoes but we'll see.

Since it was such a lovely day, I decided that grilling season was open and hauled out the trusty New Braunfels charcoal grill. Now, I've had the opportunity to cook on a variety of gas grills and I have to say that I just don't like them. They just don't get hot enough for me. Sure, charcoal takes forever to burn down to the coals but gosh does it taste good - especially if you're using real wood charcoal. Gas just can't beat it on terms of flavor.

BTW, the only gas grill I would want for home is the professional MagiCater. That grill generates tremendous heat and just kicks ass. 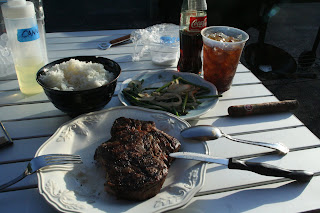 While the coals were still burning hot, I started the seasoning process for a new wok I purchased a couple of weeks ago. Seasoning a wok takes some time so it's a good thing I've got the other wok at the ready. Grilled up a simple ribeye from Woolsey with salt and pepper, then sauteed some blanched almonds, sliced white onions and asparagus in the wok with a little butter, canola oil and salt. Serve with a side of steamed white basmati rice, Mexican Coke and Paul Garmirian Soiree cigar under the beautiful sunshine and all is well.

Not too long after, some friends came over to partake of the grill action. Fresh chicken breasts on the grill with salt & pepper, grilled portabella mushrooms, grilled sweet corn and mesclun salad with a sesame soy vinaigrette (okay, that was store bought). Maria, our burgeoning casual sommelier brought over a couple of Australian reds that just blossomed as we continued drinking and all was well for round two.

Round three brought another friend over with a london broil in tow. He's got a little bit of a different taste than the rest of us and loves to slather his meats in whatever sweet sauce he can get his hands on at Costco. Today's slather was some syrupy sweet jerk sauce.

Add to that more wine, more cigars and lots of great discussion and it was a perfectly pleasant day here in the Land of Pleasant Living.

Hope your day was as enjoyable as mine.
Posted by onocoffee at 11:56 PM 5 comments: Links to this post

Take a breast of lamb (local, farm raised, you know my deal), season with salt & pepper, sear with a blowtorch, toss it into a bag with some Dr. Pepper and some dill, vacuum seal and sous vide for several hours at 58.5C.

I'm thinking about a coffee pairing with the lamb and am trying to understand the Dr. Pepper a little bit more. While I haven't gone out to the store (yet) to pick up a six-pack and Dublin Dr. Pepper (the only Dr. Pepper) is days away (and no, it's not from Ireland), I'm trying to reconstruct the flavors from memory.

They say there are 23 different flavors in Dr. Pepper. Of course, if you believe that then you believe that Colonel Sanders really did use 11 herbs and spices to create his chicken. I'm thinking that Dr. Pepper has vanilla, almond, sassafrass, cardamom, cloves, and salt. My internet readings come up with ideas like: burnt rum, star anise, ginger, black berry, apricot, prune, plum, oranges and molasses.

So why the obsession with Dr. Pepper? Thinking about flavor components in the marinade to play off of in the accompanying drink. How to pair a coffee beverage with the course, that's the task at hand.

If you have any thoughts to share on the 23 flavors or just ideas in general, let me know. I'll report back as things progress.
Posted by onocoffee at 8:08 PM No comments: Links to this post

Ideas In Food On Tour

Blog favorites Aki Kamozawa and Alex Talbot of Ideas In Food fame are taking their show on the road next month and coming down to Baltimore and staging a dinner at Woodberry Kitchen on Monday, June 2nd.

In case you're unfamiliar, Alex and Aki run one of my favorite blogs. They're chefs who met in the kitchens of their careers, fell in love, got hitched and now share their culinary adventures together. They're currently without a restaurant which means they spend their days experimenting with food in their Queens kitchen (the place, not the size). Oh, the things one could do if they didn't have to actually spend their day answering phones, paying bills, managing staff, ordering product, hob nob-ing with the public, not to mention the actual work of cooking or making coffee on the line. Luckily for us, they do the experimentation and we can reap the benefits.

I don't know what they have in store (yet) but I'm sure it's going to be wonderful and interesting. You can see their notes on the event here.

It's going to be a sit-down, nine course meal with beverage pairings. The cost for dinner will be $150 per person and seating will be limited to twenty people. So, if you want to get in on it, contact Woodberry now.
Posted by onocoffee at 3:52 PM No comments: Links to this post

No, there's nothing here about Gordon Ramsay...

I'm too tired, burnt out and irritated to do a full write-up but we went to Hell's Kitchen in Minneapolis on Monday and it was overall a tasty adventure. Some of it was good, if not outright great, but there was a lingering sweetness to just about everything we tasted from the porridge to even the peanut butter (something they're famous for).

We actually went down for Sunday Brunch and were greeted with a two-hour wait. We came back the next day. Along with myself was Bronwen Serna, author Michaele Weissman, Drew Johnson, Shane Devereaux, Matty K., Mike Yung and Toronto Coffee Whiz-Kid and Foodie Extraordinaire Matt Lee.

For our first round, we just ordered a bunch of plates for everyone to sample and share. I'm starting to like that approach. It gives everyone the opportunity to sample a variety of dishes that they might not have had on their own and then everyone gets their own main plate.

I had the king crab in scrambled egg special. It was okay. Nothing stellar. The flavors didn't really pop for me. I think I would have been happier with their Nearly-Classic Egg Benedict featuring slow-roasted pit ham. Matt Lee went for the Wellington Benedict - an unbelievable monstrosity of toasted buttery brioche bread topped with truffled duck liver pate, charbroiled certified Angus beef tenderloin filet, poached egg and a black truffle hollandaise sauce with white truffle oil. Bloody hell.

Made the mistake (again) of ordering coffee. Seems that coffee in Minneapolis restaurants really sucks. I mean really sucks. The coffee is so bad in this city it's remarkable and Hell's Kitchen coffee tastes like hell.

Overall, it was a good experience with nicely done food - even though much of it was on the sweet side. I'd visit again if I were back in Minneapolis. 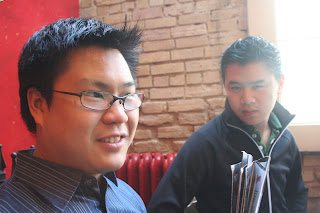 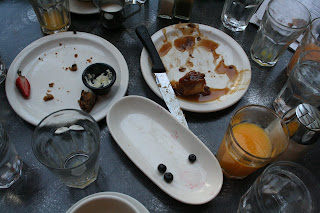 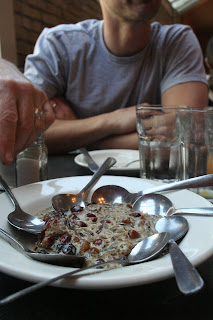 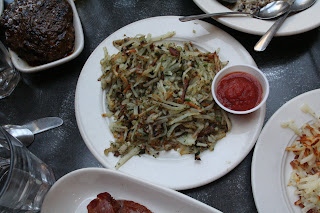 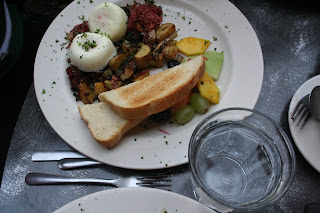 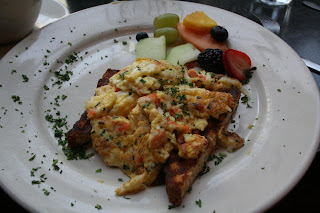 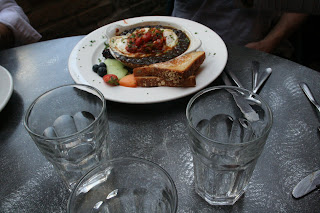 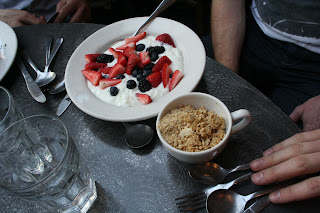 Yogurt with Berries and Granola 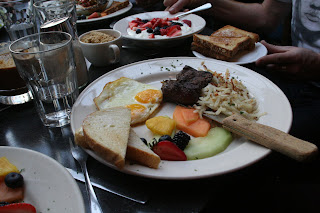 One would think that with a name from Hell one would try to secure the 666-6666 phone number.
Posted by onocoffee at 10:34 AM No comments: Links to this post 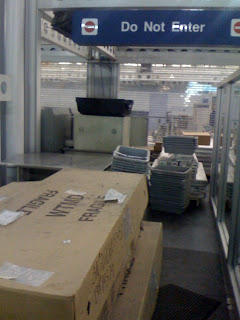 I flew through Chicago on the way back from Minneapolis and noticed these large boxes in the TSA Security Screening areas. They're marked "WTMD." Lord only knows what it really means but the idea that the TSA would be installing Weapons That Mass Destruct (WTMD) was just too ironic to ignore.
Posted by onocoffee at 10:04 AM 1 comment: Links to this post 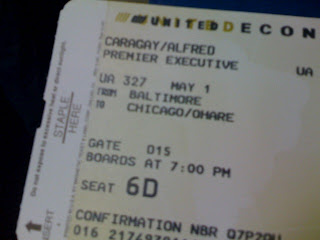 After spending an inordinate amount of time on my ass, in a tight seat, unable to sleep and fighting blood clotting, I'm starting to enjoy the fruits of my labors. Priority check-in, priority screening, priority seating, complimentary upgrades - if only I actually liked flying...
Posted by onocoffee at 10:53 PM 1 comment: Links to this post