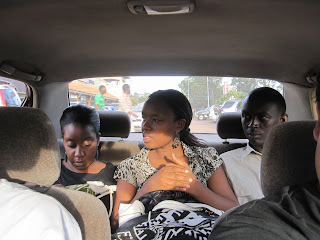 After a day of working with baristas, tasting, cupping, drinking, sampling and scoring coffees, I'm pretty much through with coffee. I can barely drink another cup. It's disgusting me right now.

But our agenda calls for visiting a few more of Kampala's coffee shops and we're off in the little Toyota Corolla in search of something coffee.

I'll let the photos do the talking but we did toss in a meal at Faze 2 and Clare decidedly told me not to go to a place called Speke Hotel (where some Australian dudes told me to check out) because there's lots of "girls" there. Evidently, easy girls or girls "of the night."

So much for that noise. 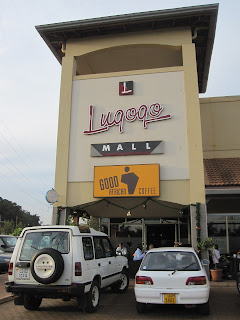 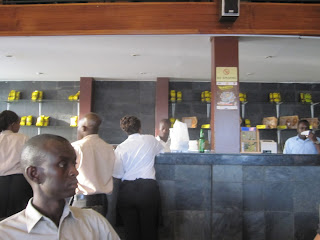 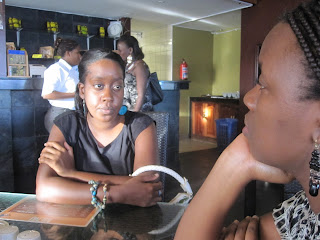 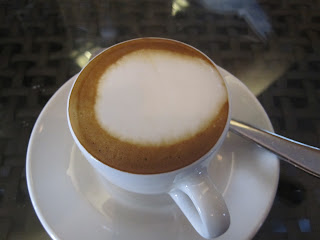 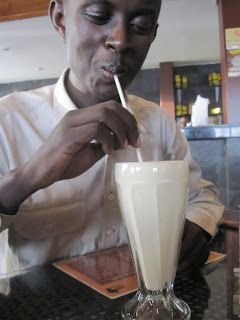 Peter and his smoothie. 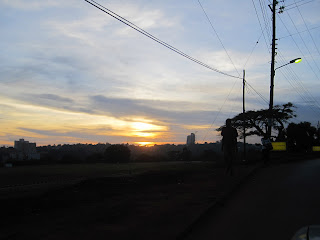 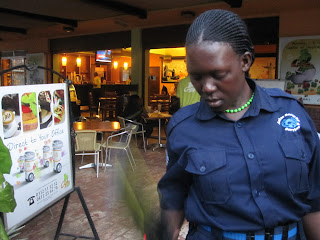 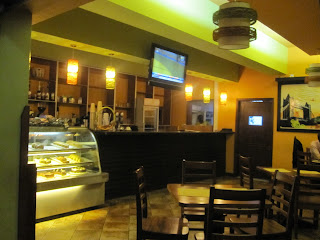 The Bar at Cafe Pap. 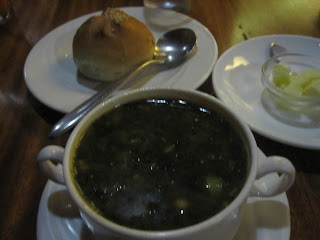 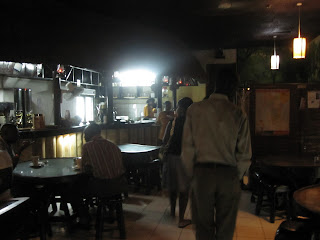 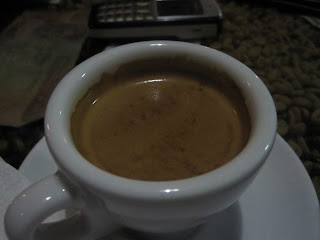 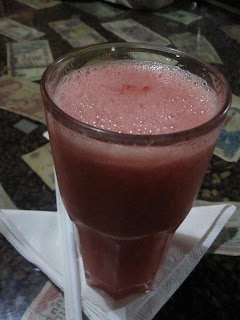 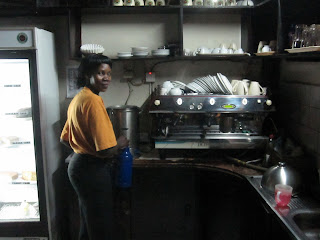 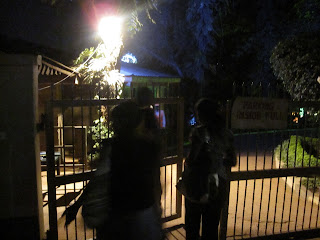 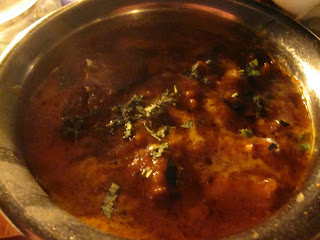 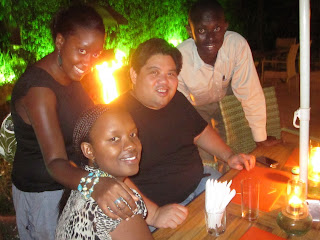 Our Crew: Clare, Rachel, Myself and Peter. 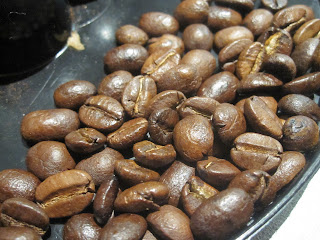 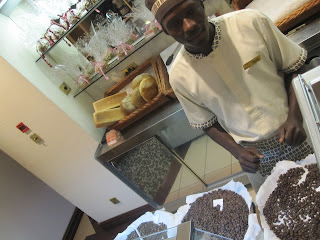 Salim shows his stash of competition coffees for blending.
Posted by onocoffee at 9:47 PM No comments: Links to this post 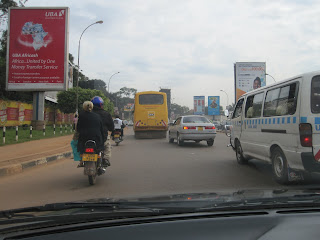 Morning finds its way into my room as the sunlight streams through the open patio doorway and I'm rousted from not so very deep sleep. The clock reads "8:00" and at least I'm not late. After a quick breakfast of yogurt and muesli, my driver is waiting in the lobby and we're off onto the streets of Kampala for the morning commute.

Kampala's traffic is interesting. It's not the urban commuting hell of Manila in the 1990s and it's nowhere near as bad as modern-day Washington D.C., which means it's not that bad overall. The notable thing about Kampala as we careen through its streets with the windows down is the light acridity in the air. It's the same acridity I've smelled around the world in developing nations, in the provinces and in many places I've visited. It's so familiar that I'm nearly comforted by the smell. 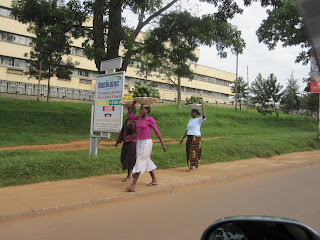 When we arrive at the offices, only a couple of baristas are waiting. In Africa, like many places around the world, "on time" means a little late!

As everyone flows in, things pick up from yesterday. A question and answer session followed by practical demonstrations on how to improve the workflow on the station and a quick course in espresso extraction.

From there, it's open session where everyone starts pulling shots and making cappuccinos. I'm there to simply taste, answer questions, guide and give scores. 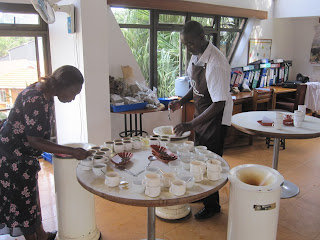 Grading coffee at the office.

I'm not really big on simply telling the baristas their scores. I want them to understand the scores. As a competitor, I always was mystified by the scores. Why this score instead of a better score? We discuss and review each shot or capp. I query the barista about what they would score that drink. I want them to look at their drink as they hand it to their judges and know what their score should be. There should be no surprises. None of this "that's a four" when it really is a two.

They ask questions, they make drinks, they ask more questions and they make more drinks. One of the best and toughest questions asked was if the judges would understand the references in their presentations, like would the judge understand what "blackberry" meant? It reminded me of the times when I truly felt that the judges I presented to in the USBC and its regionals were simply incompetent. Okay, perhaps not incompetent, but certainly lacking in the expertise, skill and experience in coffee and cuisine to properly assess my beverages.

Secretly, I worried that I might certify a judge not equipped to properly judge these baristas. 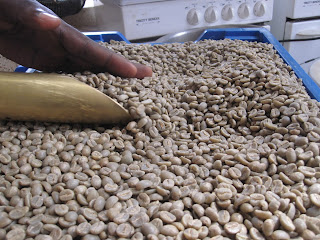 All sorts of questions about flavors, coffees, blends, mixing and more arrives on my desk. Like any barista, they want answers. Yet the only real answer still lies within them. How do you describe the coffee? Describe it as it is. At times, I realize that I'm offering non-answers - the exact answers the baristas don't want to hear. Some simply want to be told that they're offering me a five or six. I ask them for their score assessment and simply confirm whether or not I would allow that score as a Head Judge. Some I ask to defend. 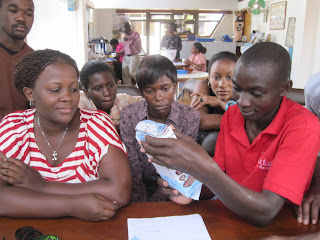 The baristas admire Ugandan coffee from the States.

In many ways, what I've been teaching them over these past two days is a modified Judges Certification Course - without all the sensory and written tests. We talk about scoresheets and their values. We talk about dropping certain scores in favor of others. I remind them that World Barista Champion Mike Phillips only received 3.5 for his espressos and he still won the title (meaning that their 2.5 isn't that bad).

Is the capp hot enough? Too cold? Is this one sweeter than that one? What score should that have? Why? Sometimes I even tell them "No." No way in hell is that espresso a four... 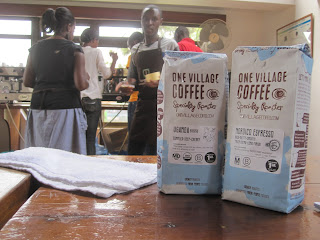 Thank you to coffee sponsors Woody and One Village Coffee!!!

Some make the most of their time while others bide their time. With some, I think to myself: You've got the opportunity to ask questions and work with someone who's been on both sides of this table. The same person who will be your head judge in a couple of days. Ask me anything and everything about the competition and I will tell you. Don't pass up this opportunity. Some do, others don't.

One girl spent most of the afternoon pulling shots but never bringing them to me to evaluate together. Too embarrassed? Another refused to taste the drinks she prepared. I finally told her that I would not taste any drink she wouldn't drink herself.

Mark spent most of the day picking my brains and asking me questions on how to develop his competition blend. Hell bent on using three beans, we cupped the coffees, blended the coffees, pulled shots with the coffees until he arrived at something he liked and thinks can work. Last year, he placed 4th. He's dedicated, passionate and exploited my time for all its worth. I'm happy to be exploited in that way. 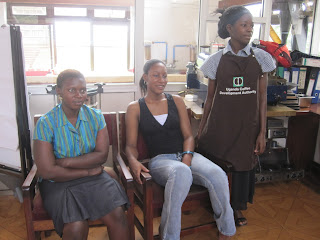 The girls lounging about.

Regardless on how he finishes this weekend, Mark has made a very positive impression and I expect that he will do pretty well. Lots of passion and dedication goes a long way.

Tomorrow is judges training and then the 4th Ugandan Barista Championship begins on Thursday, November 25th at the Sheraton Hotel in Kampala at 9am. Or maybe ten... 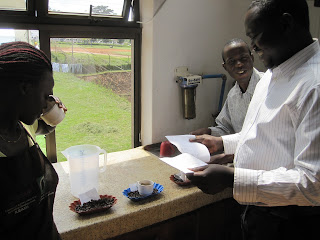 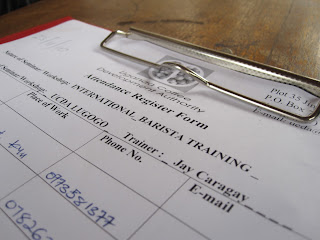 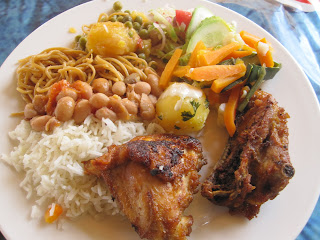 Lunch at Little Ritz In Africa. 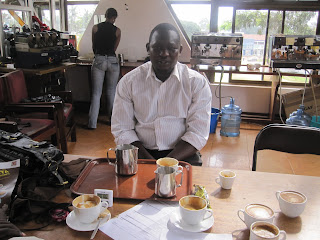 We left Mark pondering cappuccinos.
Posted by onocoffee at 5:41 PM No comments: Links to this post