Hot Dog and The Kebab Guy 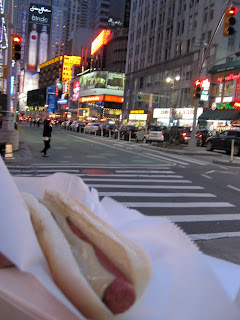 In New York City, they're the ubiquitous street food. I've had dozens of them over years and I don't even live in New York (anymore). A long time ago, I came to the realization that the "perfect" hot dog for me is the Sabrett. As such, I keep a stash in my home freezer for those times when I'm feeling the desire to eat a hot dog - usually in the morning pan fried in butter with fried eggs, rice and a press pot of coffee.

During my last trip to the city, I uncovered the grilled hot dog and I've been thinking about it ever since.

Hot dog carts are everywhere in Manhattan. They're so popular you can even find them at Gray's Papaya, Papaya Dog or any of the seemingly dozens of "papaya" named places (or at Nathan's). This time, I'm at 50th and Broadway heading for the New World Stages to see Avenue Q when I spy the Kebab Guy.

Kebab Guy is like many New York vendors. He's standing by the corner with his stainless steel cart, chatting with a buddy, feeding the hungry masses. He's got a good spot in midtown where lots of unsuspecting tourists happily feed his trade while eating something "authentically" New York. The Kebab Guy sells, of course, kebabs but he also sells hot dogs - because what fool with a cart doesn't sell hot dogs in New York? 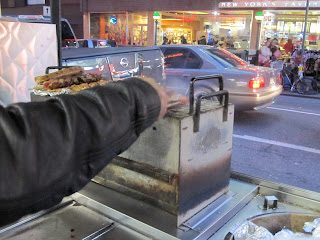 If you're lucky, you'll find a Kebab Guy who also sells Sabrett hot dogs. Lucky because you're about to be treated to a hot dog full of flavor with a skin that crisps just right under fire.

Kebab Guy is waiting for your order. I'm guessing that since he's Kebab Guy, he'd prefer to sell you a kebab. But since you're just another Dumb American, who can't appreciate the difference between a falafel and a coquette, he might as well sell you the hot dog that's been heating in the cart's water bath.

But no, here's where you separate yourself from the charlatans. You like and can appreciate the finer points of ground lamb kebabs, you just want a grilled hot dog. You ask the Kebab Guy if he would grill your hot dog over the hot coals. He gets to use the grill he's so proud of for preparing kebabs and you get a nice, crispy grilled hot dog that's better than anything else.

Add the condiments of your choice.
Posted by onocoffee at 9:32 AM No comments: Links to this post