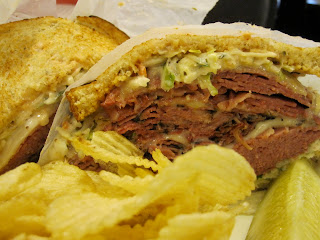 Perhaps about once a year, I get a craving for a taste of the old neighborhood. The neighborhood that I grew up in: Pikesville. The lone Gentile in a sea of Jews. Fly over our neighborhood Christmas Eve and you could pick out our house because ours was the only house with Christmas lights.

Growing up in Pikesville was a unique experience and one that lent itself to tastings of peanut butter and matzoh sandwiches, matzoh ball soup, gefilte fish and the omni-present corned beef and pastrami sandwiches. While this may have been the atypical American Experience, I didn't know any better. It was all normal to me. 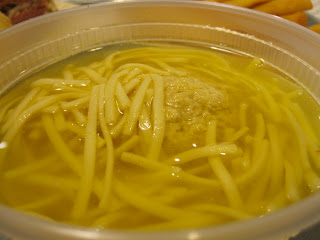 Like I said, every once in a while, I get the craving for real corned beef & pastrami. And when I do, I typically end up at Miller's Deli in the Greenspring Shopping Center. Perhaps Miller's is not as "authentic" as say Attman's or Carnegie or Katz's. But it's usually pretty good, it's in my old neighborhood and that's enough for me.

Eating corned beef and pastrami at a Jewish deli is always an exercise in excess. Maybe it's those many years out in the desert running from the Egyptians and living on what must have been measly crumbs following The Lord, or maybe it's just newfound bounty in the new country, whatever the case may be, the sandwiches are always large, overstuffed and enough to choke you.

I asked the kitchen crew to put a heavy toast on my rye bread. "Burn it," the guy at the counter told his team. Nice. When my sandwich came out it was piled high. And messy looking. Corned beef, pastrami, cheese, cole slaw and a dousing of Russian dressing, mashed between my two burned pieces of rye toast. Excellent. 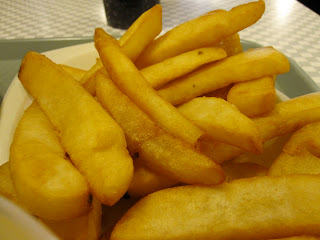 Then came the Matzoh Ball Soup. Nothing tremendous here and I wonder if they make it or simply pour a bunch of canned broth into a pot, add some noodles and some heaping matzoh balls. It's decent but nothing to run for. The fries? Well, sadly they were the worst. Forgotten during my order, the crew fired it up quickly but obviously the oil wasn't hot enough and the fries were grease laden. A shame.

Sandwiches like this make me think that perhaps I should pen a series on The Great Pastrami of Baltimore. This would require constant travel to the various delis and samples of their sandwiches. It's a noble cause but one that I think I should pass on and only attempt on a very casual level.