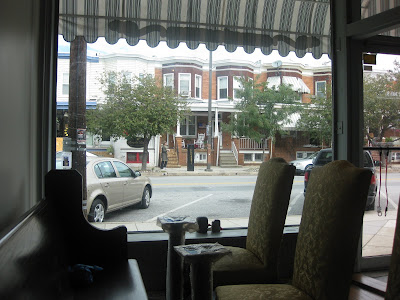 Over the past ten years, I've built out three shops (the original Jays Shave Ice, the second Jays Shave Ice and the Spro Espresso Bar) - well, four if you count the refit of JSI One to open the OnoGrill, and project hampden has by far been the most difficult. From interior designer lameness to contractor flakiness to city permitting delays to phone line problems - if there was a hurdle to be made, it popped up somewhere along the way. Nothing is simple. Nothing is easy.

When we started to get the ball rolling at the end of May, I figured two months would be ample time to get things off the ground, and with any luck, we could open August 1st. Under that plan, I would hire a crew of baristas by the end of June, train all through July, open August 1st and operate for about a month before I had to jet off to host the Western Canadian Regional Barista Competition and instruct at the Expo Especiales in Ibague, Colombia. We would be rolling, I would fulfill my commitments and all would be well in the world.

Once upon a time, a good friend asked me if I thought he should go into business for himself. I told him no. No because he wanted too many guarantees. He wanted everything to be planned out. He wanted his eyes dotted and his tees crossed. I told him "no" because no matter how much you plan, it all goes to hell and then what are you gonna do? You're up to your teeth in the muck and there's no turning back. Screwed or swim. Better to be a salaried employee working the grind for The Man than to actually try to be "The Man." Too many variables. Too much risk.

Ask anyone in business and they'll tell you - you could write the best business plan in the history of the world, but it all gets chucked out the window the day you start business. The plan and the reality can diverge greatly and may never meet.

Which has been the case with project hampden. It's gone off the rails, full speed ahead, quite a number of times. Delay, delay, delay - that just seems to be the Order of the Day. The key is remain flexible and go with the flow. I could gnash my teeth, curse the Gods of Kobol and rant and rave about the house, but it does little good. I could get on the phone and scream bloody hell to the bureaucrats in City Hall, but it would do nothing more than cause them to like me less and delay the project further. My friend asking about business likes to throw in my face some of the stances I've taken in the past but fails to realize that this is why I said he wasn't ready for business: business takes flexibility and very thick skin.

Very thick skin because everyone and your mother (including my own) will cast their questions at you. They think you're crazy. That you're going to go down in a ball of flames. That this idea will never work and why don't you just follow Starbucks. Better yet, go work for Starbucks. Truth is, I'm a raving lunatic who is wholly unsuitable for employment - that's why I have to run my own company: no one will hire me.

But one of the most difficult parts of project hampden has been conveying my vision and sensibility for the project. I'm in the "coffee business" and everyone "knows" what a good coffeeshop is all about. It's all about Free Wi-Fi, couches, earth tones, walnut cabinets and either the Starbucks or "indie" coffeehouse design. What "coffeeshop" isn't about is refinement, luxury and fine dining. Hell, it's barely about hospitality much less fine dining and finesse.

Because of this, I've heard all kinds of "suggestions" from flourescent lights illuminating the awning to more calls for free wi-fi to more syrups to interior design proposals that looked like they sat in the Roland Park Starbucks and took notes. Lots of average to mediocre "suggestions" that it's maddening.

Then tell these same people that you're looking do something refined and with finesse and they think you're an insane lunatic who's unsuitable for employment elsewhere.

Meanwhile, the delays keep pushing the opening further back. From October 1st to November 1st to "sometime before the end of 2009." Each day delivers another obstacle, another delay. But, truth be told, it's a good thing. Truth be told: even if project hampden were completed, equipped and fully-stocked today, we wouldn't be ready to open tomorrow. In fact, we couldn't open tomorrow even if I wanted to and our bank account demanded it.

For the past month, our crew of barista candidates have been busy learning the basics of our craft. They've been cupping, tasting and practicing brew methods and slowly learning the finer points of espresso making, but they're not ready yet. Like fine wine, they need time to mature. To hone their skills, develop greater command over the techniques and develop a flow. They need to "feel it" and roll with it. To paraphrase Jon Lewis: they need to Let It Flow.

Right now, they're like Luke Skywalker on Dagoba with Yoda: learning and exploring, yet not ready to take on Darth Vader. But soon, they will be.