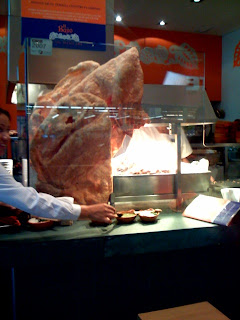 My kind of goodness: large sheets of Chicharon under a heat lamp.

For the past few days, I've been noticing a trend. Ever since I've known Ana, she's always told me that her days start at 5:30am with an early-morning visit to the gym and on with her days. With this in mind, I expect to have desayuno, or breakfast, at a relatively early hour. So far, we haven't eaten before 11am. Of course, with nights that end around 3am, it shouldn't be a surprise, but I digress.

It's Saturday morning and I'm off again with Ana and Tia Cristy to the local mall so Tia Cristy can do a little shopping before returning to Mazatlan tomorrow. There's a couple choices to eat, like the waffle joint but since I can get that back in "The States", I choose the alternative: El Bajio. But that name rings a bell and I check the notes on my iPhone and find that El Bajio was a place people mentioned as being a great place to eat. That's eat, we're going to check it out.

Of course, we're welcomed by large sheets of Chicharon and instantly, my heart is warmed. El Bajio is located in the upscale Parque Delta mall in Colonia Roma Sur. It's a festive looking place and while I'd like to sit and saunter away the afternoon, we do have to get back to the barista competition and decide to sit at the taco bar for quicker service. 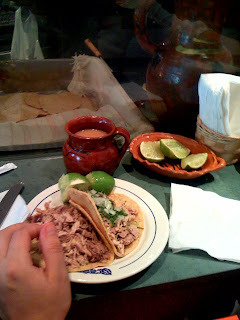 Ana's tacos carnitas and a cup of Atole.

There always seems to be a sweet component to our meals here in Mexico. This time we start off with Atole for Ana and Champurrado for myself. In case you're wondering, Atole is a hot drink typically made using corn masa, cinnamon, vanilla, some piloncillo and, maybe, some fruit. I'm no connosieur but it tastes sweet and thick but it's also my first time tasting it so I have no reference point to compare it with.

In the Philippines, Champorado (note the different spelling) is a sweet chocolate rice porridge and something that I grew up on. In Mexico, Champurrado still utilizes chocolate, but it's an atole-based hot drink that's semi-sweet, thick, viscous and with the slight twang of what might be pepper, but it's so fleeting I really can't tell. 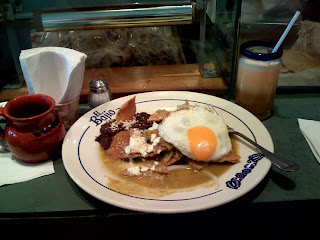 My Chilaquiles with some egg on top and a cup of Champurrado - a most excellent way to enjoy breakfast.

Since we're in a bit of a rush, we order right away. Maybe we'll finish by the time Tia Cristy is finished shopping and we'll be on our way. To start off, Ana orders a couple of Carnitas Tacos that she prepares simply with a little chopped onion, salsa verde and lime juice. She gives me a bite and the meat is soft and heavenly.

If you're unfamiliar with carnitas, it's the richly marbled pork that you find at your butchers called "Pork Shoulder Picnic" that's been slow-roasted for about twelve hours, breaking down the fibers and creating one of the most succulent pork experiences of your life. If served on its' own, the meat is usually roasted at high heat to carmelize the pieces and it's the yin/yang of the soft and crusty meat that makes it so compelling. Ana's carnitas, however, are just the interior pieces for maximum tenderness in the taco. 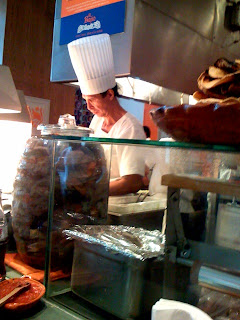 Senor Monter, our Taquero, the man who makes our tacos and who might be Ana's distant, distant relative. Maybe. Well, maybe not.

As we're sitting there enjoying the moment waiting for our food, I notice that our Taquero's last name is "Monter", which is Ana's mom and Tia Cristy's maiden name. I mention this to her and she asks him about his name. The conversation goes on for a couple of minutes as they compare families and (from what I'm gathering), they're not related but the common name is good for a little conversation.

In America, tacos are kind of an afterthought. The kind of food that some minimum-wage victim at Taco Hell is desecrating with ingredients of dubious origins. Here, in the Corazon de Mexico tacos are serious business. As I watch Senor Monter, I notice his deliberate and calculating motions. He's a work of art. A few slashes of the knife here, a flick of the tortilla there, for the person who can appreciate craftsmanship, it's a pleasure to watch. Senor Monter is at the top of his game and he's not allowing ground beef anywhere near his taco kingdom.

As they say, the proof is in the pudding and judging by Ana's tacos, he's the bling-bling of Taqueros. 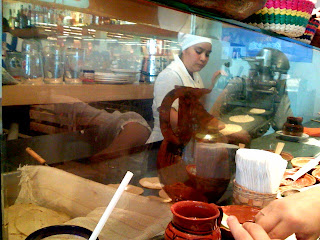 According to Ana, the only tortillas worth eating are the ones made fresh for you.

In the relatively short time that I've been in Mexico City, I've become a sudden fan of Chilaquiles. First, Ana told me the tales of the tortilla chips simmered in salsa, then I tried a decent if slightly soggy example at the Crown Plaza for breakfast. Not bad, but not the perfect example. Then, it was the torta from Chilaquiles On The Move. Again, a tasty effort that was a great start to my day. 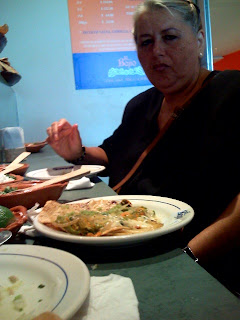 But this time, the Chilaquiles were what I would have been dreaming about - if I knew what to dream about. Covered in salsa verde, these Chilaquiles were (to my palate) perfecto. Just the right amount of sauce and simmering to infuse and soften the chips without making them soggy. They still had that satisfying crunch, a perfect balance between the crunch and the soft. Amazing. Saddled with some refried black beans and topped with a little grated cheese and the ubiquitous crema, it was wonderful. Add to that a beautifully fried egg on top and it became sublime. Just the perfect crescendo. Remove one and the structure would fall.

From this point forward, when I dream of Chilaquiles, I will dream of this moment. The perfect balance of crisp and softness and a beautiful woman by my side with her leg leaning on mine, translating the world around me.