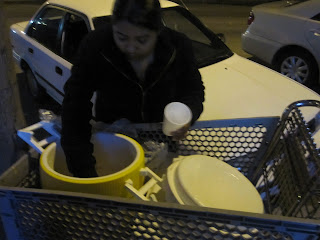 Just outside of La Favorita Bakery is a lady with a shopping cart. Inside the shopping cart is a cooler filled with chicken, pork and cheese tamales, and a large container of hot champurrado. How lovely.

It's what's missing in Baltimore. Street food. Comida Corrida. We need it. We must have it. But we don't, which is why I travel. 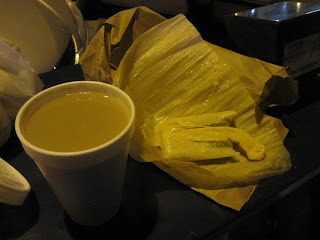 Who would have thought that the combination of sweet corn fortified spicy champurrado would pair so beautifully with a cheese tamal? The Mexicans evidently, who have probably been laughing at us gringos for generations.

But oooh, the tamal... delicately sweet, lovingly savory with just a hint of spicy trouble from the peppers and a little bit of salty goodness from the cheese. Pair that with the thick and hot champurrado and you've got yourself a winner.

That might have to be a fall menu item at Spro... 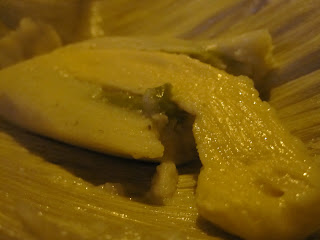 Close up of our tamal with cheese and pepper - rico! 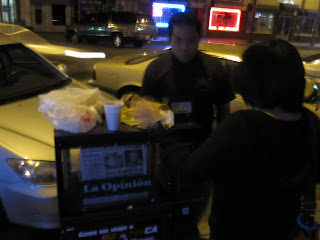 A little street picnic.
Posted by onocoffee at 8:35 PM No comments: Links to this post 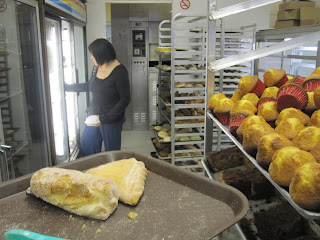 Next door to Bruddah's is a Mexican Panaderia named La Favorita. Polly wanted Tres Leches cake and I, of course, wanted to see if their conchas compared to that of Bondy in Mexico City.

The concha is actually quite good. Sweet and delicate in flavor but the texture is slightly grainy and not the smooth luscious texture that is a Bondy concha. Good but not quite the same. But it would be delicious with a nice cup of coffee. 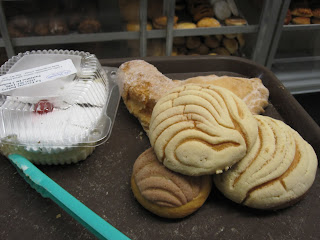 Our stash in need of coffee from Chiapas.
Posted by onocoffee at 8:15 PM No comments: Links to this post 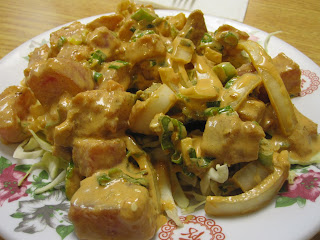 There are lots of Hawaiian joints outside of Hawaii, but few are as transcendental as Bruddah's in Gardena. Truth be told, the interior is nothing special and it's kinda like you walked into some average joint in Kalihi, but the food is stellar Hawaiian/Local food. 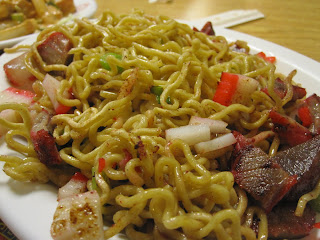 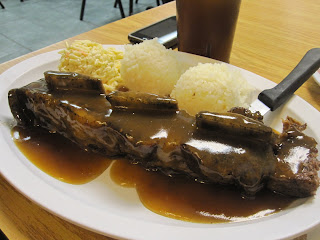 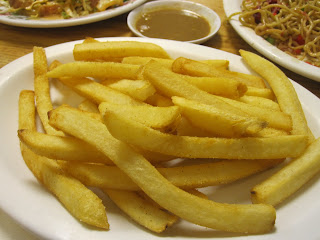 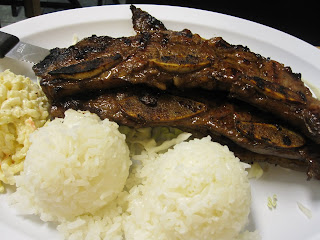 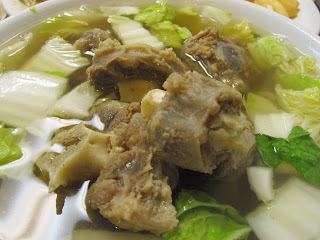 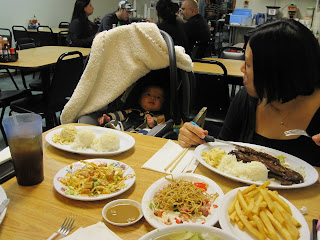 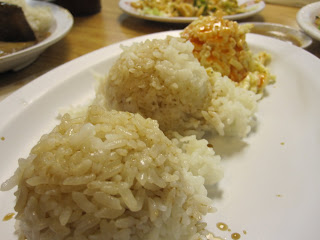 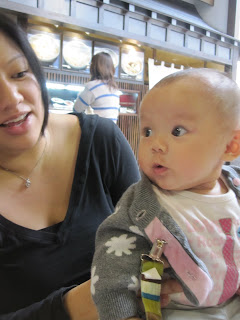 Gerry decided to rise from his slumber in Woodland Hills to make the trip down to Torrance for ramen and what better place to go than Santouku in Mitsuwa Marketplace. Since Polly and I were just here the other day, it afforded the opportunity to try other things in the food court.

I'm a big fan of Japanese food and I could literally have lunch here all week long and not run out of things to try. Today's choice was a tough one: katsu curry or katsu donburi? Very difficult and one should never be faced with such difficult choices. Do I use the Eenie, Meenie, Miney, Moe theory? Draw straws? Flip a coin? It's such a difficult choice and it would be foolhardy to chintz out and order both. 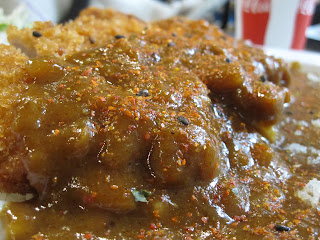 In the end, I went for the katsu curry with side salad, just because. I'm a big fan of Japanese curry. If you haven't tried it, it's very different than Thai or Indian curries. It's more mellow but oh so tasty. Nary can I pass a Japanese curry house and not stop in for a bite. 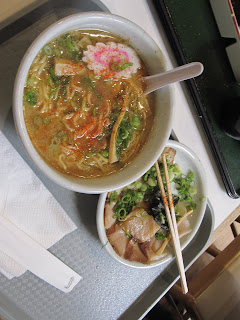 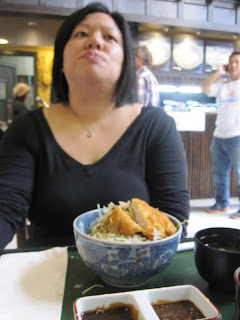 Polly went for the tonkatsu don.
Posted by onocoffee at 11:25 AM No comments: Links to this post 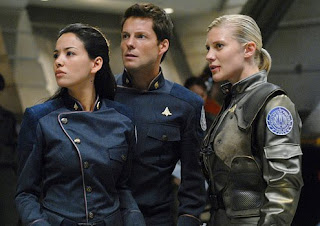 Stephanie Jacobsen as Kendra Shaw with Apollo and Starbuck on Battlestar Galactica.

Okay, feel free to call me a geek because I finally figured out why that girl at Intelligentsia Venice Beach had me so intimidated the other day. She was the XO on the Battlestar Pegasus in Battlestar Galactica: Razor and her name is Stephanie Jacobsen.

I had been racking my brain all day long trying to figure out where I had seen her before and it wasn't until my 3am drive down the 110 Freeway that it hit me: "She's frakking Kendra Shaw!!!

After ten years in The Biz, it's very rare for me to get excited about an actress or celebrity. But ever since I saw her on BSG, I was a fan - not a very good one since I didn't recognize her straightaway, but a half-chinese, half-white girl with foreign accent? I'm in love and I'm intimidated enough not to approach her at a coffee shop, evidently.

Geek. Lame. Fail.
Posted by onocoffee at 10:40 AM No comments: Links to this post 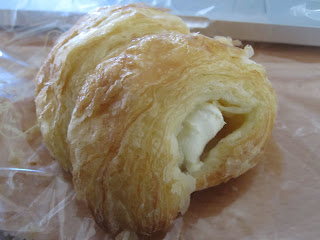 Ham and Cheese Croissant from Monmouth Bakery in Gardena.

There's something I always like about Japanese bakeries. They're kinda French but with a serious twist. One thing I cannot get enough of is Japanese style white bread. The fluffy interior and the crusty exterior. It's white bread perfection and when toasted to a nice crisp and slathered in butter, there is nothing finer.

Sadly, there isn't a Japanese bakery anywhere near Baltimore, which means that I'm left with having to travel to distant cities with sizable Japanese populations for my white bread fix. Not exactly a hardship, but not something I can have on a regular basis. 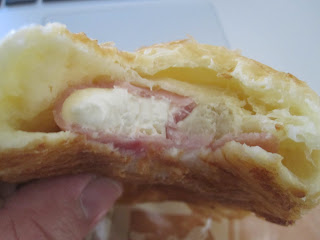 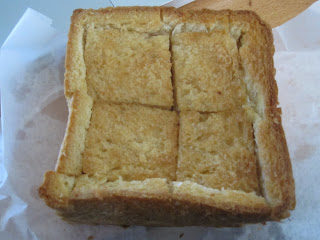 Honey Bread - one of my faves.
Posted by onocoffee at 8:30 AM No comments: Links to this post 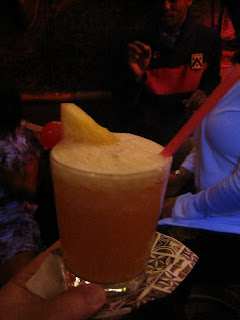 The Lapu Lapu - I have no idea what it is but two is not advisable.

After a night of drinking with Liz, a smart person would have immediately gone to bed. Sometimes, I'm not that smart.

Instead, I met up with the crew on Sunset at Tiki Ti. A little tiny joint that's the size of a living room (seriously) and serving up some serious tiki style drinks. This place is a throwback to an older era and the mixed concoctions are sweet, balanced and stiff - very stiff.

The Lapu Lapu literally tastes like Hawaiian Punch, but if you have more than one, be prepared to be punched. 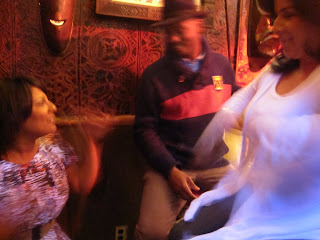 The earlier part of the evening is already hazy and now it just gets surreal. After Tiki Ti, we head down Sunset to El Cid where a Morrissey/Smiths cover/tribute band is rocking out to a group of twenty-something Latinas. Evidently, Morrissey and the alternative 80s music is big with the Latino scene here in Los Angeles.

We're downstairs at El Cid and suddenly, it's like 1987 all over again. The styles are diverse but the crowd is decidedly Latino. Girls have that rockabilly or 1940s style to them. Latina with cool hair, cool clothes, lots of style and 80s alternative music? What more can I ask for in life? I've found my own little slice of heaven in Los Angeles. 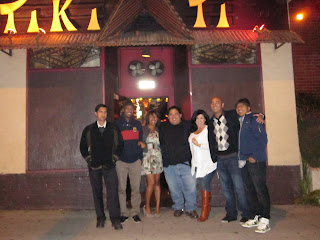 At Tiki Ti with Joe, David, Brandy, Arlene, Allen and The Bob.

Truth be told, I was never a big Morrissey fan, but I do like stylish Latina girls, therefore I'm not complaining. I'm not that dumb.

I think at this point is where a fight broke out and somehow DJ Un-G stepped in and ended it. He's got some sort of mystical, martial arts master kind of power that he channeled to end the fight. One minute, some guy is on the ground getting pounded - hard. The next, Un-G is there with just a word that causes everyone to stop. Even with my dulled senses, it was amazing. 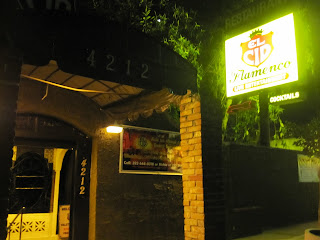 As we stood outside chatting with some of the girls, I wondered just how this scene developed. How does twenty-something Latinos get this into Morrissey? And mix it in with a little rockabilly and 1940s Chola style?

It's a scene that I plan on investigating more... 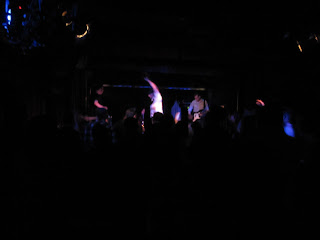 "I am human and I want to be loved... just like everybody else does..."
Posted by onocoffee at 2:09 AM No comments: Links to this post