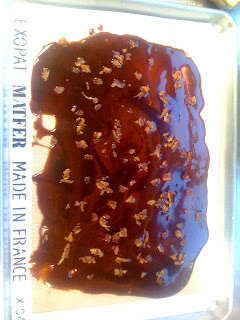 It's barista competition season once again here in America and while the rest of the barista nation has been hard at work developing their signature drinks in a bid for the national crown, I've been doing something else. And now that an actual competition is upon me, it's time to get busy.

Of course, this is a recipe for disaster and I've been chosen as the guy who proves the rule.

The hard part of competition is for me to take all of this too seriously. Fact of the matter is that the competitions have very little impact on our business or our customers - or our reputation for that matter, making the whole pursuit to be somewhat trivial. Add that to the thought nagging in the back of my mind that Thomas Keller and Ferran Adria did not build their reputations through competitions and I can't help but think that my participation is just a bit contrived.

Contrived or not, we push onward and it's been nothing but disaster this week.

In recent conversations, the notion of something along the lines of Wylie Dufresnes' much lauded Fried Mayonnaise came to mind. Could there be a way to actually fry coffee? After tossing around a few ideas, that weird stand-by: the fried ice cream, served as a springboard. Perhaps we could freeze the coffee with the AntiGriddle, batter and then deep fry?

Of course, anyone that's tasted frozen espresso can tell you that the freezing process enhances everything you don't want to enhance in espresso - creating something metallic, bitter and nasty. Not exactly championship material. But what about mixing it with milk? I'm game, so I took a double shot of espresso, mixed it with a 1.5x its' amount of half and half cream, and froze them overnight in silicone molds.

Next was time for the batter: milk, eggs and panko breading with some spices to "kick it up a notch." Heated up some oil to 375 degrees Fahrenheit, dipped the frozen macchiato in the batter and dropped into the hot oil.

That was a mistake.

The thin batter quickly disintegrated, exposing the now rapidly melting macchiato to the hot oil, resulting in an explosive evaporation of the macchiato mix. Good thing that $25 Rival fryer had a lid. All that was left were bits of burnt batter and milk solids.

So much for the fried macchiato.

Since yesterday, I've been working on a French Toast infusion. Today's batch sample proved that we still have a long way to go as the infusion was mostly lost in the espresso.

On another front, I've been thinking about toffee and bacon and decided to combine the two. Whipped up a batch of toffee (sugar, butter and heat), spread it out on a silpat and sprinkled it with cooked bacon. Sounds divine. In fact, some of the spoon samples that solidified after intermittent stirrings throughout the cooking process were very promising. Unfortunately, I took it a bit too "caramel" which resulted in burnt and bitter notes in the toffee. More disaster.

As the day ends here at The Spro, I leave with my head slung low and the taste of bitter, burnt toffee in my throat.

It starts Friday at the Washington D.C. Convention Center.
Posted by onocoffee at 5:43 PM 2 comments: Links to this post