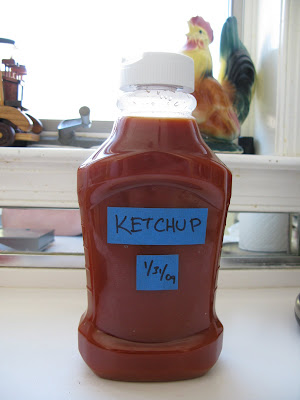 A Bottle Of Ketchup For The Winter.

Even though I hardly ever eat it, the refrigerator was getting suspiciously low on ketchup this past week. Instead of running out to the store to buy another bottle of Heinz, why not make it myself? Why rely on the corn syrupy sweetness of commercial ketchup when I've got some fantastic ingredients around the house ready to go?

Surprisingly, making ketchup is relatively simple. Just some fresh tomatoes, peppers, onion and spices. Toss them all together, simmer for an hour, blend et viola! You've got ketchup.

Being the middle of winter, I'm suspicious of any tomatoes I find at the markets. Luckily, I processed and vac bagged a bunch of tomatoes from Martin's Farm at the end of summer. While they're not the most vibrant color of red, they're big on sweet, delicious flavor. We'll need two pounds of tomatoes.

The recipe I have calls for Anaheim Chiles, but why go out and search for them when I still have those beautiful roasted Hatch Green Chiles I brought back from New Mexico? I'll use those.

Rough chop the tomatoes, chiles and a medium sized onion and toss it all into a sauce pan. Add a crushed garlic clove and a sachet of "Secret Ketchup Spice" and simmer for an hour. Season with salt and pepper to taste.

Once you've simmered the lot for an hour (and softened the onions in the process) transfer everything to a blender and puree until smooth and creamy. On my VitaMix, it takes about three minutes. Think about the consistency of ketchup - that's what you want.

After you've pureed everything together, you can strain it through a mesh strainer. I prefer a thicker ketchup and leave it as-is. Transfer the puree back into the saucepan and simmer again for another hour. This time you're thickening ketchup and evaporating moisture. It will also slightly brown the ketchup but if you want a deeper red then don't be afraid to add some tomato paste to add color and flavor.

When the puree has reached the desired consistency, allow it to cool before storing it in a clean glass jar (or other non-reactive container). I cleaned and saved my old Heinz bottle for posterity. Stored in the fridge, your ketchup should last up to three months. Longer if you can the ketchup. 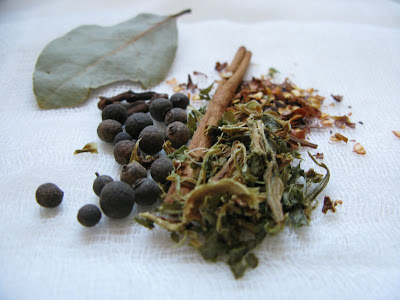