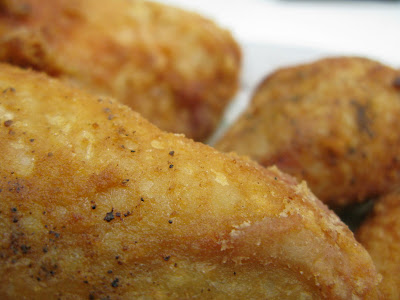 Could this be sous vide?

I'd been hearing rumors about a certain Northern California chef who allegedly has been making fried chicken sous vide. With discreet inquiries with friends meeting dead ends, I decided to find out for myself.

I love fried chicken. It can be so tasty, so sublime, so simple. My preferred way method is to source high quality, local pastured chickens, season with salt and pepper, refrigerate for an hour to dry out the skin, coat in all purpose flour then pan fry until crispy. It's simple and allows the natural delicious flavor of the bird to shine through. 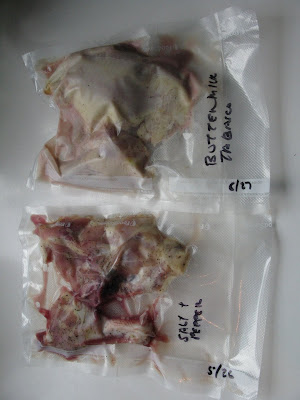 But I've always wondered how to deliver fresh fried chicken en masse. No, I don't want to fry it and hold it in an Alto Shaam or C-Vap for several hours. I wanted to know how I might deliver freshly fried chicken quickly - to order. Initially, I thought that par cooking the chicken might be the answer. This was met by a resounding chorus of "NOs" from just about every chef and cook I know. Bag that.

Or maybe that was the answer... 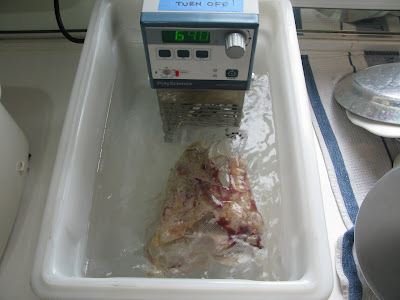 While chatting about this with Philip and Jason from PolyScience, the potential of using the immersion circulator to create my quick service masterpiece came into view. What if we vac bagged the chicken, cooked it sous vide, held it cold and then fried to order? Would the results be worthy? Would they be delicious?

To answer those questions, I sourced a chicken from Springfield Farm and set about butchering the old gal into two legs, two wings, two breast and two thighs, with the back going into the other days' stock. I decided that I would use two basic methods of preparing fried chicken. First, my usual simple concoction of salt and pepper. Second, a more southern approach of buttermilk and Tabasco. I would also separate a control group of each that I would fry traditionally. 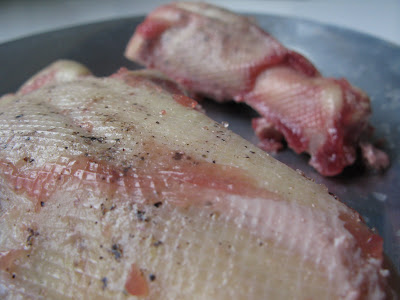 Overnight in the fridge. Hash marks are from vac bag and check out the gelatin.

For reasons that are still not very well understood in my mind, ingredients should be well chilled before being placed in a sous vide waterbath. I don't have enough technical knowledge to understand why but Keller was pretty adamant in his book Under Pressure that I go with the flow, but one of the major reasons is to have consistent results and a common baseline to begin cooking. 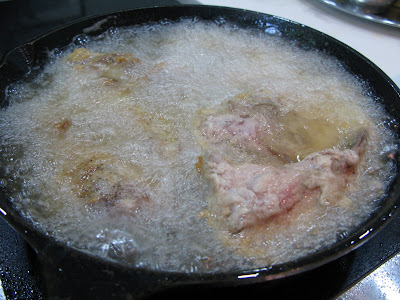 Into the cast iron skillet.

The chicken that would be cooked sous vide were placed in a 64C water bath and cooked for one hour. After the cooking, the chicken was chilled again and held.

To fry the chicken, I first opened the salt and pepper bag. The juices had covered the pieces in a lovely, slimy gelatin. After wiping dry and setting the chicken on a platter, they were placed back in the refrigerator for one hour to dry the skin out slightly to aid in crisping.

With just over an inch of vegetable oil in a cast iron skillet heated to 350F, each of the pieces of chicken were dipped and coated in all purpose flour then placed in the hot oil. In the fryer were a salt and pepper leg and thigh, and a buttermilk breast and win to make differentiating between the two groups easier. 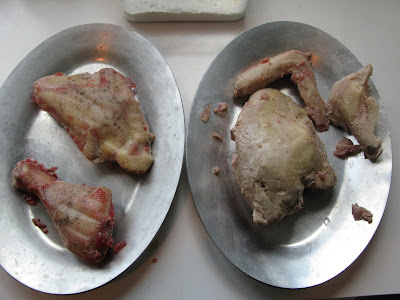 The hot oil roared to life with the chicken and in five minutes, the four pieces of chicken were golden brown and covered in a crispy coating. Time to see how they turned out.

As I cut (or bit) into each piece, the results were as hoped. Crispy coated skin cooked to a proper golden brown and the interior beautifully moist and heated through. Near perfection. Brilliant.

It's been nearly two years since I first started eating chickens from Springfield Farm and, if you recall, my first time, I was a bit put off by the flavor. Maybe I've gotten used to that flavor or maybe I've been eating too much bland commercial Chik-Fil-A or KFC lately, but I was nearly put off by the flavor of this chicken. 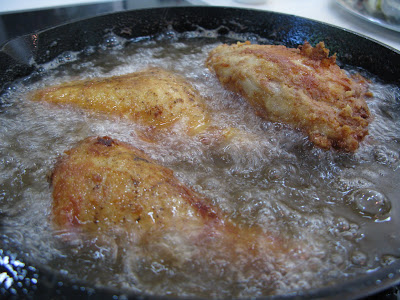 Into the frying pan - five minutes.

It was strong. It was pungent. It was nearly offensive. It was gamey. I nearly gagged. Then I realized that it was concentrated. This was the true flavor of the chicken nearly unadulterated. Perhaps I hadn't used enough seasoning or maybe the sous vide method locked in the flavor so it had nowhere to go except stay. Either way, it was powerful. Deep. Rich. The essence of chicken bashing you in the face and forcing you to look. I couldn't turn away.

Had the vacuum bagging of the meat locked in the flavor so strongly? Do other methods of cooking pull those flavors out of the meat? I could only guess yes and turned to our control group.

The control group was the other half of the chicken prepared and cooked normally. Fifteen minutes in 350F oil for the dark meat and seven minutes for the white meat. The control group had that same wild, gamey flavor but it wasn't as strong and in your face as the sous vide pieces. I'm guessing that some of that flavor is imparted into the cooking oil and pulled out of the chicken, lessening its' impact.

I also discovered that I'm not a big fan of the buttermilk coated fried chicken. It really didn't do anything for it. I'm back to the simple salt and pepper method. 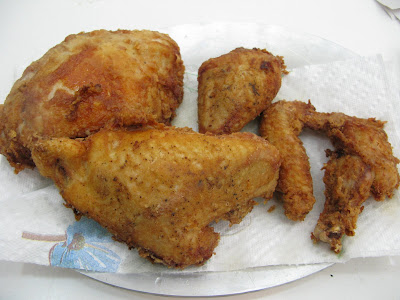 All Your Chicken Are Belong To Us.

But this test was about seeing whether or not sous vide is a viable method for preparing fried chicken. Can the technique be used to cook the chicken through, hold chilled and then fried crispy to order - with no or very little loss in tenderness and moisture? While one test isn't enough to say definitively, I think the answer is yes.

In these tests, as the coated exterior crisped and turned a golden brown, the interior reheated to a proper temperature and seemed perfectly fine, with no indication that we had used any sort of techno-wizardry to create it. In fact, my friends who I served the chicken to had no idea that sous vide was part of the mix.

At least now I know how I can make quite a bit of fried chicken quickly...
Posted by onocoffee at 12:05 PM 6 comments: Links to this post