Beaten Up By The Bay

You may not know this, but I'm actually a sailor. I've done sailing and been a member of a yacht club (or two) since 1995. And while I've spent a bit of time holding the tiller or paddling an outrigger canoe, my experience with power boating has been very limited. Until today. 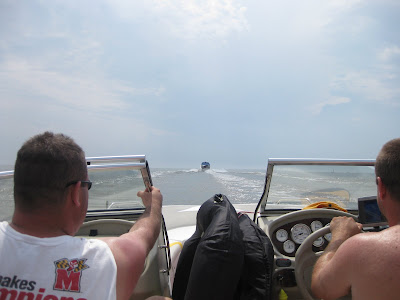 Bill and Bud piloting our way across the Chesapeake Bay.

Bud called me yesterday seeing if I wanted to go out on the boat. Since my girl was away for the weekend, and Bud and Bill were leaving their wives at home, it was going to be a boys outing on the Chesapeake Bay. The weather for the day was brilliant. Warm, sunny, clear skies - just perfect conditions as we launched the boat into the water at Rocky Point.

Bud's boat is a modest boat with seating for up to eight and a six-cylinder engine, it's small enough to tow but still fun enough to throw around. First stop: Hart-Miller Island where young women reputedly like to sunbathe topless.

Following the Back River out towards the Chesapeake Bay, Hart-Miller Island is to starboard (right). I'd heard of this magical place just off Baltimore County's shore but had never been there. As we approached, I wondered just what kind of frolicking we would be party. Sadly, it was barely 11am and only six boats were anchored off the island, meaning that the party hadn't started and that we were too early.

Figuring that the sights would be better in the afternoon, after the revelers had time to drink enough alcohol to lubricate the party machinery, we took off for the protected shelter of Fairlee Creek on Maryland's Eastern Shore, about four miles away.

The interesting thing about taking a boat across the Bay to the Eastern Shore is the relative time savings. For us to drive to Fairlee Creek from Baltimore would take nearly two hours. We could be there in 30 minutes. As we cleared Hart-Miller Island for the open expanse of the Bay, Bud gunned the 200 hp six cylinder engine and brought it roaring to life. Soon, we were skimming along at 40 mph.

Compared to sailing, the speed under power is exhilarating. With the sun beating down on you, the wind on your face and the engine roaring angrily behind you - you feel as though you are rocketing across the water. It's smooth, it's cool, it's delicious - until you hit the chop.

Boom, we're jostled about. Boom, we're airborne. BOOM, suddenly the boats' hull has crashed into the top of a wave and we're slightly rolling and the stern is pitching to the right. One moment we're gliding along happily, the next I'm envisioning the stern popping out hard to starboard and the next wave catching the hull, causing us to flip over mercilessly and the three of us flung from the cabin at high speed with arms and legs flailing about.

CRACK, the hull hits another wave and it feels as though we're on the verge of losing control. I quickly wonder how much abuse this hull can take before it actually cracks and we're swimming for shore - damn, I would hate to lose my iPhone this way. Bill and I are being thrown into the air and nearly out of our chairs. We're being flung like rag dolls and just barely hanging on to a railing, a windscreen or cushion. The force of the blows are so severe that the fire extinguisher and its' mounting are ripped from the bulkhead and tear across the cabin, ready to impale any of us that gets in its' way. 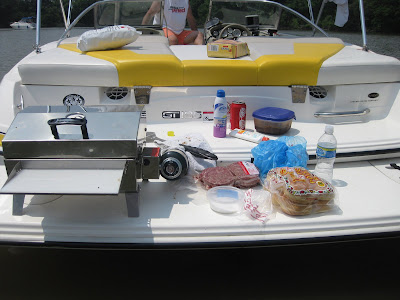 As quickly as it reared its' head, Bud has brought the beast back under control. The forecast is calling for thunderstorms that afternoon and it seems the low pressure has already started to create chop on the Bay. We attempt to seek refuge behind larger vessels crossing the Bay but none are heading in our direction and we must traverse the entire width on our own. It's not bad except for the chop and the wake caused by twin crossing freight barges in the shipping lane.

The calm, protected waters of Fairlee Creek are a welcome respite to the pounding we received by crossing the Chesapeake Bay. The sun is bright and feels good on the body. The weather is reminiscent of my days in Honolulu and I'm longing for another chance at life in paradise. In the meantime, Fairlee Creek will have to suffice.

Surprisingly, the waters are cool for May. Were we to dip into the Atlantic waters in Ocean City, we surely would have been greeted by hypothermia. Here, the waters are warm and refreshing. Fresh water swimming always kind of freaks me out. Who knows what kind of odd fish or snake (water moccasin) is lurking beneath the murky waters or lying in wait on the muddy bed. In spite of my misgivings, I take a short swim and am reminded of my distaste for open water swimming.

In spite of the fact that I'm open to sailing, boating, outrigger canoeing and overseas air travel, I really have come to detest open water swimming with its' seemingly bottomless floor and no walls to grab onto - it's positively unnerving. And I never remember this little fact until it's too late. Like the last time we took the catamaran offshore off Waikiki. One mile out and in the best interest of trying to impress the ladies, we're the first to leap off the boat and into the deep ocean blue waters.

Mind you, I'm freaked by snakes in fresh water but sharks and other man-eating creatures in the open ocean don't necessarily bother me.

It's not until I'm soaring through the air do I realize that I really hate open water swimming. Once in, it's a continual treading for survival. Up and down you go as the swells roll by you. Up onto the crest of the wave, then back down into the trough. Add the strong current pulling you away from the vessel and it's a constant struggle to stay alive. I think it's better to be topside drinking Mai Tais. At least the salt water of the ocean increases buoyancy, reducing your effort preventing drowning.

Anyway, back to Fairlee Creek...

After a few minutes, we've got the propane grill set up on the transom and I'm cooking from the water. It's oddly unique and much more convenient and comfortable than having set the grill on the sun deck and having to bend down took cook. This way, I've got my mise en place in place and we're ready to start grilling. 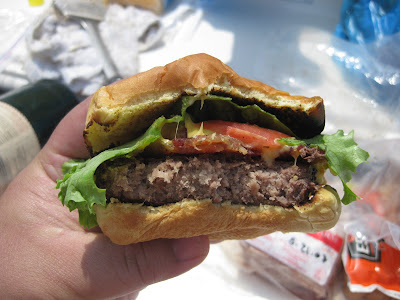 Perhaps there's nothing more masculine than grilling. It's just so simple, so guttural, so "man." It doesn't require specialized techniques or tools. Just an open flame and meat. How fitting that we're just three guys standing in a calm harbor grilling meat and waiting for chicks.

Bill has prepared some chicken breasts in BBQ sauce and I've got a simple prep of sliced and seasoned rib eye and hamburgers from Springfield Farm. We get the chicken and steak rolling first and it's a good start. They can't believe I've only used salt and pepper to season the steak and are surprised by the flavor. Bill swears that I've added butter, but I haven't. I promise.

To go along with the burgers, I've brought some Martin's Potato Buns, Springfield Farms bacon, fresh tomato and lettuce. A burger wouldn't be complete without cheese and while many might expect me to bring along some fancy cheese - to me, there's nothing better on a real, bonafide, American hamburger than bright yellow, heavily processed American Cheese. I just love that odd gooeyness.

After our food, some good conversation and more than one cigar, the storm front they were forecasting is starting to roll in and we're still miles from home. It's time to go.

As we make our way out of Fairlee Creek and into the Bay, dark clouds and storm fronts surround us on three sides - one of which is dead ahead. The barometer is plummeting, a Coast Guard patrol is to our starboard and the National Weather Service is getting ready to issue a Small Craft Advisory (that means us). Luckily, we secure a berth behind a large cabin cruiser making it's way at high speed across the Bay. Riding in the wake of the cruiser means that our ride back home is pretty smooth all the way across.

With foul weather and a small craft advisory on the horizon, we remain true to form and make a stop again at Hart-Miller Island to see if the action has increased since the morning. It most certainly has and while we don't spot topless sights, we do find lots of revelry going on. We hang out for a little while until the rain starts and it's time to get ashore.

Half an hour later, the rain is coming down, the boat is secure on the trailer and we're riding home after a long day on the water. 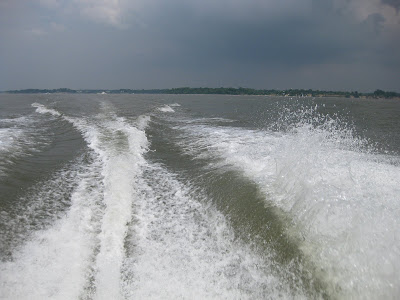 Hightailing back to the Western Shore from storm front rising.
Posted by onocoffee at 3:52 PM No comments: Links to this post