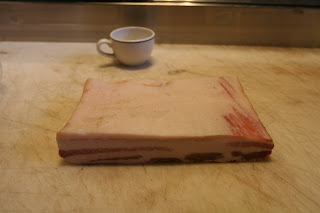 It's finally happened. After years of participation and relative enthusiasm, the desire to compete in the United States Barista Championship has reached an all-time low. I hate to say it, but my enthusiasm as a competitor is practically nil.

I was on the phone with Eileen from Ritual Coffee in San Francisco the other day when it really became clear to me. Winning a competition just isn't that important to me. Sure, the egotistical side would love to dominate, but the soul side of me knows that the competitions mean very little - I'm interested in the customer and how we perform on the front line on a day to day basis. That's were it matters and that's where I want our reputation to be built.

People like Keller and Ripert didn't build their reputations on winning competitions, they built them through the experiences of their customers, and it's that approach that appeals to me most.

That said, I thought I would share some of our latest forays in our journey of finding some ground between coffee and cuisine. As with any journey, sometimes you win, sometimes you lose. Lately, we've been experiencing a lot of the latter, but it's all been in good fun, which makes it worthwhile. 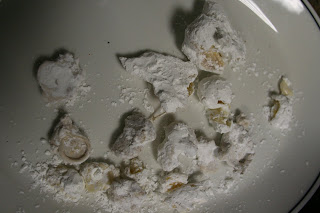 First up, after receiving great feedback from the judges at the Mid-Atlantic Barista Competition and selling out at Woodberry Kitchen to rave customer reviews, I've been re-thinking "Breakfast In Bed" and wanted to see if we could encapsulate the french toast infusion. Isaiah suggested a corn starch based technique he had been reading about.

Essentially, you take lots of corn starch, bake it dry, poke holes in the starch and pour your liquid into the holes and bake again. The corn starch reacts with the liquid and encapsulates it. We tried it with some maple syrup and the infusion and baked it overnight.

Which was several hours too long it seems. The next morning, we ended up with these crystallized pieces that were just plain disaster. Although a couple of them formed a spherical shape and had some moisture within, leading us to conclude that it might be possible with a shorter bake time - and larger holes in the corn starch. If you remember the first image, we've also been pondering bacon. How to deliver a better bacon flavor without being too obvious. Of course, this paper-thin, nearly translucent slice of bacon is rather obvious but I'm in love with the idea of creating a paper-thin strip of bacon that's stiff enough to stand on end but delicate enough that it breaks up in the mouth. Even better yet would be a method of it breaking and dispersing across the palate once placed in the mouth. Kinda like what foams do but without the foamy texture.

This one worked out decently enough and we ran one night of the "Breakfast in Bed" special at Woodberry with a light toffee glaze on the bacon and it propped up in a toffee-topped chantilly. 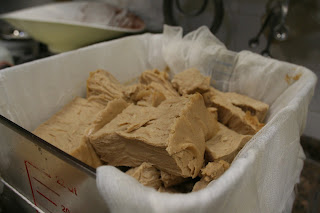 It looks quite nasty and feels weird too.

The idea of a consomme has always appealed to me. Especially consommes of things that should never be made into consomme. This is gelatinous residue from an attempt at a donut consomme. It just didn't work out. The finished liquid was a golden umber and crystal clear but the bread-y-ness of the donut was missing and dominated by sugar. Somewhere in the background was a faint taste of the donut. Just simply not strong or compelling enough.

I'm thinking the key is in the donut and we're just going to have to experiment with different donut recipes as well as different sources for donuts. 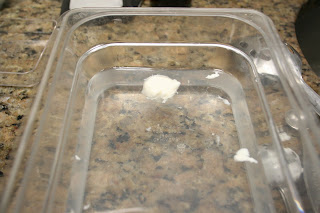 Continuing on our journey of encapsulating the french toast infusion, we turned to the obvious contender: sodium alginate and calcium chloride. We portioned it out and created the proper bath but the dairy in the infusion seemed to have a gelling reaction to the sodium alginate. We countered by lowering the concentration of the alginate to .03% and we still were not able to achieve the desired results. It resembled a french toast gnocchi rather than the desired spherification.

More testing will need to be done before we achieve the desired result.

Oh well, at least I had a nice lunch at Central Michel Richard yesterday.
Posted by onocoffee at 11:39 PM No comments: Links to this post