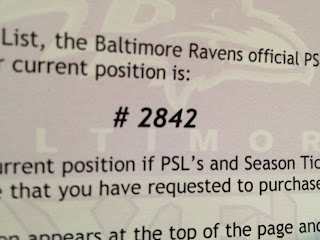 Somewhere along the line, I seem to have gone off and into the End Zone.

Years ago, I couldn't stand football, or "football" as we called it (don't ask). Then, around 2004, I secured season tickets and started going to the games. Back then, the Ravens just didn't fare too well and by 2006, I was so inundated with work I ended up only attending two games that year. Not good.

But for whatever reason, I've gotten back into Ravens Football again and decided that I should buy myself a PSL (personal seat license) for the right to buy season tickets. Even today (as in 1996 when it started), I still find it foolish for people to pay cold money for the "right" to buy tickets. It's really just absurd. But seeing that Fan is short for "fanatic" it makes sense. You have to be fanatical to spend that much money.

Prices for PSLs today have skyrocketed into the stratosphere. People are asking for twenty grand for centerfield seats. That's crazy.

With a fan base as crazy as the Ravens enjoy, PSLs have been sold out for years, but you can get a new one (or one that someone else has given up) by joining The Wait List.

The Wait List is a limited list of 3,000 people who pay fifty bucks to join, plus twenty-five dollars per year to maintain their position on The List. By the way, that price is per seat. So for a four seat position, one pays $200 upfront and $100 each year to maintain position. Of course, all the money you paid to the Ravens will be applied to your eventual purchase of the PSLs.

Signing the paperwork reminded me of a buddy in Northern Virginia. An American chap with a lifelong love for cricket. An avid player, he petitioned to join in his twenties and won his entry into the club almost ten years ago. He was on their wait list for thirty years.

Talking to my Ravens representative, who tried to steer me towards the PSL Marketplace to quickly (and expensively) purchase a PSL, told me that my wait time on the list would probably be fifteen years.

Guess that's better than thirty...
Posted by onocoffee at 5:41 AM No comments: Links to this post