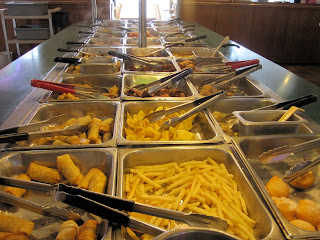 The Steam Table - right about now, those french fries are tempting me.

My nieces are back in town and since they're birthdays are so close to each other I told them I would take them out to lunch - wherever they wanted to go. Woodberry's brunch would be nice, but anything that appeals to 10 and 12 year old girls works for me as well. Applebees, Cheesecake, Five Guys, CPK - wherever, even if I wouldn't choose eating their myself.

One wants to go to IHOP, the other doesn't. They're not sure at first then settle on IHOP. We'll go after the 12:15pm mass. 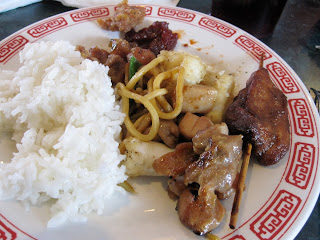 Why I'm not a fan of buffet anything.

While they're at mass, I'm finishing some work on the computer (yes, I'm "The Bad Catholic") until my aunt calls (they took the girls to mass) to let me know they're finished and that they've now decided to go to the local Chinese buffet.

Something smells fishy to me, so I query my aunt: "Do they really want to go there or did you coerce them into the buffet?" 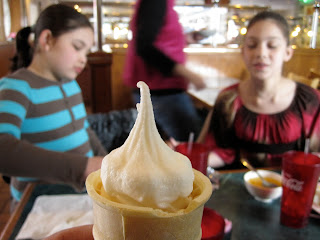 My perfect way of enjoying a "cone" of soft serve ice cream.

I always wonder about our fascination with buffets. They're usually not very well executed and most of the items are uninspired or downright sad. Hard, dried bits of char siu. Dried and shriveled dim sum. Sodium filled wonton soup with specks of pork in the wontons. But people still flock to them. 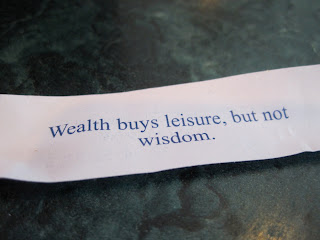 But it's their birthdays and I'm not here to bitch and moan. As long as they're enjoying themselves and having fun - that's all that matters. I can eat something tasty to my palate any day.
Posted by onocoffee at 3:38 PM No comments: Links to this post