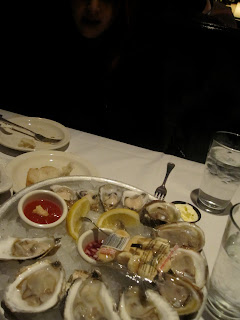 A plate full of oysters.

It's been a long time, but last night after a visit to the Thursday Night Throwdown - that monthly gathering where baristas drink and hold latte art competitions, we hit the Old Ebbitt Grill.

For the uninitiated, a latte art competition is simply that - pull a shot of espresso, steam some milk and pour the milk to create nifty little designs in the cup using the contrast between the espresso crema and the milk foam as your medium. This was my first ever Thursday Night Throwdown and I never made it to my pour.

Unlike the other latte art throwdowns I've experienced both as a barista and judge, this one has the barista make the art then submit it to a panel of judges for scoring instead of the head-to-head, sudden death style of the others I've participated. Sadly, this scoring format takes longer to administer and doesn't generate the excitement or hold the interest of the sudden death style where each new latte art is pitted against the current winner creating tension and the agony of defeat with each successive pour. After nearly two hours waiting, we decided that it was time to head out and do something else.

That something else was the Old Ebbitt Grill and their half-price oysters after 11pm.

It's the not-so-secret hidden gem of DC's restaurant scene. The Old Ebbitt sources oysters from around the nation and at 11pm each night, that twenty-two dollar plate of oysters drops magically to eleven dollars per dozen.

Time to run to the Old Ebbitt again...
Posted by onocoffee at 11:59 PM No comments: Links to this post