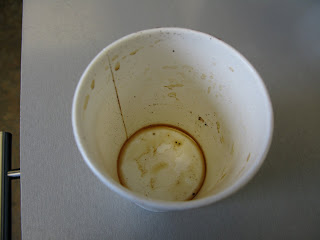 The soiled paper cup that almost was.

In my position as barista and owner of Spro Coffee, I typically find myself in a difficult position when serving customers. I know the costs of our items and I know the company's current profitability situation, I've also set the standards that me and my baristas work to maintain day in and day out. But it's that knowledge of our costs that threatens to foil my standards. And it's a constant battle.

Take the paper cup above, for example. Paper cups aren't cheap. They cost us five cents each. Admittedly, it's not that much, but it is five cents. Styrofoam is half that while plastic is twice that price. And don't mention corn-based, biodegradable "green" cups - they cost even more.

Okay, it's not a lot. But I hate to throw them away because it's wasteful.

The other day, a customer comes in wanting a small coffee, so I grab the 8 ounce cup, fill it to the brim, bring it over and he tells me that he wanted the "other small" meaning the twelve ounce cup. Since we're about accommodation, I pour the contents of the cup into a 12 ounce cup, fill it the rest of the way and the customer is happy.

I can't throw the cup away.

So, it sits there. Waiting. For maybe three minutes until another customer comes up wanting an 8z latte.

Now, what to do? What to do? I've got an 8z cup ready to go. Sure, it's slightly soiled with drips of pressed coffee, but I wouldn't say it's "dirty." It cost five cents. If I toss it, that's five cents down the drain. I want to use it. I must use it. This customer will never know the difference. The customer can't see the cup sitting behind the espresso machine. By the time the customer gets the cup it will be filled with delicious latte and topped with beautiful art. The remnants of that pressed coffee will have been swept away by my coffee-making genius (and smart business frugality).

But my standards don't allow for this.

The problem is: if I do this and re-use this soiled cup because I don't respect the customer enough to think that he/she will know the difference then I've flushed all that we've been fighting for down the toilet and we're nothing more than just another crappy independent coffee shop deluding themselves that we're doing something special and worthy.

What a conundrum over a five cent cup.

In a hasty moment, I did what I should have done all along, I tossed the cup into the bin and grabbed a fresh one. I didn't want to do it, but I knew I had to do it if I was to lead my team legitimately. We can't pursue our standards willy-nilly and at the leisure of the nob running the shop. If my standards were going to be enforced, I would have to lead by them.

The customer received the latte and was happy for it. She said it was delicious. She never knew how close she came to being served her latte in a cup soiled with pressed coffee. And it wasn't until later that I realized how close I came to tossing it all down the drain. 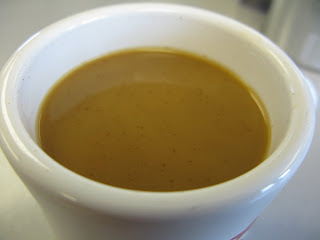 A cup of Los Mujeres de Guayata from Colombia.

In the world of Third Wave Specialty Coffee, there's a stigma about cream and sugar. Real Third Wavers only drink their coffee black because that's what it's about. You're supposed to appreciate the nuances of the coffee and anyone who doesn't is some heretic to poo-poo on. Charlatans not worthy of consideration. And God forbid if you own a blender.

As for me, I like a little bit of cream and a little bit of sugar with my casual coffee. Sure, I drink coffee black to taste the nuances and when I'm critically tasting coffee. But when it comes time to kick back with a donut or ice cream or some kind of pastry and the coffee drinking is about enjoyment rather than business, it's milk and cream all the way baby - but not too much. Just a 1/4 teaspoon of sugar and a color of cream. Both help to punch up the inherent flavors of the coffee as salt on meat does.

Maybe this weekend I can drink a vacpot of Esmeralda with a plate of Chilaquiles... 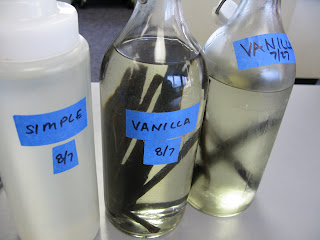 In the recent issue of Barista Magazine, one of the writers has penned an article about signature drinks, encouraging baristas to develop their own. This is a good thing. But what I'm confounded by is how the author leans on the reader to buy manufactured syrups instead of making their own. It seems to be antithetical to what we do.

Don't get me wrong, my company has done syrup manufacturing in the past. I understand that it's a matter of economics. That coffee syrup companies have a lot of money to support the community. They buy ads, sponsor events and do all sorts of great things to help the barista community. I get it. It's cool by me.

But if we're talking about the "upper strata" of baristas and coffee shops who boast about artisanal coffees and hand crafted coffee beverages, then aren't manufactured syrups a bit out of place? Especially when it's so easy to make your own.

Maybe because it's because of my past as a syrup manufacturer, but making your own syrups is easy peazy - just take some water and some sugar and you're on your way!

At The Spro, we make all of our syrups by hand. Chocolate, vanilla and simple syrups are at hand daily. But when it comes to esoteric flavors like black cherry, blackberry or french toast, we make those in-house too, and from real, natural fruits and ingredients, not artificial flavors like I used to as a syrup manufacturer.

Making a base (or "simple") syrup is easy. Just take a vessel, fill halfway with sugar (your choice) and the other half with hot water, stir and dissolve. Simple. Quick. Easy. Done.

Some people state that you have to boil your water. Not so. Sugar will hydrate naturally in water. This means that once you've wet the sugar completely, it will dissolve in water - even if the water is cold. Heating the water just quickens the time it takes to dissolve. At The Spro, we use hot water from the water tower, stir the sugar until it dissolves and we're done.

Want to make fruit flavors? Take some fruit, mash it, toss into a pot, heat, add some sugar, bring to a boil, stir, reduce by half, strain and use that flavored liquid as your flavoring base to add to your simple syrup. Done.

So please, if you're an "artisanal" barista, for God's Sake, make your own syrups.
Posted by onocoffee at 12:04 AM 3 comments: Links to this post