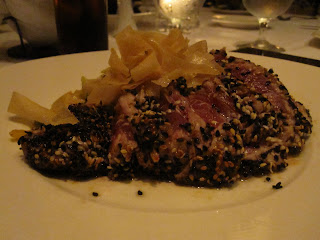 The problem with short trips is that you feel like you're trying to cram too much into too little time. Thank goodness Ethel and Matt were willing to come up to Napa to hang for a couple of hours. They asked where I wanted to eat and since I only know The French Laundry, I left it up to them to select a nice place that's kid friendly.

So after homework and baseball practice, they trucked up from Marin for a little respite at Hurley's. Thanks guys! 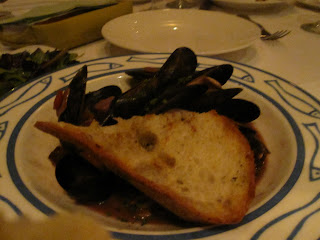 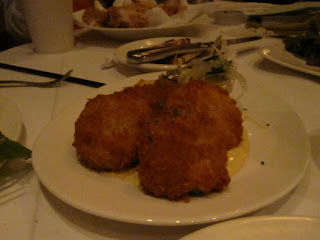 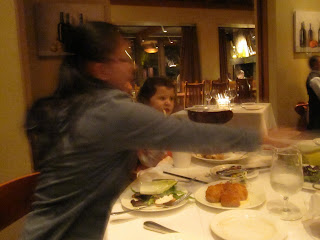 Ethel and Hilve.
Posted by onocoffee at 10:33 PM No comments: 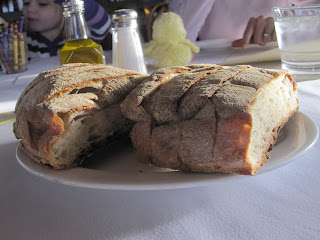 Bread for olive oil and balsamic. 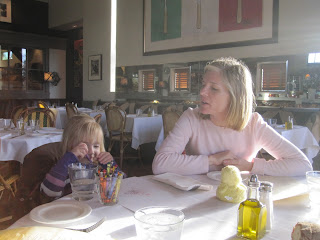 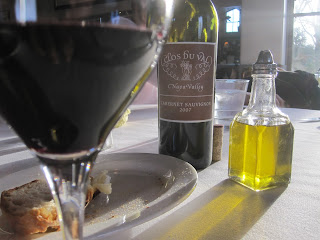 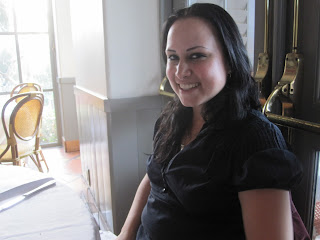 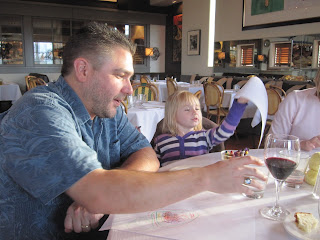 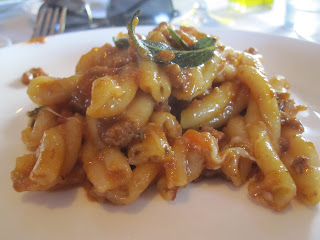 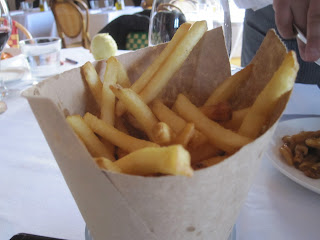 Some fries.
Posted by onocoffee at 6:31 PM No comments: 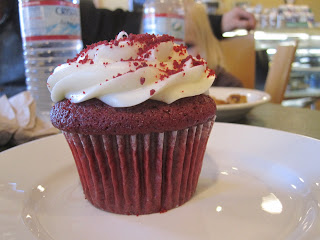 Aaron called to tell us that they were at Model Bakery in St. Helena. I knew nothing about Model so when we arrived, Aaron and Michelle "encouraged" us to try the english muffins - labeled "the best" muffins in the world.

Honestly, I'm a Thomas' English Muffins kind of guy. Give me that fork split goodness, burn it in a heavy toast, slather it with butter and I'm very happy. I've tried other "english muffins" at different restaurants and they never got the right texture or the "nooks and crannies". 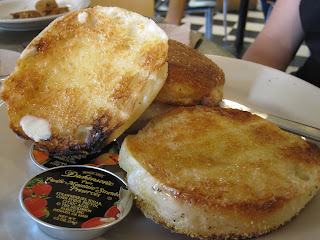 There are no nooks or crannies in a Model English Muffin but these are some seriously good muffins when given a hard toast, slathered with butter and then a layer of jam. Amazing. From what I've been told, part of the key to these muffins is that they are cooked on a griddle to give it the proper crust.

However they are made, I like them and am even happier that I can buy them online.
Posted by onocoffee at 3:29 PM No comments: 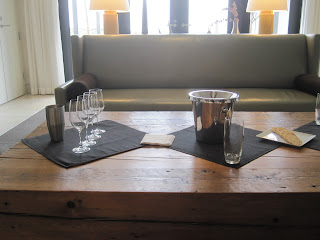 The tasting room at Paul Hobbs.

Before jetting out to California, I was caught up in a bit of a conundrum (not Caymus, they're pretentious and arrogant) - what wineries to visit in the Napa Valley?

I first started visiting Napa back in 1988 when the valley wasn't encroached by the development and tourism it is today. Back then, a trip to Robert Mondavi was still a small and relatively casual affair. Go there today and it's massive group tours and commercialism. Whatever the case, I knew relatively nothing about wines then and, to be honest, my understanding of wines really has not improved some twenty years later. 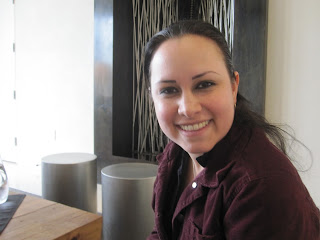 Ana ready for a tasting.

Lately, I've been drinking more French wines. Specifically Cotes du Rhone and Chateauneuf du Pape, and maybe a smattering of California zinfandels, but the Napa Valley? I really was coming up short. Two years ago, we went back to visit Caymus (where they were as pretentious and arrogant as possible), Raymond (fun) and Silver Oak (impressive building).

This time I thought about a few others, like Pezzi King (Healdsburg? Too far!), Vineyard 7&8 (no available tastings) and Orrin Swift (I like their Saldo), but still the question of "where?" reigned. 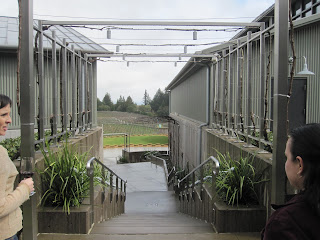 Emily leading us down to the processing buildings.

That's when James and Austin of Swirl Wine in Timonium suggested Paul Hobbs. Hmmm, sounded like a good idea and set up an appointment.

The terrible irony is that I first decided against visiting Pezzi King, even though I am a fan of their 2005 Old Vine Zinfandel, because they are in Healdsburg in Sonoma County - an hour or so drive from Napa. I wanted to keep the tastings along the 29 in the Napa Valley.

Of course, I didn't bother to check that Paul Hobbs is located in Sebastopol, about fifteen minutes south of Healdsburg, and an hour and ten minutes from our next appointment at Orrin Swift. Without realizing it, I had set myself up for failure. 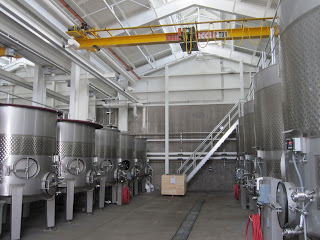 Tastings at Paul Hobbs are by appointment only and it's not easy to find along the highway. There's a simple boulder, surrounded by trees, with the address affixed to it. No large signs to alert you of the magic happening to your right. Once located, you pull in and it's fourteen acres of rolling vineyard and a stunningly modern house with sculpted and manicured lawns.

Emily was there to greet us and as it turns out, we were the only two tasting that afternoon. For those of us used to the mass tours of Mondavi, or the open tasting rooms of Chateauneuf, the quiet of a private tasting is both inspiring and slightly off-putting. 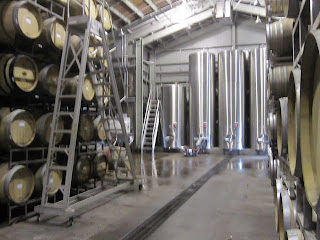 Admittedly, I knew little about Paul Hobbs, the man. After starting off education in medicine, he discovered a love for wine and switched to the oenology program at UC Davis where he wrote his thesis on wine barrels and was wooed by Robert Mondavi himself to help start up Opus One. Not a bad way to begin a career.

From there his genius gives way to slight insanity. The man is obsessed with the details of winemaking. While other winemakers are content to buy fruit from farmers, Paul Hobbs dictates which row(s) of the vineyard that farmer will cultivate for his purchase. Sun, soil and more all play a significant role in his decisions and Paul is involved in every step of the process.

The psychosis in cultivating just the right crop is crazy inspiring and I secretly wondered just how we might be able to export that kind of thinking to coffee production. While we currently laud an entire farm's production, could those high altitude hills in Central America and Ethiopia yield more incredible results with careful selection and cultivation? If only I possessed this guys' expertise in agriculture. 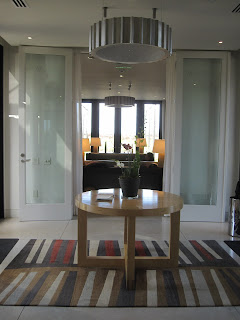 We tasted and then we toured. The facility is most impressive. Everything modern, everything done to a "T". Grape vines from Paul Hobbs home of upstate New York are trellised along the walkway in homage to his past, the catwalk above the stainless fermentation tanks can be removed and the facility is absolutely spotless. So spotless that I was compelled to ask Emily how it is possible that they get their staff to maintain such a rigorous regiment.

As we toured the barrel aging room, I noticed a variety of barrels from different cooperages and asked. I'm guessing that it's rooted in his thesis on wine barrels but Paul Hobbs utilizes different barrels from different cooperages to achieve a particular effect. Turns out that French Oak, Medium toast barrels vary from cooper to cooper and that they can be combined to develop specific recipes. Impressive. 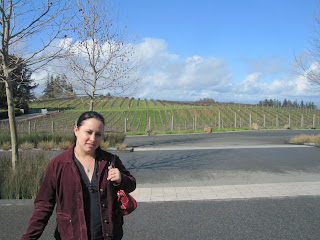 As our time at the winery winded down, the light rain started to abate and even after drinking nearly a bottle of wine, I still didn't feel light headed or unprepared for the open road.

So, with two bottles in tow, we set back to the Napa Valley excited by the wines and a bit saddened that we would not be able to make our appointment with EJ at Orrin Swift. Sorry EJ. Next time, I promise.
Posted by onocoffee at 2:43 PM No comments: 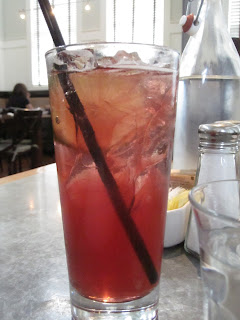 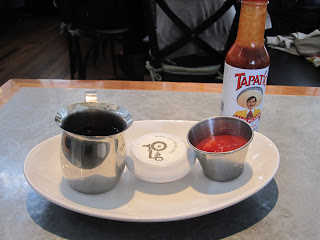 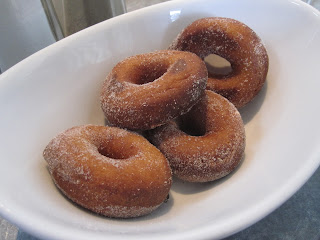 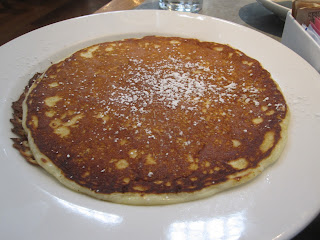 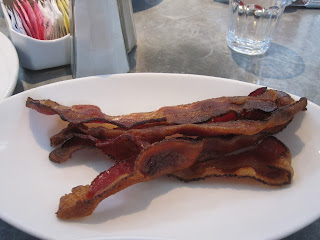 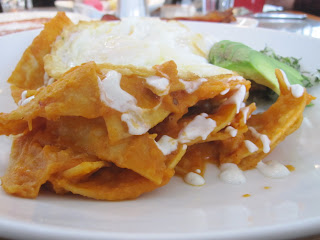 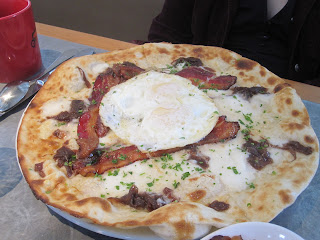