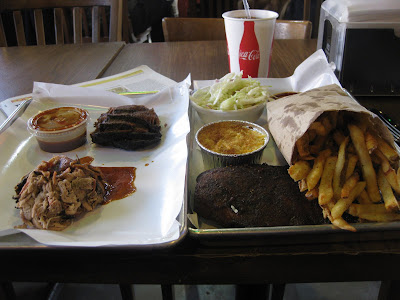 A nice layout and presentation at Smoque.

Two years ago, when I was last in Chicago, I had heard much hoopla about a barbecue joint called Smoque. So much so that I went out of my way to visit - on the one day of the week they were closed (Mondays). Disappointed, I flew home without having so much as a taste.

Fast forward to present day and after I had secured my trusty Chevy HHT from Alamo, I was on my way once again to visit Smoque. One would think that traffic should be smooth at 1:30pm but no, traffic along the highway into the city was hellish. Backup upon backup. Not fun.

Once inside, Smoque is a nice little place that serves their barbecue on those silver mini baking trays. It's a nice touch and they actually lay out the bbq pretty nicely. Since it was my first time, I had to order a sampling of their wares. A few careful questions of the cashier led me to order a 1/2 rack of their St. Louis ribs with cole slaw, mac n cheese and french fries. Smoque has a great idea by offering "tastes" of their meats for three dollars each. Add on a "taste" of both the brisket and pulled pork with that and I've got a representative sample of their offerings. 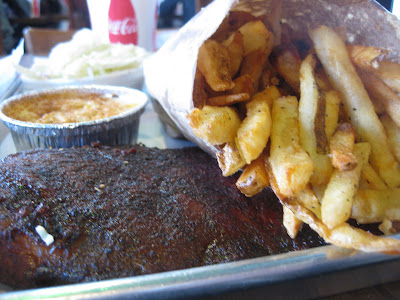 Smoque is highly touted here in Chicago but I'm sad to report that it wasn't superb. Both the pulled pork and brisket were overcooked. The pulled pork was mushy and mealy and lacked distinct flavor, and the brisket was dry. Whether this issue was due to merely being overcooked in the smoker or held too long, I can't say. It just wasn't a great example of either.

The ribs were decent. Nice flavor, a little bit of spice and a good amount of bite to the meat. However, I have to say that it was slightly on the not quite finished side of cooking. What do I mean by this? Many people think that ribs should be falling off the bone, not true. We want to see a nice bite to the meat that requires some amount of effort to pull away from the bone. These ribs required a bit more than some amount of effort.

On the plus side, the french fries were perfectly done. Crisp on the outside, fluffy and tender on the inside. The Mac and Cheese was decent enough but lacked seasoning to make the flavor really shine. The interesting side was the cole slaw. Typical, as far as the shredded cabbage and sliced red onions go, but it's the dressing that really makes it. Light, citrus, acidic - just delightfully surprising without the heaviness that mayonnaise brings to cole slaw. It was the highlight of the meal. 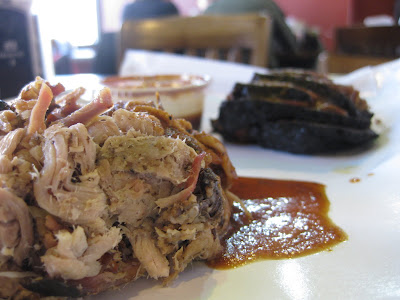 The space is nicely decorated and you share table space with other diners. Drinks are a simple affair: just one size cup and drink all you want. Coke, Diet Coke and the usual Coke offerings plus a non-stop dispenser of sweet tea and unsweetened tea. I couldn't help myself.