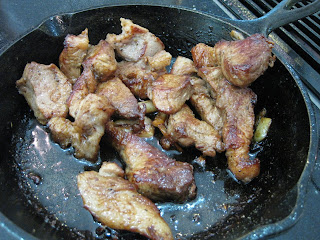 Part Two of our Adobo Tests was slightly simpler in some ways and a little more complex in others. More complex if you don't have a vacuum sealer. that is.

But it's the vacuum sealer that makes this approach simpler too.

First, take some pork butt (or pork shoulder picnic) and cut into one inch cubes. Now, a ten pound shoulder is going to give you a lot of meat, take the majority of the meat and vacuum pack in one pound portions to freeze for other uses later, like more adobo, sausage or carnitas. The pork shoulder typically will have ribbons of fat. I like these and prefer to keep them for extra flavor. For this test, I'll use about a pound and a half of cut pork.

In a stainless bowl, place the pork and an equal amount of soy sauce to marinate. I used 1/4 cup each of Kikkoman Red Soy Sauce and Quezon's Organic Hot Coconut Vinegar. The Quezon Coconut Vinegar is actually kinda hard to source - even my local Filipino market no longer carries it (a shame), but the flavor is so much better than regular. Though, in a pinch, the Datu Puti or Heinz brand vinegars will do.

Actually, I would go with the Datu Puti Sukaang Maasim - that's hot vinegar. If you can't find it, take white vinegar and infuse it with sliced white onions and small, hot chili peppers. It's quite yum and great for dipping chicharron. In Hawaii, it's also called "Chili Pepah Watah."

Toss a few bay leaves, crushed black pepper and crushed garlic and mix it all up. Once the meat has been fully coated, drop it all into a vacuum bag and vac seal. The vacuum will help the marinade penetrate the meat quickly.

After twenty minutes, the meat should be ready to go. Heat a cast iron skillet until it's smoking hot, add some sesame seed oil and saute the meat, making sure you get a nice carmelization on the meat.

Once cooked, set the meat aside and deglaze the skillet with sherry, stock or white/red wine (I used sherry). After deglazing, pour the pan sauce over the meat and serve.

The results were pretty good. The seasoning had penetrated the meat and we had some relatively traditional pork adobo in just a few minutes, without all the braising.

I've still got some left in the vac bag that I resealed and will have to try it again in a couple of days to see how things may have changed.
Posted by onocoffee at 9:08 PM 1 comment: Links to this post 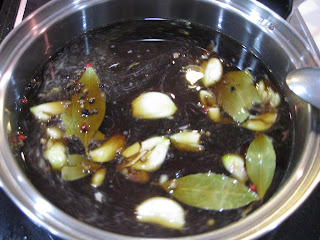 Heating the brine base.

Unlike some of my friends, growing up Filipino in America meant eating a lot of Filipino food. And not always because I liked it or wanted it. Like any boy spending his childhood in the 70s, I just wanted to be "normal."

Take the time my family and I went down to Florida for a vacation. Into the station wagon my brother and I went for the thousand mile trek down the newly constructed Interstate 95. The Interstate was so new back then that there were segments that weren't completed yet.

As any young kid would dream of on a road trip, there was one place we wanted to eat: McDonald's.

That's when I was forever scarred by memories of my mom's "Adobo Sandwich." It would be our substitute for "two all beef patties, special sauce, lettuce, cheese on a sesame seed bun." Imagine pieces of pork adobo between two slices of white bread. White bread that would inevitably turn soggy. Only thirty years later are those considered fond memories of youth.

For months I've been thinking about ways to capture those traditional flavors in modern interpretations of Filipino Cookery. Preparations that might be easier, less time consuming and quick to cook. Today, I had some time and decided to give it a go. First up: Chicken Adobo.

Adobo should be considered the National Dish of the Philippines. Everyone eats it. Everyone loves it. But it cannot be defined. Family feuds have been fought over it. The recipe can vary from one neighborhood to the next. One person likes it saucy, the other likes is fried. Some add chiles, others do not. Some even make it with vegetables.

For our tests, we're going to use the basic trinity of adobo: soy sauce, vinegar and garlic. Add in some black peppercorns and bay leaf and you've good to go. The typical recipe for adobo has you braise the meat in the soy/vinegar mix, but I want things to cook a bit faster for quick preparation and eating. 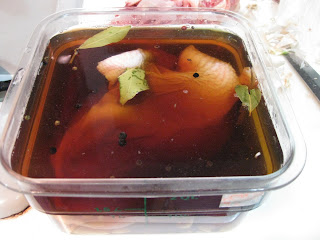 First off, debone a chicken breast (or two). Set the meat aside and reserve the bones for stock making later.

Next, make a 4% brine solution using sea salt as the brining base and 2% soy sauce. Add a bunch of whole black peppercorns, a few bay leaves and how ever many crushed garlic cloves you feel comfortable using. I'm not afraid of garlic.

The traditional approach to adobo also uses vinegar but I don't want to take the chance cooking the meat with enzymes, which could render the meat tough, so I leave it out for now.

Once chilled, place chicken in brine solution, cover and refrigerate for twelve hours.

After twelve hours, remove chicken from brine, pat dry with paper towels and remove any bits of brine seasoning. If you want crisp skin, place the chicken uncovered in the refrigerator, skin side up, for at least one hour to help dry out the skin.

Heat a cast iron skillet on the stove until it starts to smoke.

Add a bit of canola oil to the skillet and allow to heat and shimmer.

Lay the chicken, skin side down in the skillet. Be sure to lay the chicken away from you to prevent splashing. The chicken should sizzle nicely.

Once the skin has browned, turn the chicken over and place in the oven for eight minutes.

After eight minutes, the chicken should be cooked all the way through while still remaining moist. Remove chicken from skillet and set aside.

Deglaze skillet with a 1/4 cup of vinegar and some sherry.

Monter a beurre to create a pan sauce and drizzle sauce over the chicken. 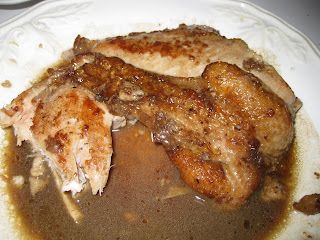 To get the balance of soy and vinegar, it's important to deglaze the pan with the vinegar. Most people use white vinegar but I prefer Quezon's Organic Hot Vinegar. It's infused with hot peppers and will give the dish a subtle kick.

For soy, I used Kikkoman Red. While I prefer Aloha Shoyu for table use, I like Kikkoman's strength when cooking. It really penetrates food well.

I think it's important to use locally-sourced, farm raised poultry for the dish. Important because we're trying to capture the flavor of the motherland - and in the Philippines, they're eating chickens from the farm, not from some industrial agriculture business like Perdue.

The presentation here is very different than traditional adobo. It's also a very different cooking method, but one that I think is faster while still capturing the essence of the flavor. I asked my aunt Josie to give it a try and she liked it but thought that it was still different while having the right flavor elements. I'll have to experiment a little more with ratios to find one that I like best.
Posted by onocoffee at 9:04 PM No comments: Links to this post