Moon Over My Short Ribs 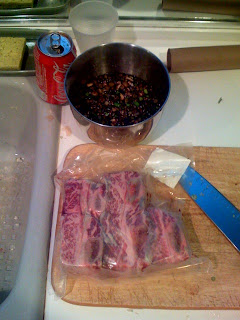 The grass-fed short ribs soaking it all in.

An Homage To Sang Moon

Sang was an old friend from high school years who came out to make it big in finance in Honolulu back in 1992. After hanging out for six months, applying to Bank of Hawaii, First Hawaiian Bank and some other places, he decided to go back to Baltimore and take care of the family business. By the time I moved back to Baltimore in 1996, he was well on his way to being the Dry Cleaning King of Mount Washington.

While shopping at Springfield Farm last weekend, I spied a somewhat unusual cut of beef short ribs. Instead of the usual American cut that uses the entire rib, and unlike the Korean cut that cuts thin slices across the ribs, this one was cubed and well-marbled. So much so that it looked too tempting to pass by. And I can be a weak man...

Tonight was the night and I decided to pay my respects to my old friend Sang by using the kalbi marinade recipe he shared with me many years ago. It's really quite simple and reminds me of simple times with friends grilling short ribs at Electric Beach on the Wai'anae coast as the sun hung low and the surfers were getting ready to come back in for the night.

The marinade itself is quite easy. Take a cup of sugar, fine chopped garlic, choppped green onions and some Coca-Cola, and you're good to go. If you really want to add a twist, some grated ginger and roasted sesame oil might be a nice touch. Otherwise, it's very simple. Dip the meat into the marinade, coat all sides and place in a pan. Wait one hour for the meat to absorb the flavor. Unlike most marinades, do not soak the meat in the bulk marinade. It's meant to be dipped and then set aside. Of course, it's okay to cover the meat with the remaining vegetable bits from the marinade and you can drizzle a bit more marinade over everything. That's okay - but no soaking!!! 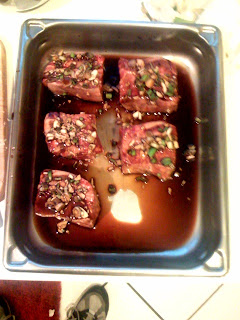 In the pan and ready for action!

While you're doing this, you can get the fire going. It's always better to cook this over a wood or charcoal fire. The gas grills you see at yakiniku places will suffice, but a charcoal fire is better. And let's not even begin to discuss cooking on the stove in a pan or in the oven. Kill yourself now, please.

Once the coals and the grill is hot, place the ribs over the fire and let her rip. These cuts were so thick, I ended up carmelizing them on all sides for an even look. Typically with Korean style short ribs cut 1/4" across the bone, it's a quick sear on both sides and then eat with lots of rice. But for this adventure, a more thorough approach would be necessary.

Once the meat was seared on all six sides, I moved them to the far side of the grill away from the coals - the cool spot, where they would continue roasting for another fifteen minutes to cook all the way through. It's a common technique to use with just about any thick meat and the reason why you don't cover the entire grill with coals. Now pulled away from direct heat, the meat can finish to a beautiful medium. 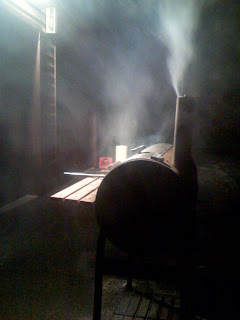 Roasting to a perfect medium.

I regret that I don't have images of the finished ribs but sometimes I'm just a bit consumed with consuming and forget to take a picture. This was one of those times. The ribs were a bit on the tough side since they were so thick. I think that the marinate plus four hours in the smoker might make for an amazing experience. Perhaps next weekend.

Sang was killed nine years ago in some sort of freak accident I never understood then and still don't understand today. He was a good friend and has been sorely missed. He was one of the friends I always though we would grow rich together. He in the cleaning business, me in the movie business. So much has changed since then and every once in awhile I remember an old friend with the recipe he once shared.