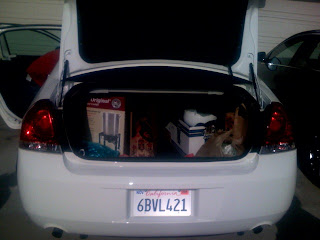 The Impala loaded with foodstuffs for the journey to Woodland Hills.

Since I was heading out to Las Vegas for Chuck's 40th Birthday Bash, I decided not to hassle with the holiday travel crush and headed to Los Angeles to hang out with Al and Polly for a week and spend Thanksgiving with our West Coast friends. Planning for our holiday feast started a couple weeks ago and since I've become increasingly focused on quality foods, I encouraged everyone to do the same.

Okay, maybe I was a bit more forceful than "encouraging" since Polly told me after I arrived that everyone felt "pressured" to make something tasty and with thoughtful ingredients.

Sadly for me and my peers, our generation is one of poor eating. Even before I developed this newer sense of awareness, I was continually aghast with the quality of food my friends would lay out at various parties and gatherings - lots of thoughtless slop mish-mashed together into a non-cohesive whole that was a cornucopia of processed and low-grade food The classic example of what plagues our nation today.

I wasn't about to spend all this money and time to fly to Los Angeles for a crappy Thanksgiving meal, so I admit that I was a bit more than "encouraging" in my e-mails, and if it stressed everyone a little to think harder about their food and source their ingredients thoughtfully, then all of us gain. 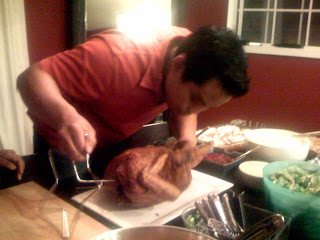 Al wrestles with the fried turkey.

Working outside of ones' kitchen is always a challenge. At home, I know that I've got an assortment of sieves, pans, pots, Cambros, spiders, knives, high-temp spatulas and a china cap to assist me in my culinary visions. When on the road, one never knows what to expect and since our totalitarian government wants to incarcerate anyone carrying a chef's knife on the plane, it meant leaving home with only a small tub of Italian Sea Salt in tow for our adventures and cooking with whatever tool assortment that was handy. No cherry pitter? Then hand me that small Ginsu Knife and let's get cracking!

I set up a small to-do list that I asked Polly and Al to carry out beforehand since I was only arriving the night before Thanksgiving. Source a nice Diestel Turkey, rinse, dry, salt and cure in the refrigerator, unwrapped, since Monday was the first task. Create a chicken stock was the second. Happily, I arrived to a brillant-looking turkey and a gallon of fresh stock: happiness.

After a quick trip to Super Whole Foods to secure some the final ingredients, we got things rolling. First off, were the sauces: Apple and Cranberry. Laila made those. Peel about five sweet apples, core, chop and toss into a sauce pan with a stick of canela or Mexican Cinnamon. Heat, stir, reduce until it becomes sauce. Add some water, if necessary.

I really don't know the draw with cranberry sauce, but since it's "Americana" we were going to do it. Toss a couple pints of fresh cranberries into a sauce pan, add some water, heat and reduce until it breaks down into sauce. Add sugar to taste. Easy peasy - just takes a little time and patience. 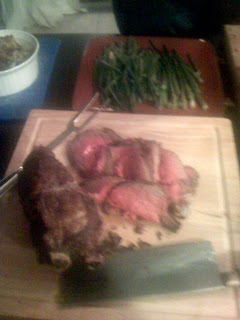 In the morning, Al got his garlic mashed potatoes rolling. Boiled potatoes mashed with garlic, butter and cream. Salt to taste. It was smooth, creamy and oh so garlic-y. Perhaps a bit more garlic than I would have used, but as they always say: "there can never be too much garlic."

In the morning, we piled everything, everyone and the two dogs into my brand spanking new (with only 5 miles on the odometer) Chevy Impala for the forty minute drive to Anna's place in Woodland Hills. 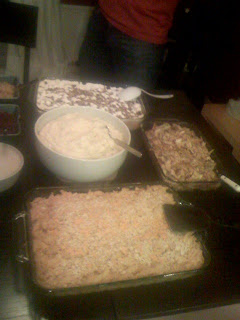 After a wild goose chase looking for a place to refill the propane tank for the turkey fryer and a stop at Vallarta Mexican SuperMercado, we finally got down to some serious prep for our Tday feast. Polly did a quick julienne on some potatoes and Al blanched and fried them into a wonderful papas fritas snack for everyone to enjoy and tide them over until dinnertime. It also gave us a little season for the virgin peanut oil.

I've got to say that while the "pressure" may have been on, everyone stepped up to the plate and really made some stellar dishes. Anna, being our host, went all out by roasting a prime rib, making an au jus and freshly baked Yorkshire Pudding. Christine and DJ Un-G whipped up a Three Cheese Macaroni and Cheese with cheese from the Silver Lake Cheese Shop and a Cumin Cabbage casserole. Christine had offered to pick up some coffee but I already had a bag of Ethiopian Biloya from Stumptown in tow (a gift from 2005 USBC Champion Phuong Tran). 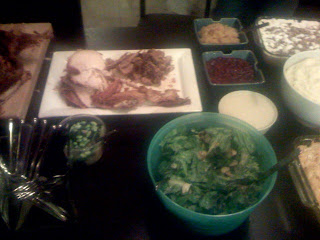 Debra, the much loved vegan of the group, brought along Tofurky and stuffing and an edamame salad to meet her dietary needs. She also brought her mom in tow who is visiting from Mexico City. We exchanged great stories about Mexican food and the places to eat in the D.F.. Evidently, she doesn't think too fondly of Patricia Quintana's Izote but does think very highly of Aguila y Sol - a "must eat" for my next trip to Mexico City.

I could write more, but the true enjoyment of the meal was not the food but the gathering of old friends. Friends who I haven't seen in quite some time. It was great just being with them and even better because they really made some wonderful and thoughtful food.

I hope all of your Thanksgiving feasts were just as fulfilling. 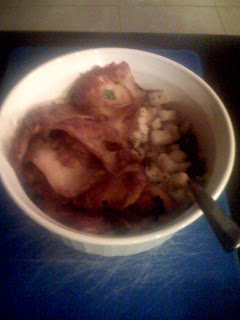 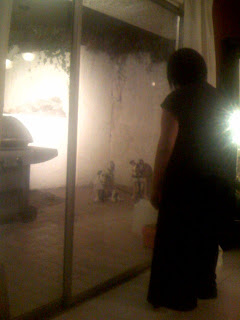 The Boys, Tonka and Moses, guard the turkey fryer and grill outside. 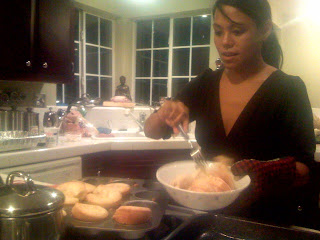 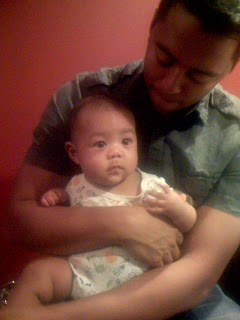 This was Ian's first Thanksgiving. 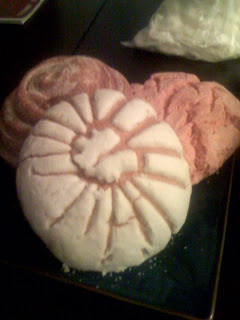 Conchas from Vallarta Supermercado as a precursor to dessert.