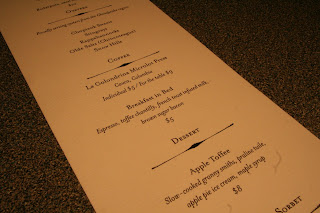 .
Breakfast in Bed on the February 16th Specials Menu at Woodberry Kitchen.


Since this will end up being my signature drink for the up-coming 2008 United States Barista Championship being held in Minneapolis, Minnesota from May 2nd to 5th, it's probably a bad idea for me to post this.

The idea for Breakfast in Bed has been floating around in my mind for a couple of months now. When I mentioned the idea of pairing toffee with bacon in a drink, the typical reaction was one of horror or disgust - like, how could I even think of doing something so ridiculous.

Like any "original" idea, this one is rooted in the teachings, lessons and wisdom of others. I'm not the first person to think of this crazy combination. The initial idea was sparked by Chef Jesse at Abacrombie Fine Foods in Baltimore with her dessert called "Breakfast for Dessert." An interesting combination of fruit, maple syrup, bacon and brioche.

The problem was that I really wasn't sure what form a drink inspired by that dessert should take and how I should approach it. Plus, I've been so darned busy with running The Spro that details like a competition signature drink just fell to the wayside.

Shoplifters Of The World Unite And Take Over
Things really started churning during my London trip to visit reigning World Barista Champion James Hoffmann and his faithful Irish sidekick, Stephen Morrissey (of Square Mile Coffee Fame, not of The Smiths Fame). During my short few hours at the new Square Mile Bat Cave, James shared with me the approach to his "doughnut" drink from 2006, as well as kicking around ideas on how to make the "Frozen Cappuccino Experience."

Determined that "Frozen Cappuccino" was more stunning that some silly breakfast drink, i returned to the United States and got cracking. With only a week left before the Mid-Atlantic Barista Competition, I started experimenting with freezing coffee and cream and how to deep-fry it oil. The idea was to have a molten center surrounded by a french toast fried exterior a la Wylie Dufresne's "Fried Mayonnaise."

It was sheer and utter disaster.

With only three days to competition, I decided that maybe the Fried Cappuccino Experience wasn't quite ready for prime time and started to focus on Breakfast In Bed.

Getting In Bed With Tiffany
It took two days of experiments, but making Breakfast In Bed is really quite simple and straightforward - especially if you have kitchen resources at your disposal.

Like the previous competition signature drinks I've been involved with, the most important factor for the drink is that it must be repeatable on the line. It must be a drink that can be made on a daily (or at least regular) basis. It cannot be one of these one-off extravaganzas you so often see at barista competitions that are so complex that no one wants to make them ever again.

Note: I still consider this drink "in progress" which means that I'm providing you with a rough formula for making the drink. Like most cooking, there's some wiggle room. Just pay attention to the general ratios and you can size it up or size it down. Remember, the batch sizes here are to supply the line for service and not just four drinks for four judges.

Beat the eggs in a mixing bowl, mix in 3 cups whole milk and vanilla bean with seeds to make the French Toast Batter. Dip Pan de Mie slices in batter and pan fry in batches with butter until golden on both sides. Dredge cooked toast in maple syrup and cool in a large sauce pan until all the bread has been cooked. After, break French Toast into chunks.

Note: Avoid the temptation to eat your ingredients. Or perhaps use the remaining 1/4 loaf to make French Toast for your breakfast.

Add Half & Half and remaining milk to saucepan and heat on medium heat until the mixture begins to simmer. Do not boil. Once the mix begins to simmer, remove from heat and allow to cool. Transfer to a cooling container (like a Cambro) and refrigerate overnight.

The next day, strain and squeeze bread solids from the liquid. I like to strain twice with a fine holed China Cap and then strain it twice more through a Chinois. The more you strain the infusion, the better the texture. You could do it ten times a la Thomas Keller, but I think twice is just fine.

Sweeten with organic cane sugar to taste. Like salt with savory foods, the sugar here helps to "pop" the flavor of the infusion. Otherwise, the flavor will remain "flat."

Heat sugar and butter in saucepan over medium-high heat until the two have combined and darkened to the right flavor for toffee - roughly 350F to 400F degrees. You can do this with a thermometer or by taste - just be sure to let the sugar cool before tasting. However, be careful not to burn the toffee. Once you get close, things really pick up speed and you can easily lose control of the process.

Once you've reached the right point for your toffee, add the heavy cream. There will be boiling, bubbling and sizzling. The toffee will seize into a hard glob. This is okay and perfectly natural. Lower the heat to medium and keep stirring. Once the liquid heats, the toffee will loosen and emulsify into the cream. Remove from heat and allow to cool. Transfer to a Cambro and refrigerate overnight.

The next morning, expect a layer of fat to have formed on your chantilly mixture. Skim the fat and strain mixture through a chinois. Pour a portion into an ISI Whipper and single charge the container - you can double-charge the whipper for a more foamy texture.

Spread bacon on a parchment lined (or silpat covered) baking sheet, dust with brown sugar and bake at 300F degrees until the bacon has cooked through and the sugar has carmelized into a glaze.

Cool and chop into bits. Store.

Getting Down with BREAKFAST IN BED

Now that your mise en place is ready, it's time to get cracking. Grab a 3z demitasse cup, preheat then pull a single shot of espresso into the cup.

Steam and froth a portion of your French Toast Infusion and add to espresso a la macchiato.

Top with Toffee Chantilly from the whipper and sprinkle bacon bits on top.

During the Mid-Atlantic Regionals, I also decided to serve Breakfast in Bed with an accompanying fresh-squeeze orange juice chaser.

The drink should be pleasantly sweet with a delicate balance between the french toast and the coffee. The idea is to combine all the good things about waking up in bed - sans the pretty girl next to you. While I was proofing the drink at The Spro, I used the La Marzocco ACF demitasse cups which were the ideal size for a single shot and french toast infusion. But for the competition, I pulled out the old Crate & Barrel glassware which I used for the 2006 USBCs' Coffee and a Cigarette. The problem with the glasses is that they are a bit larger than the demitasse cups, which throws off the balance slightly and the judges reported that the coffee was being "lost" in the mix.

Personally speaking, I dispute those claims because i tasted their drinks backstage, but they're the gatekeepers.

Chances are that you will see Breakfast In Bed again at the USBC. In the meantime, check in at The Spro because it's going to hit our menu there soon.
Posted by onocoffee at 10:01 PM 3 comments: