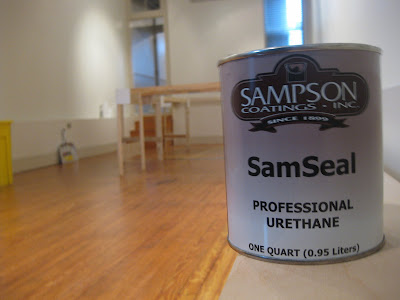 With photos like this, maybe SamSeal will sponsor project hampden and save me eighteen bucks!

I've never refinished a floor before. I certainly have thought about it, but never have I actually done it. Until now. With a little guidance, it was surprisingly easy and for a few moments, I thought that I might change vocations - going door-to-door, bringing a little happy-happy joy-joy to peoples' lives by refinishing their hardwood floors.
Posted by onocoffee at 6:58 PM No comments: Links to this post 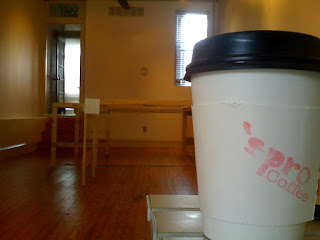 The first cup of coffee in project hampden.

This morning I'm back in project hampden, to the first nice summer day we've had in a month, with coffee in hand fretting about my upcoming trip on Wednesday, will I have everything done in time before I leave? Really, I'm starting to see how foolish it was of me to schedule trips in late August and September. So much to do and time just runs out.

Most of the work we're doing in the space has been completed. Except, that is, for this one piece of floor trim that I've been mysteriously avoiding. Ever have those little tasks that you keep putting off? This piece of trim has been mine in project hampden. It's a gap in the floor trim that's needed to be filled in since we took out the knee wall and I've just been avoiding it and I guess I can avoid it no longer.

Otherwise, things are moving. Had an estimator come in for the plumbing and electrical work. The millwork quote is in and we're slowly rolling. I'm hoping for a 2009 opening - but no later than 2012...

Posted by onocoffee at 10:19 AM No comments: Links to this post