My older cousin, Ate Ellen has been in town this past week - "ate" being pronounced: "Ah-teh" and is the Filipino honorific used for older female cousins within a family. She's here visiting from the Philippines and has been hanging around the house, enjoying her vacation and doing as little as possible. She's also been advising me on certain Spanish-style traditions, so I don't muck things up with my American approach and mentality. To thank her, we went out to eat on her last night in town at the new Cinghiale-Osteria in the Harbor East project of Baltimore. 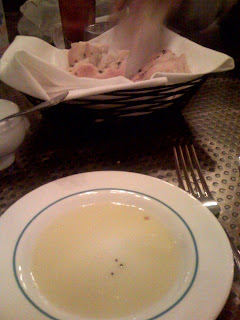 I'll be honest, while I had heard a few positive comments from friends who had gone down to Cinghiale in the first couple of weeks, I wasn't expecting much. There are many who expect great things because they love the sister restaurants: Charleston, Pazo and Petit Louis. I am not one of those people. I've found the sister restaurants to be lacking and I find the "it" scene at Pazo to be utterly detestable. I spent one too many years in the movie business and want none of that celebrity tomfoolery.

First of all, Cinghiale is a beautiful space. I've heard rumors of them spending four million on the place and it looks it. Beautiful craftsmanship in all of the details, from the tile to the boar's heads to the very sexy wine storage. I wish I toured the kitchen. We ate on the Enoteca side (by the bar) since it was nearly 10pm when we arrived but were offered the restaurants' entire menu. Nice. 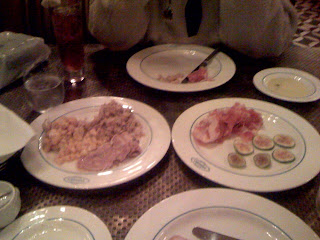 On the left, califlower, tuna and roasted boar terrine. On the right, parma ham and fresh figs.

Cinghiale is different than other Baltimore Italian restaurants. I see it as a more rustic, country cooking rather than the southern-style red sauces that dominate much of the Italian landscape here. Not that southern is bad. It's just ubiquitous and expected - and I have to say that Cinghiale gave us the unexpected. 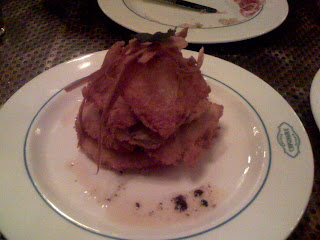 Our first round started off with a variety of items, from marinated califlower to a tuna salad, roasted boar terrine, Parma ham and fresh sliced figs. The execution was nice but I found the flavors to be subtle and almost bland. Everything was well prepared, there were just no powerful flavors. The califlower was crisp and punchy in texture but mellow in flavor. Same for the tuna and terrine. The Parma ham was very thinly sliced and piled on the plate and the figs were beatifully fresh but lightly sweet.

The next round brought us the crispy vegetables and raw beef. The beef was decent. Thinly sliced and covered in an arugula olive oil puree. Again, the flavors were subtle and delicate. Well-executed, but nothing to fantasize about. 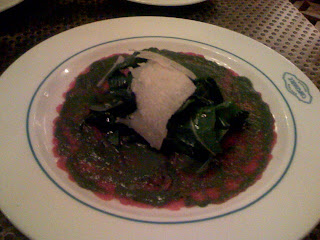 The crispy vegetables or Il Fritto Misto took a departure. They were excellent. Fantastic. Probably the best course of the meal. Perfectly seasoned breading, perfectly fried and the flavors were delicate, multi-layered and intense. I will always remember the red bell pepper. It's flavor popped on my senses. Amazing. Sublime. I wanted more.

Seems that chef Stefano Frigero is moving the restaurant in a seasonal direction with more locally sourced ingredients. This is a good thing. And it's good to see our friends from Springfield Farm listed on the menu with their farm-raised rabbit. This time the rabbit is encased in tortellini. Like the other courses, it was delicate, nuanced but not bold. The rabbit was ground to a very pleasing texture that was crumbly without being that pasty mash so many other tortellini stuffings insist on being. Served in a light broth, it was pleasant. 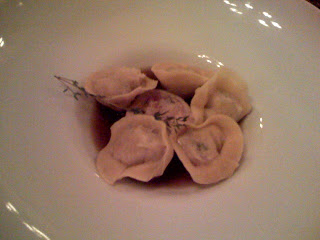 Next round kept us om pasta territory with sausage stuffed ravioli. Again, nothing bold. They were okay. Nothing memorable except for the execution. Wish I could say more but this was the "John Doe" of our meal.

Our meal ended with an order of the rice pudding with pears and a baked chocolate bar. I have to say that I loved this round. Second only to the fried veggies. Sweet without being overpowering. The rice cooked to the perfect texture that's not soft but not hard, the pudding creamy, the pears crispy and the chocolate the perfect accompaniment. 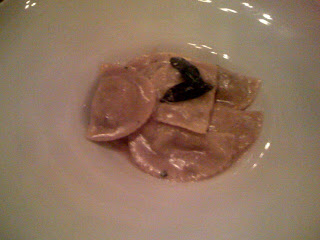 All in all, it was a good time at Cinghiale. It wasn't "the best" Italian meal I've ever eaten. It was well-done and wonderfully executed. The flavors, while not bold, were new and different in the city - which makes it a refreshing change. Because it's so different than other Baltimore Italian restaurants (and the sister restaurants as well), it can be a bit difficult to make sense out of Cinghiale. If you're looking for veal parmigiana or fettuccine alfredo then you're not going to like this place. But if you're looking for good food that's different and going to expand on your understanding of Italian cuisine, then Cinghiale is the place.

I know I will be going back just to see what's new. 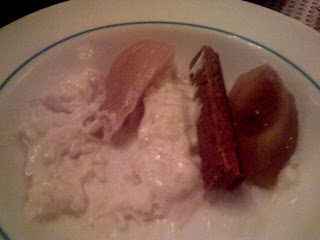