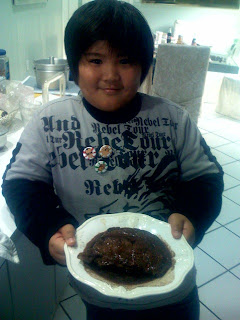 Chef-in-Training Paoi and his signature steak cooked in bacon fat.

After hitting the Waverly Farmers Market and Springfield Farm loaded with groceries, Paoi and I set about making a meal before his flight back home to Las Vegas tonight.

The farmers market is on the lean side this time of year. While during the summer, you can find most anything you desire, in early January it can be slim-pickins. We arrived around 10:15am and there was a good selection to choose from, but by 11:30, the pickins were slim indeed.

Out at Springfield our selections were simple: just two ribeye steaks and a tour of the farm to see ducks, geese, chickens and Petunia the mother hog. Not to mention a large load of product for Woodberry.

Back at the house it was time to get to work. Paoi's got an interest in cooking so this was his meal. I was just instructing. Preheat the oven to 450F. Slice the bacon in ladron sized chunks and fry. Season the ribeye with salt and pepper. Slice a Fuji apple. Arrange a bowl of mesclun mix. Check the bacon. Warm the rice. Decide on a raspberry vinaigrette. Pull the bacon and dry. Sear the steak on one side. Mix the salad. Turn the steak and into the oven. Set the table. Grab a couple Mexican Cokes from the downstairs fridge. Open a bottle of red wine. Cut a piece of butter. Pull the steak after seven minutes and set on a plate to rest. Deglaze pan with wine. Mount with butter. Pour over steak. Serve and eat.

Not a bad way to end your visit to Maryland, I think.
Posted by onocoffee at 5:40 PM No comments: Links to this post 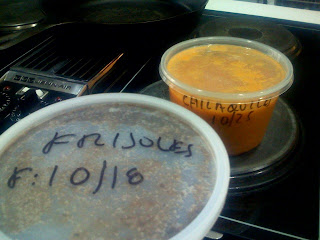 Just a little something-something for breakfast.

Posted by onocoffee at 5:39 PM No comments: Links to this post