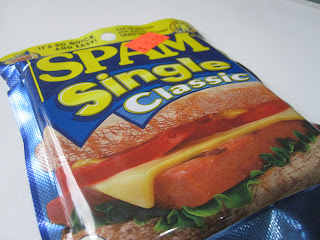 As I was perusing the aisles of a local Asian market, I spotted something familiar, yet strange.

Truth be told, I didn't grow up with a silver spoon in my mouth. My parents immigrated here and we lived rather plainly throughout my youth. None of this farm-to-table nonsense. Cheap cuts of meat, lots of canned corned beef, canned vegetables and whatever else twenty bucks could by at the grocery store - and according to Mom, twenty bucks in the early 1970s could buy you a weeks worth of groceries.

As such, we ate a lot of SPAM in my house. Not as much as people in Hawaii, but quite a darn bit of it. So much so that opening a can of SPAM with that old twist tab wasn't odd, it was fun and we argued over who got to open the can. From there, it was salty, hammy goodness mixed with rice. Until...

One day my Dad did something wrong, creating the dish that would be memorialized in our house as "Daddy's Mistake." 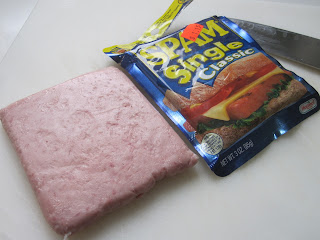 Now that's weird - even for SPAM.

I don't quite know how it really happened (I'll have to ask Dad one day), but it was SPAM served with hot, steamed white rice, fried egg and ketchup. Mash the eggs and rice together and season to taste with the ketchup, serve with fried SPAM and you're in business!

I know some of my gentle readers are recoiling in horror as they read this, but rest assured, it's not as bad as you think.

Now that I'm older, the problem with SPAM (besides the obvious industrial aspects) is that the cans are quite large. For SPAM Musubi, I can make eight musubi from one can. That's simply too much SPAM for one person. God knows I'm not going to eat it more than once, what would I do with the rest of the can? Julienne it and make it into Island Style Noodles???

Okay, I like SPAM, but not THAT much! The ubiquitous use of SPAM in Hawaii freaked even me out. 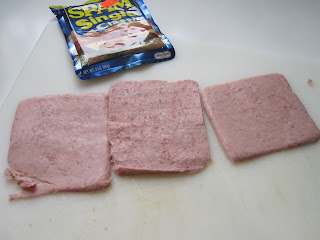 Personally speaking, I'm a contrasting texture freak. Meaning with all these soft ingredients, like the rice and eggs, I want a textural contrast. I want some crunch. This translates into a desire to fry SPAM thin and crispy (or as crispy as the industrial nature of SPAM will allow).

The brilliance of SPAM Singles is that I can eat it and not waste any. It's enough. Actually, it might be more than enough, but we're going for it anyway. After slicing the one into three thin sheets, into the frying pan they went - probably at too hight a temp. Perhaps the best way is to start with them in a warm pan and heat it up gradually until it crisps (more testing to come). 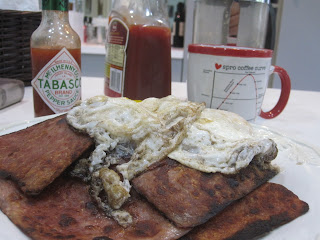 Once done, add some butter to the pan, crack a couple of eggs and go to town. Layer the eggs over the rice, break the yolks and mix until the rice is evenly coated in yolk then add ketchup to taste. Eat with SPAM.

The memories are almost as vivid as Adobo Sandwiches on Road Trips To Florida.

But those are stories for another day.
Posted by onocoffee at 4:00 PM 1 comment: Links to this post