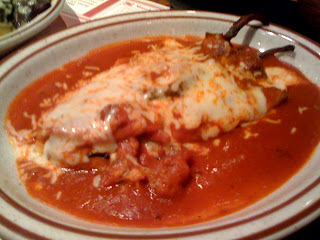 It's been said that I can go for Mexican food just about anytime. Sometimes, I just can't get enough.

The food critic for the Baltimore Sun, Elizabeth Large, writes a blog called Dining@Large that I read from time to time. I don't usually agree with her assessments or that of the readership, but it's important to remain open-minded about places that people recommend because you might find that gem in the rough - like Three Chefs carry-out.

In recent threads about Mexican food, several people recommended Los Portales on Aviation Blvd. right by the airport. I'm not usually in that area but since I was coming up from a late meeting in Washington DC, I thought I would swing by and check it out.

If this had been April 2007, I think I would be writing a very different entry. Funny how time changes things.

For those of you who recommended Los Portales as a truly "authentic" place, I have to wonder just what reference point you're relying on? Taco Bell, maybe?

Don't get me wrong, Los Portales isn't "bad" but it certainly isn't "good" and definitely isn't "authentic" - at least if I compare it to the food I've eaten in Mexico City. 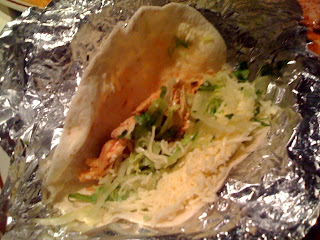 I really started off hopeful when I pulled up and realized that this wasn't some simple joint (like many of the Latin eateries). It's quite nice inside with festive decorations and carved wooden chairs. Of course, the Cerveza Corona Countdown to Cinco de Mayo digital clock should have clued me in that Los Portales was more Chi-Chi's than El Bajio.

The staff is all Mexican and really only spoke to me in Spanish - of course, they kept speaking in Spanish even when I answered in English and I got the feeling that it was one of those "you must be Latin so we're going to speak to you in Spanish because you need to remember your roots" moments. I didn't bother to tell them that I'm not Latino and tried to do my best en Espanol because it helps me to learn more.

Of course, I'm still struggling with basic terms such as: listo?

Los Portales offers a large selection of items, with combination platters and full dinners. I decided to go with a couple of small items, like: taco de pollo and chile relleno to start and an order of their enchiladas poblano as the main dish.

Okay, so I'm in a "traditional" Mexican restaurant. The first two courses should be small items just right for a pre-meal snack, right? Wrong. There are two chiles in the relleno and they're stuffed with cheese and are bathing in salsa rojo. The flavor is decent enough but there's no punch. Good thing there's cheese 'cause it's the only saving grace for the dish.

Next up is this large plate with a half-moon of aluminum foil wrapped around something that suspiciously looks like folded tortillas. For a moment I think it might be a side order of tortillas then I realize that it's the taco. As I pull the foil apart, I'm shocked and appalled. Inside is a large, flour tortilla stuffed with shredded chicken, shredded lettuce and shredded cheddar cheese. Jesus, Maria y Jose. It's about as good as it sounds and I eat only a couple of bites just to be sure. 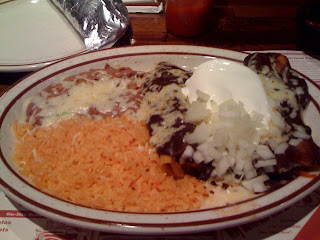 Finally, it's time to check out the enchiladas. Holy Cow, there's a mother-honkin' large mountain of sour cream on top of my enchiladas, along with suspicious-looking tomato red rice and what tastes like canned refried beans topped with more shredded cheese. The enchiladas are rolled and the poblano sauce is looking a bit dry in spots on top of the rolls. Ay, carajo, I bet they've been microwaved.

Unlike the deliciously rich and complex mole negro that I'm used to, this one tastes flat and lifeless. In fact, I can't really taste the sauce since it's overwhelmed by the copious amount of sour cream - and I scooped most of it off.

What I had been expecting to be a pilgrimage has turned into a disaster.

But I hate to beat up on restaurants that are serving food that people enjoy, so I try to look at it from a different perspective. A perspective that's never eaten tacos off the streets of La Zona Roja in Tijuana for fifty cents, or nearly spasm'd from the boiling hot quesadillas in front of a Mexico City supermarket, or have the benefit of Mexican friends who cook truly authentic cuisine. I think of those whose reference for Mexican food is Taco Bell and Chipotle and for them, I bet that Los Portales really seems "authentic."

So, if you're someone (white) who loves celebrating Cinco de Mayo while chugging Corona and gorging on Nachos and crispy corn tacos with lots of lettuce and cheese, I think you'll find Los Portales to your liking.

But if you're someone who dreams of mole Poblano and understands the nuances of stewing your chilaquiles or using fried tortillas for that crunchy juxtaposition, then you'll probably find Los Portales to be a bit too gringo-fied.