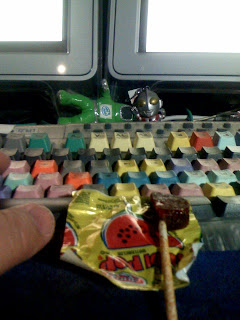 My thumbs are numb and my fingers feel clogged.

I've spent the past thirty-six hours cooking, cooking, cooking. First it was pizza night at Woodberry Kitchen where I slow roasted my right hand in a six hundred degree oven. This morning it was setting fire to the smoker for my test run of a smoked, slow cooked carnitas. I spent the afternoon shopping for peppers, tortillas and other ingredients. Then I spent the evening firing up the grill to super high heat to grill some chicken, roast tomatillos, char peppers and continue roasting my right hand in the process. To top it all off, I had to deskin and clean all of the poblano and jalapeno, which may be causing the slight buring sensation in my hands and on my face. Good thing I didn't scratch elsewhere...

Right now, I'm sitting here with worn out hands and eating a very interesting watermelon lollipop from Mexico that's been coated with guajillo chiles. It's something that Ana likes to eat and surprisingly, it's not really hot. It's more salty and very reminiscent of the li hing mui candies that we eat in Hawai'i. The pepper is layered on pretty thick so it takes some time before you get to the watermelon candy, but once you the two combine, it's really quite good. Sweet and salty, with just a bit of spicyness.

I think I have to order more. That is, if my hands recover...
Posted by onocoffee at 11:59 PM 1 comment: Links to this post 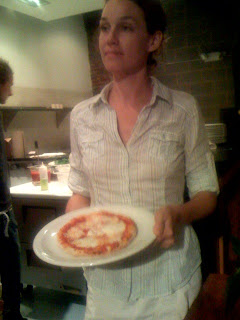 Amy holding the very first pizza made at Woodberry Kitchen.

After a few weeks of being in a State of General Malaise, I feel as though the myopia is lifting and I can resume my pursuits once again. Found myself at Springfield Farm yesterday morning stocking up on meat and eggs then down to Woodberry Kitchen in the afternoon to have a go with the first firing of the new brick oven and pizza-making.

I've never made pizza before. I'm not much of a baker - too much precision, too much rigidity. Add too much of any ingredient and the whole thing falls apart. I'm more of a cook - a little of this, a dash of that. Oops! Too much salt so I'll balance it with a little sugar... All in all, it's shooting from the hip and more along my style. Of course, I've made breads. I used to tremendously enjoy baking baguettes at home. Rising the dough, punching it down and then crisping the crust. Heavenly.

But I've never made pizza.

I came a bit late because the dough had already been made and Spike, Fred and Isaiah were in the midst of kneading it out, so I joined in. Ten minutes of kneading. It's tiring work but rather amazing to feel the dough change texture as we proceeded. Once done, we divvied it up and let it rise. A couple hours later, with the oven stoked up to 550F, we were ready to begin. 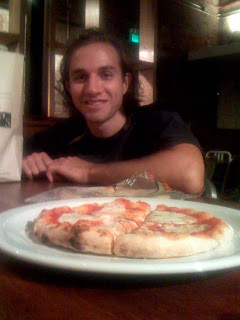 Isaiah with his pizza creation.

Most of us have watched someone make pizza and it looks relatively simple. Just roll out the dough, shape it, maybe toss it, cover it with toppings and you're good to go. I found out that looks are definitely deceiving. The goal was to make thin-crust pizza with a nice, oven baked crisp to the dough. Finding the technique that would allow the dough to crisp while maintaing a uniform shape with a piece of dough is truly an art unto itself.

I found that you really need to stretch the dough, until it's nearly translucent, to achieve the kind of crust I was shooting for: crispy with just a slight chewiness without it being burnt. During my trip to Tokyo, I had eaten at Salvatore Cuomo's pizza joint in Ginza. Back then I watched the pizzamaker in action rolling out pies, slinging them into the oven and pulling them out two minutes later perfectly baked. That pizza was heavenly.

This pizza wasn't quite there yet. I quickly realized that we should have stoked the fire even more. Six Hundred degrees Fahrenheit just wasn't hot enough. We needed 700F or perhaps 1000F to achieve that two minute cook time I witnessed in Ginza. While the fire wasn't as hot as I might have liked it, the pizzas weren't bad. They were pretty good considering it was our very first outing.

Everyone tried their hand at pizza making. John and Roya came over from next door. Fred came down from the hill. Susan came from across the street. Glen came down from the trees and That Guy Named Skid just took some time off. Everyone made pizza. Everyone ate pizza. I probably ate more pizza last night than I have all year long. 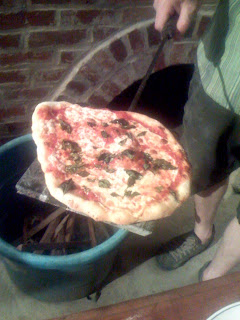 Not content with just watching, I tried my hand at working the oven. Perhaps six hundred degrees isn't hot enough for pizza, but it certainly is hot enough to roast my hand. There was more than one moment where my hand came out beet red. Any longer and I probably could have bitten off a piece for dinner.

Oven management started to fascinate me. How to cook three or more pizzas simultaneously while ensuring that none of them burned and that all of them had an even toast around the crust. After several attempts, I started to find a groove. Getting fresh dough to slide easily off the peel is a tough order, seems you can't put too much flour to release the dough. There was a mishap (or two) where I gave the peel a jerk to release the pizza and all that went flying into the oven was the toppings. Rather embarassing I must say.

Soon, things were rolling. Slide the pizza in, preferably off the left and allow the crust to form. Once the dough has started to form the crust, I found it easier to slide the pie around using an ash tool rather than the short-handled peels I was using. That greater control allowed me to position the pies exactly where I wanted for maximum fire exposure and cooking potential. Pretty soon, I was pulling beautifully baked pizzas out of the oven and waiting for the Italian D.O.C. to stop by with my authentication certificate. 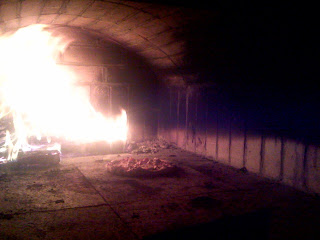 John's pizza getting finished under a hotter fire.

Being that we were in a professional kitchen, we had some fun ingredients to work with. Isaiah had whipped up a tomato sauce as the base and there were grated parmigiano reggiano and sliced fresh mozzarella. We also had lots of fresh tomatoes, onions, sweet peppers, hot peppers and sausage. Finn and Katie took orders and made individual pies, while John took his time whipping up a pizza with yellow tomatoes and other artfully placed veggies.

While the pizzas were all a treat, for me it was the ribeye steak course that took my interest. Spike prepped a steak with some oil, salt and pepper and tossed that sucker right into the oven, nestled next to the fire. A few minutes later, out popped a beautifully carmelized ribeye ready for eating - after a few minutes rest, of course. In honor of the steak, I whipped out a thing pizza dough and just let it bake. Slathered it with butter and then finished it in the oven. Not too long after, bits of steak and bread were flying everywhere. 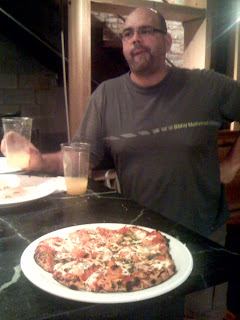 It's gonna take awhile before someone like myself will be able to sling fine crust pizzas but maybe I can somehow convince someone that I could work a shift making pizzas at Woodberry Kitchen. Until then, it will just be these random evenings with friends and good food.
Posted by onocoffee at 10:31 AM No comments: Links to this post