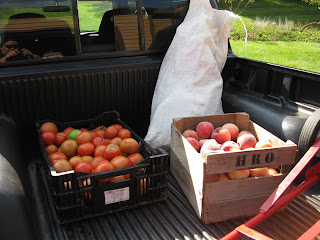 Thursday's bounty from the Towson Farmer's Market: a field case of tomatoes, a box of white peaches and a sack of corn.

On Thursday I made a visit to the Towson Farmer's Market in search of winter provisions. Summer is over and winter is almost here, meaning if I don't stock up now, I'm gonna be S.O.L. (shit outta luck) later - and last winter was a long and bleak one without tomatoes. Sure, I can go to the grocery store or Costco any time of the year but the flavor just isn't the same.

Quite simply, it's been a long day of processing and I'm pooped. My muscles are aching. My eyes are sore. I think I could use a massage. 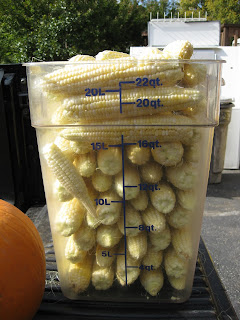 First things first. I've got a sack of silver queen corn. It's the last sack of the season. After this, it's back to canned corn. Not that I can't stand canned corn but why not have it fresh? In a moment of lucidity, I decided to husk the corn outside, next to the rubbish bin straightaway after the market. The warm, sunny weather made it easy peasy and I didn't have to worry about sweeping up the stray corn hairs that kept falling to the ground. Toss them into a large Cambro and all is well. 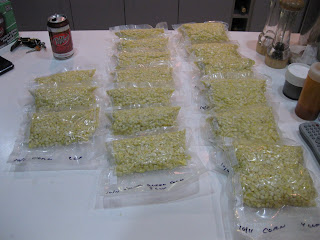 Fresh corn for the winter.

Next step: cut the kernels off the cob. Just hold them vertical and slice downward. It's tricky controlling the kernels as they fall and some will inevitably fall to the floor. Crap, I hate those. The one thing I never understood about canned corn was how they got such perfect and uniform kernels. I can't do that for the life of me. By nature, some are full sized, some are cut in half. It's a cylinder for God's sake. Some of them have to be cut in half!

Toss the kernels into another Cambro and then vacuum pack into easy-to-use 2 cup and 4 cup servings. That's gonna make my life easier when I just want a little corn for myself and the larger bags I can use when I more people to feed. It's genius. 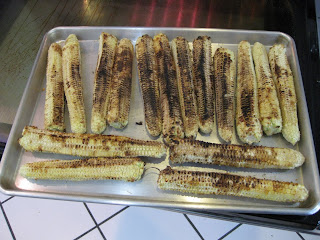 Now, what to do with all those cobs? Just throw them away? That's crazy. Take the cobs, line them in a baking pan and roast them under the broiler. Once they've developed that nice brown color, put them in large stock pots, fill with water and simmer for one and a half hours to create a Roasted Corn Stock. 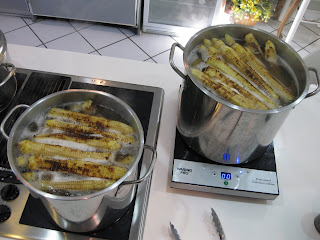 The stock will turn a wonderful deep golden brown and the aroma should be exquisite. Just roasted corn goodness. Actually, I got this idea from Spike who was making exactly this stock when I flew in from Albuquerque on Monday night. The idea of a corn stock just seemed so natural to me that I wondered why more people didn't do it. 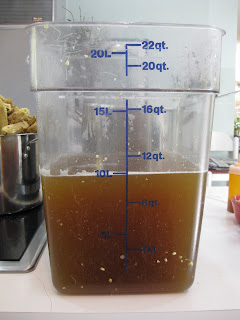 Once the stock is ready, strain in a china cap and return the stock to the pot and boil. Boil the stock and reduce the volume by at least half. This will create the Roasted Corn Demi-Glace that can be used for whatever your mind desires. Back in the winter of 2007, I was playing with the idea of roasted corn and coffee. I never could get the flavor I was looking for an abandoned the project. I'm thinking that with this demi, the dream might return and be fulfilled. 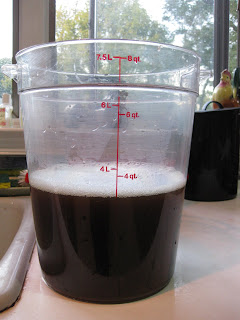 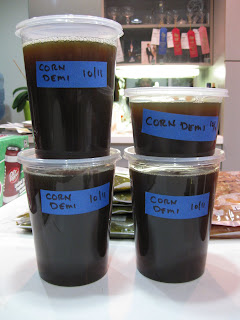 Roasted Corn Demi ready to use. 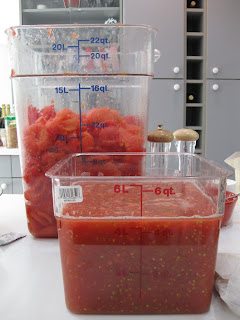 One field case of tomatoes, peeled and seeded.

Processing the tomatoes is slightly less involved but time consuming nonetheless. First start by heating a pot of water to boiling. Score an "X" into the bottoms of each tomato with a sharp knife. Dip each tomato in the boiling water for fifteen seconds and then plunge the tomato into an ice bath to cool. The skins should slip off readily. 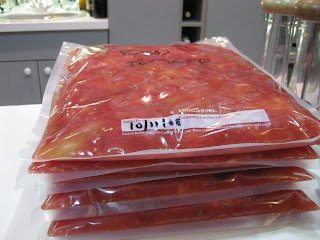 The tomatoes vac bagged and ready for the freezer.

The peeled and seeded tomatoes can then be vac bagged and frozen for storage. A field case of tomatoes yielded quite a lot of tomato pulp that it would be criminal to just toss it into the rubbish - especially when my aunt is a juice fanatic. Salt the pulp and strain in a china cap to separate the juice from the pulpy mass. Once the juice has been extracted, strain the juice twice through a fine mesh chinois. 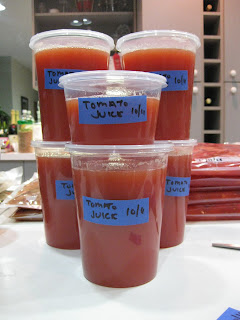 Tomato Juice in containers ready to use.

Once you've strained it, the juice is now ready for consumption. Just add salt to taste, and maybe a little lemon and tabasco. 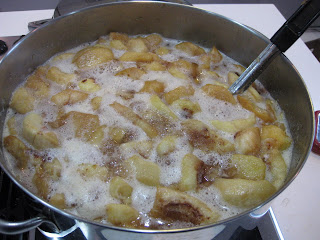 Next up were the peaches. I started off by scoring and dipping the peaches in hot water to skin, but they gave an odd reaction by quickly oxidizing and turning brown. I resorted to cutting off the skin and the brown pulp to get to the clean white fruit beneath. Then I pitted each peach and broke them up into chunks.

Not really knowing what else to do with them now, I tossed them all into a pot, added a bunch of cane sugar and started heating the mixture. I could reduce it down and have a boatload of peach jam but I only wanted to preserve the peaches so I could use them for other purposes. After heating the peaches for about an hour, I cooled them down, separated the fruit from the juice and vac bagged the fruit. 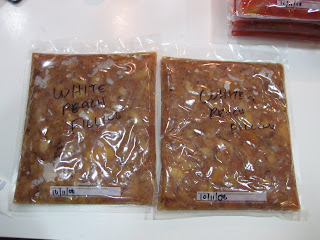 The idea now is to use the fruit as pie fillings for The Spro and then utilize the separated liquid as a syrup.

To finish the syrup, I strained it through a china cap and then three more times through a fine mesh chinois to remove the bits and pieces. The syrup finished out in a reddish pink color that must have been imparted by the skins. I'll use the syrup for maybe a mid-winter Italian soda at The Spro.