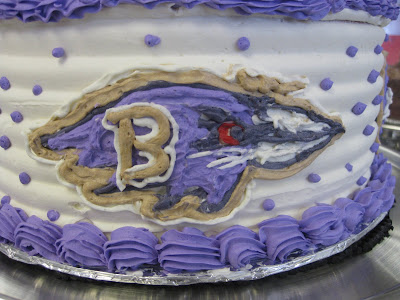 The Ravens Cake by Mom at The Spro.

Traditionally, I'm not a football enthusiast. It was inconsequential to me while growing up. And I'm against using public money to fund sports stadiums to benefit privately owned teams (i.e. NFL, MLB, etc). However, if a state is pushed to providing public money for a stadium then that team should be obligated to deliver. The Ravens, unlike the Orioles, in 2001 delivered not only a winning season and not only the AFC Championship but the Super Bowl victory as well.

Needless to say, we were hoping for a return to Super Bowl glory in 2009. Unfortunately, that will never be. Our proud Ravens were beaten today by the Pittsburgh Steelers. And while I'd like to rant and rave about how the game was stolen from us and how they were cheaters and other folly, I can't. The Steelers simply played better football than the Ravens tonight.

Sadly, just when they were getting their footing and within striking distance, one of the Raven players decided to commit a personal foul that cost the team a 25 yard penalty. Game Over. The momentum they were building was trashed and they would not be able to recover. Just a moment of coolness might have meant the AFC Championship, a trip to the Super Bowl and a crushing defeat to our mortal enemies on the gridiron. But it shall not be.

Instead, we congratulate our players on a job well done. A long fought season that brought them to the brink of victory after having been so close to being eliminated throughout the season.

Maybe it's time to buy season tickets again...
Posted by onocoffee at 11:20 PM 1 comment: Links to this post