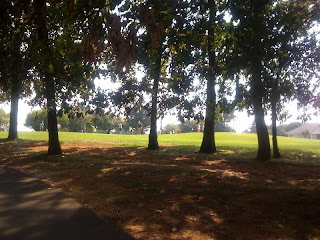 A visual reward at the end of a long round.

My father, a true lover of golf, has remarked that a bad day on the course is better than a day at work.

The Bob is in town and wanted to play a round. Never mind that it's a blistering 100F with humidity and direct sunshine. Never mind that sane people consider this suicide. It's all good, no matter what happens.

I knew it was an off-day the moment I started on the small basket of balls at the driving range. Everything except that satisfying "clink!" of the club against ball. Chops, curves, hooks and slices. Ugly.

On the course it was worse. If I was lucky, the ball would hook. Heat exhaustion and fatigue set in quickly and dogged me the entire way. After three holes, a pattern began to emerge.

Stroke Par to the green then two putt.

Meaning if the hole was Par 5 then it would take me five strokes to reach the green and maybe two putts to sink the ball.

Perhaps not the most inspired game of golf in my life...

Posted by onocoffee at 5:27 PM No comments: