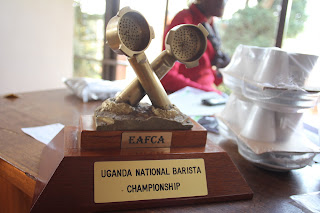 The prize of Eastern Africa.

With 20+C weather outside, Kampala is a lovely place filled with a cacophony of sounds, briliant sights and quite a bit of traffic. Making our way along the crowded streets is a demonstration of the mass humanity filling Africa's cities. Vehicles of all sizes, pedestrians and even the women balancing just about anything and everything on their heads.

Today is the first day of three days worth of training. Two for barista competitors and one for championship judges. I always find these trainings to be quite a challenge because you never know what you're in for. Everyone has been through basic training and passed a preliminary qualifying round, but even in this group of 21 baristas, the experience ranges from independent competitors learning competition coffee for just a few months to seasoned cafe and competition baristas with five years in the field. 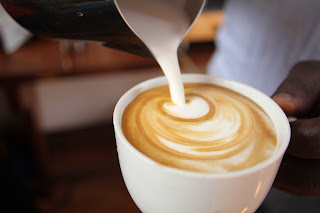 In the afternoon, we review visual identification techniques for cappuccino and espresso, giving the baristas the chance to judge scores on multiple examples of both, familiarizing themselves with just how the judges will be reviewing their drinks. Later, it's open stations for the baristas to make drinks and then we sit down and evaluate the drinks together - giving them the chance to visually score and taste their own drinks for deeper understanding.

Afterwards, the interested baristas hang out roasting coffee, talk about blending and work on more advanced techniques. It's interesting to see who stays behind until the bitter end - it may be an indication of the standings to come. 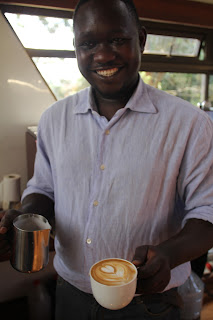 Uganda's 2010 Barista Champion: Mark Okuta.
Posted by onocoffee at 3:35 PM No comments: Links to this post