Ten Years and a Little Hit and Run 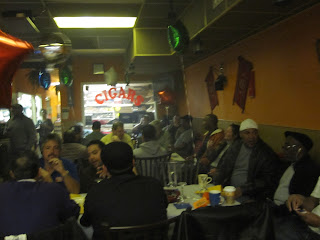 A gathering of 80 of your closest cigar buddies.

I've been enjoying cigars for about sixteen years now and through the years, the proverbial leaf has been very kind to me, introducing me to a wonderful world of friends that would not have been possible without that shared passion. So when Dave called to tell me that they were celebrating Dan's Tobacco Center's 10th Anniversary with a big party, I couldn't say no.

It was smoky. It was thick. It was jammed packed. My truck even got hit by a hit-and-run driver - that's how crazy the party was. A word of note: it's not a good idea to hit-and-run the vehicle of a cigar smoker, because one of his buddies will see it and another buddy is a State Trooper who will now be charging you. And since you've now pulled them out of their revelry because of your criminality, it won't be pleasant... 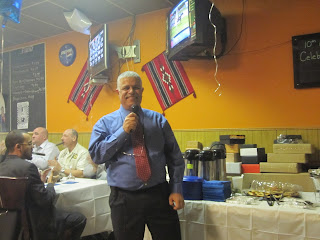 Sitting for hours in a smoke-filled room is, even for the seasoned cigar professional, a difficult proposition. Add some food, some drinks and a little entertainment and time passes enjoyably. Toss in a couple well-timed visits outside and all is well, the port is flowing, the food is plentiful and there's even more dancing.

Happy tenth anniversary Dan and many more to you! 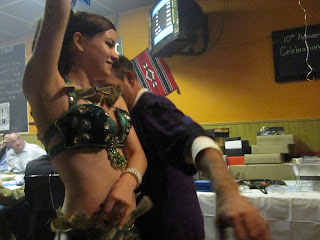 ...and some Middle Eastern entertainment.
Posted by onocoffee at 11:59 PM No comments: Links to this post