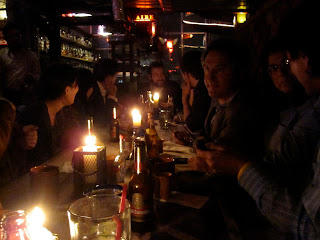 Our table at Andres.

It's World Barista Champion Stephen Morrissey's birthday and we're back at Andres D.C. - for our third time. So much so that we're regulars now - although I think we're wearing out our welcome.

Drinks, food, friends, all is going well until Laura Lee and World Barista Champion Stephen Morrissey decide that it's high time that they build a jenga tower of whatever is sitting on the table. Cups, classes, plates, shakers, ice bins, chairs and more end up on the table as the tower reaches higher and higher for the ceiling.

At any moment, the tower will tumble. WBC Executive Director Cindy Chang is quick to disassociate herself from the fracas. Undaunted, WBC President Mark Inman, in a show of solidarity with his troops, enters the melee, offering the ice bin as a platform.

It's wild and out of control but surprisingly, they make it to the ceiling, leaving a tower to be dismantled by befuddled Andres crew members. 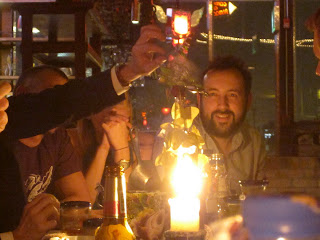 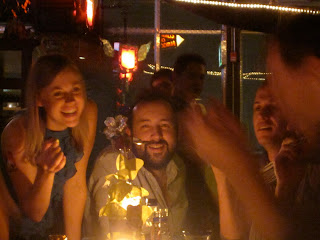 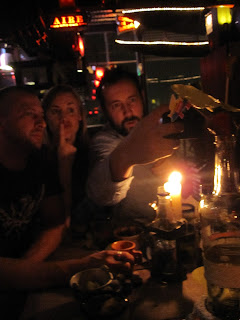 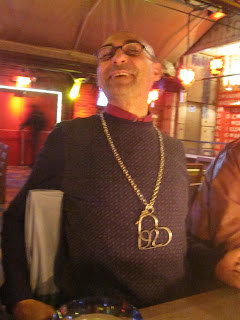 The Fabulousness of Lauro Fioretti. 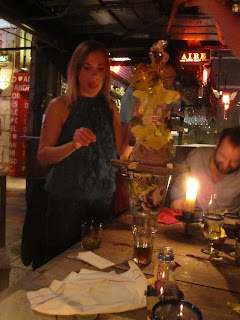 Laura contemplates what to add next. 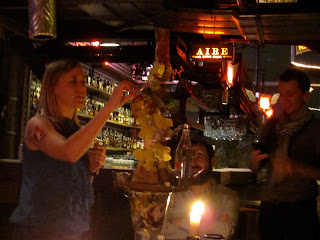 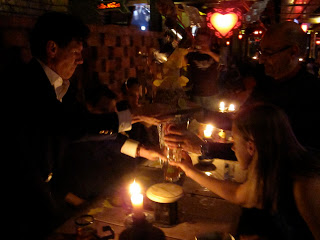 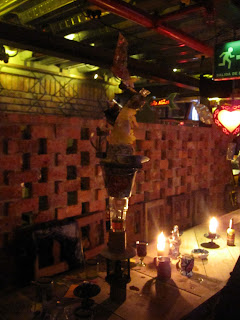 Reaching for the skies. 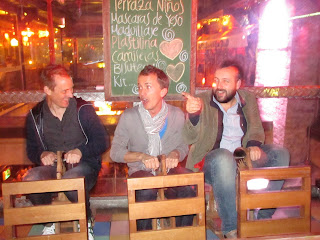 They can't believe what's coming next. 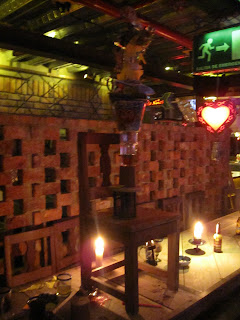 The tower actually touches the ceiling. An achievement. 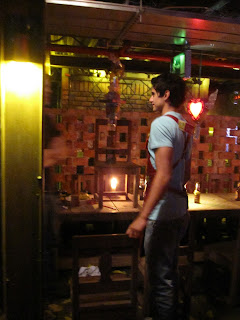 This guy must really hate gringos.
Posted by onocoffee at 11:18 PM No comments: Links to this post 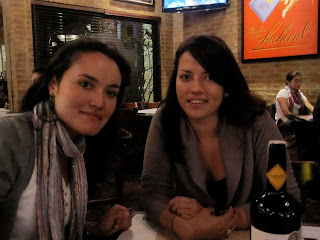 I couldn't believe what I was hearing.

How is this even possible???

Ask any Colombian about hamburgers and you're almost guaranteed that the recommendation will be for El Corral. There's the regular El Corral, which is a fast-food burger joint, and then there's El Corral Gourmet, a place for stylish hamburgers.

I told the girls I would meet and have dinner with them before taking off once again and since we had been talking about El Corral all week, why not? 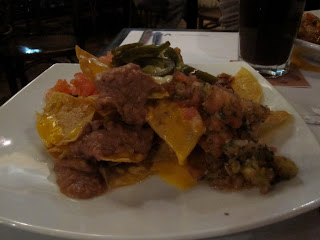 El Corral is pretty typical. Burgers, fries, Coke and other stuff. I ordered the Madrilena, a burger with chorizo & cheese. Pretty good.

The girls had nachos and wings. Somehow I can't help but to think this is an odd thing for them to eat since we're at a burger joint, but I digress. They've done a great job coordinating our movements through the city and taking care of us along the way - and even putting up with all of our foreign idiosyncrasies. Maybe when we return for the WBC we can bring them along with us to handle our logistics once again.

That would be cool. But for now, it's burgers, fries, wings and nachos all the way. 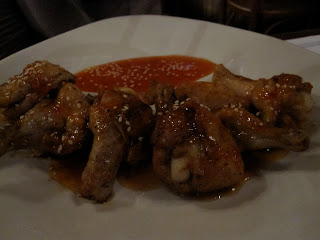 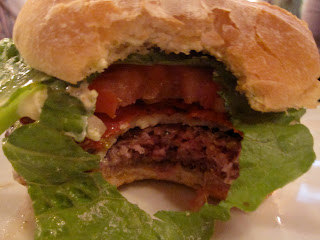 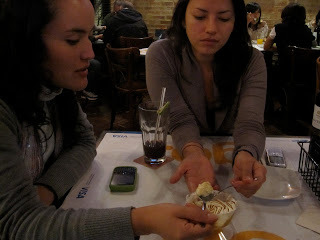 Tres Leches Cake
Posted by onocoffee at 9:14 PM No comments: Links to this post

There Can Be Only One... 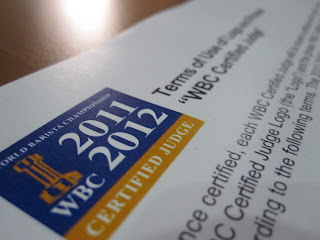 To say that the WBC Judges Certification Class was harrowing would be taking too much literary license, but it wasn't easy. In fact, it was difficult and challenging. Would I pass? I wasn't sure.

You know sometimes you take a test and you know you aced it. This was not one of those times. Since we were the first people in the world to take this test, after the video segment, Stephen asked me what I thought of the section. I figured I must have bombed it because they showed us examples of espresso shots and asked us to snapshot grade them on the WBC scale. None of them I thought earned a "5" (or excellent) grade, but I was sure that they put a five level example in there.

Problem is that I've never given out a "5" in the espresso category during a competition. Never. Not in four years of judging national competitions. In fact, I wasn't sure how a category five espresso should look. I figured I hosed that part of the test.

During the training of the national judges for the Colombian championship, Scott asked me to take the written test that the rest of the judges were taking - just as a control. Of course, the test is in Spanish and my reading comprehension is terrible. I don't know if he really needed a control or just wanted to see if I could do it for giggles but I ended up with a 65% score on the written test in Spanish. Not too bad for someone who can barely comprehend the written language.

But what it did prepare me for was the WBC test in English since some of the questions were similar. Suddenly, a whole new level of understanding opened to me and what I was confused about on the Spanish version was now clear with in English. I figured I did pretty well overall but one section really tripped me up.

As the end of the day and in a nod to the drama that is the television show Master Chef, World Barista Champion Stephen Morrissey and Jose Arreola barricaded themselves in a third floor conference room and called each judge candidate to the room, one by one. Each of us would face the judges and be elevated to WBC Certified Judge or released quietly.

It's dramatic and perhaps needlessly so, but it does create tension and apprehension in the group. Did I pass? Did I fail? Things in the classroom were relatively quiet as the names started being called.

Ask my staff and they'll tell you: I like my bad news straightaway. Bad news first. Bad news quickly. If I didn't pass, how would I spin it? Would I spin it? The test was challenging. It wasn't easy. Truth is, there's no shame in not passing the test. It was difficult.

As I walked into the room, I was met with pallid faces. These were two whom I had partied with, traveled with and ate meals with around the world. Now their faces were dour. Serious. Hmmm, I could be screwed...

Jose asked me how I felt I did about the class. How I think I did. Crap, that's not good. I said something about failing - about how I prefer to know simply "Pass or Fail". They repeated the phrase back to me: "Pass or Fail." That's not telling me much.

My recollection is a bit blurry because I'm already thinking that I'm screwed. I did not pass. They're talking. I'm not sure I'm hearing. But I do hear them say something about how you need to get a twelve out of fifteen to pass the certification. They show me the scoresheet and the number reads "13/15".

Comprehension is slow. There's a cacophony swirling around my head. Did they just say I had to have twelve to pass??? Doesn't that paper read thirteen??? It takes more than a moment to realize and process the data - then to realize that these two have been screwing with me all along.

Deep down inside there's a sense of validation. Being located in Baltimore means that myself and my staff toil in relative obscurity. Our company is the industry darling like Intelligentsia, we're not the media starlets featured in the New York Times like Blue Bottle, we're just a small company of great baristas solidly making drinks for our guests day in and day out.

Most of the time, I try to shield my staff from the coffee industry. I worry that allowing outside influences will filter through our system and dilute our approach. Because of this, I'm reluctant to participate in some industry events, but this also means that I too wonder if we're also performing beyond an industry standard. Part of me is elated that we can know that yes, our standards are at least good enough to be recognized on a worldwide scale. And even though it won't affect our approach to guests, service or product quality, it is nice to know nonetheless.

I ask Jose and Stephen if everyone passed. Sadly, not everyone passed the class. Of the eight who took the class, only those of us who judged the Colombian Nationals actually passed. The rest, while seasoned judges, did not have the advantage of the weeklong immersion the rest of us experienced and it makes me wonder if that should be a necessary component to passing the class. If you're a couple to several months away from competition judging, as many of the others were, it's very difficult to return quickly to calibration for the certification class. And I think that hindered the rest.

Which leaves me in an interesting, if not dubious position. Of the four of us who passed certification, three were certified as Technical Judges: Danilo Lodi (Brazil), Lauro Fioretti (Italy) and Ian Clark (Canada), and one (myself) was certified as a Sensory Judge.

So, until the next Judges Certification Class in Seoul, Korea later this year, that leaves me with the odd distinction of being the only 2011-2012 WBC Certified Sensory Judge on the planet...
Posted by onocoffee at 5:25 PM No comments: Links to this post