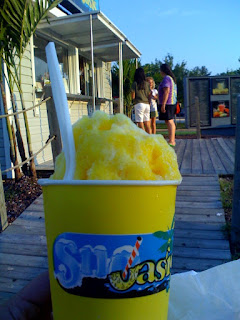 The Banana Banshee Snowball from SnoAsis, our former nemesis.

I guess it's ironic that the owner of arguably the top shave ice place on the East Coast would find himself at a former competitor eating a snowball, but that's just what happened today. Nice, hot weather, paired with nothing in particular to do on my last summer Sunday afternoon in Baltimore and the sudden urge for a snowball led me to our former nemesis, SnoAsis.

These cats have been in the snowball business for 32 years and they're still going strong. When we started Jays Shave Ice, they were the dominant player in our area and they changed some of their practices because of us. From things like air conditioning for staff, to frequent buyer cards to 11pm closing times, their changes were acknowledgments of our encroaching on their territory.

In the end, when the lease for Jays Shave Ice ran out in 2006, I decided to move on and pursue coffee, leaving SnoAsis the dominant player once again.

Truth be told, my favorite flavor of theirs is the Banana Banshee. I don't know how I stumbled upon that flavor ten years ago (or more) but it's one flavor that I've kept to myself, and even though we had all the components to make the Banana Banshee at Jays, I never put an iteration of it on our menu - I think because I was keeping it to myself.

It's really quite simple. Take some evaporated milk, pour it over the ice then top with banana syrup, et voila! you have the Banana Banshee.

Of course, the ice isn't the same smooth silkiness that Jays was known for, but for a once a summer indulgence, it will suffice.
Posted by onocoffee at 7:01 PM No comments: Links to this post