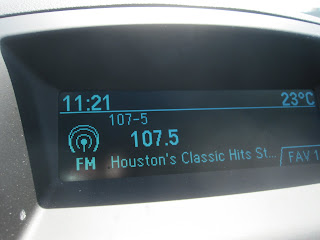 107.5 The Eagle in the Buick Regal rolling across Texas.

Out on the road today,
I saw a Deadhead sticker on a Cadillac,
A voice inside my head said don't look back,
You can never look back.

Despite the fact that I spent many years listening to alternative music such as Depeche Mode, Tackhead, SWANS, Siouxsie and the Banshees, and more, I'm still a product of the late 1970s and 1980s - which means I have an inescapable penchant for rock.

When I envisioned myself doing the grand cruise of America, the soundtrack of my mind never featured Tones On Tail or Strawberry Switchblade, it featured music from The Cars, Van Halen, Journey and Kiss. However, the dearth of classic rock on my iPod produced an interesting conundrum.

How lucky it was to find 107.5 The Eagle as I pointed the Buick Regal west across Texas from Houston. True Classic Rock - two, four, seven. Suddenly, I was accompanied not only by Pat Benatar but the Dire Straits, Foreigner, Loverboy, Fleetwood Mac and Steve Miller.

It was the realization of My American Fantasy.

Now, as I sit in the roastery roasting yet another weeks coffee, I'm able to stream The Eagle over the Internet, listening to classic rock remembering the freedom of the open road across America.
Posted by onocoffee at 3:07 PM No comments: Links to this post