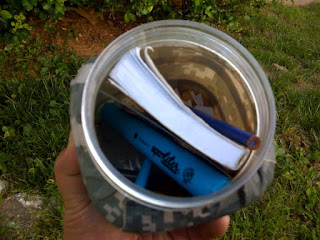 While sitting at the local FroYo joint gingerly consuming an original with macapuno, lychee and mochi balls (my fave combination), I noticed an app on The Hawaiian Stig's iPhone4 called Geocaching. Just what is this app called Geocaching???

He patiently explained to my "soon to be unable to program the VCR" self that geocaching is essentially an electronic treasure hunt where people (geeks) leave some sort of artifact, log it into the Internet and leave it for other people (other geeks) to find. Did I want to give it a try?

It was one of those typical Maryland summer evenings. Hot and humid. Good for air conditioning, bad for playing outside. I thought to myself: "That's gay" (yes, you can eat it, you PC Types) but I thought "why should I be the spoil sport" and decided to give it a try. Besides, there was a geocache less than .23 miles away in the parking lot of the Target nearby.

So, you pull of the app, engage it and it spews out geocaches nearby and you hunt them down. The first one we hunted we couldn't find. Being my first outing and ignorant of the ways of geocaching, I was sure that this geocache was some busted scooter on the side of the road. THS (The Hawaiian Stig) assured me of my muggle folly, but after searching for twenty minutes in the dirt, in the brush and through assorted street jetsam, we gave up on it.

To say that I wasn't intrigued would be a deception. To say that I wasn't having fun geekily searching out hidden treasure would be a lie. It was like going out to play in the neighborhood again. Suddenly, we weren't just sexy, pre-middle aged workaday luddites, we were swashbuckling explorers engaging in a grand adventure in Suburban Timonium. I was Diego to THS's Dora.

After abandoning the first geocache, we charged off to the second. Looking at the GPS map, I knew exactly where the geocache was directing us. Part of the thrill was successfully navigating the streets and terrain to arrive at the precise point to liberate the booty.

With the second geocache, we hit paydirt. Under a shrubbery was a canister covered in digital camouflage tape (oh, those geeks - digital camo tape). Success! THS clambered into the brush to retrieve the prize. Inside was a little notebook, pens, pencils and some stickers. Evidently, people sometimes leave little trinkets in the container for others to find but everyone signs their name into the book. Last entry? May 11, 2011.

The important part of geocaching is not finding the geocache but returning the geocache so that others may one day make your same discovery. I suspect that nefarious types from the Ministry of Geocache absconded with that geocache.

The third (and what was to be the final) geocache brought us to the wilds of Cockeysville. Dirt roads, mossy trees and danger lurked around us. One wrong move and WHAM! We'd be pancaked by a barreling refuse tractor trailer or front end loader. Cuidate, Diego!

Geocachers leave clues on their app page and while the map directed us to a particular point, after reading the clue carefully, I realized that we were in the right general area but at the wrong elevation. The geocache was somewhere 70 feet above us.

After summiting the elevation, we began our search for the prize. Hidden under a bezel was a small box with some paper and a tube of bacon flavored lip balm. I thought about applying it.

There we stood. At the top of world, with all of Cockeysville at our feet. Kings. Romans. Emperors.

Then the phone rang.

It was Hawaiian Stig's wife and she wanted to know when he was coming home.

Our day as Indiana Jones and Marcus Brody was over.

Posted by onocoffee at 8:51 PM No comments: Links to this post