Martha At The Market 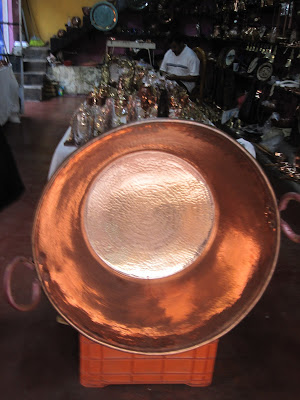 I had never been to La Ciudadela until today while we were on the hunt for a metate, that traditional Mexican volcanic stone grinder that´s ideal for grinding the ingredients for mole. It´s the famous artisanal market filled with things touristy and things useful for the Mexican local. One great thing to remember is that the prices here are muy barato (very cheap).

Like the handmade tin wall mirrors with talavera tiles for 100 pesos (less than 10 dollars). Or the talavera style sugar holder for 150 pesos (less than $15). The prices can be truly astounding. Take for instance the Copper Pot Guy. In his little shop, he´s got all sorts of copper pieces, cookware and the like for crazy prices. A double handled hand-hammered copper pot for 250 pesos?? Insane!

After finding just the right metate, that weighs at least 40 pounds, (and guess who had to carry that thing) we returned to the Copper Pot Guy to make final decisions - because I couldn´t turn down that pot which would cost nearly ten times that at William-Sonoma.

As we´re standing there, two women and a man enter the shop. Normally, I wouldn´t have noticed much about them but they stood out. Two very white and American looking women, very nicely dressed and accompanied by some Mexican guy with dark sunglasses and a cheap suit: bodyguard or driver.

Most American tourists I see in Mexico City dress pretty casually and all kind of blend in to the typical tourist look. Not these two women. The curly redhead seemed a bit uptight, the taller blonde I really didn´t notice other than the fact that she was looking at copper pieces and I thought about recommending one of the pieces just because I liked them. But something about them irritated at me.

They just seemed out of place. They looked out of place. It´s the bodyguard that gave them away. Had it not been for him, I would have probably thought they were just another couple of rich women from Polanco.

That´s right when Morgana said to the blonde: "Martha Stewart."

Hmmm, Martha Stewart. My puzzled look probably turned to perplexed because Martha said to me: "You look like you were trying to figure that out." To which I replied: "Actually, it was your bodyguard that attracted my attention."

You've probably heard the stories about her. A tyrant. A horrible person to work for. A total bitch. A convict. Well, Ana never heard of her and I don´t think most of the merchants and people in the market knew who "Martha Stewart" is and the fact that she runs some mega-company called Martha Stewart Omnimedia - which you probably have to be all those things to achieve that level of success. Of course, I'm sure those rich, cosmopolitan types know Martha.

Despite being outed by Morgana (even though it was only the three of us, the Copper Guy and their bodyguard), Martha was very gracious and pleasant. She looked over some small copper plates, asked The Copper Guy for the price (40 pesos) and then quietly departed. It didn´t seem like anyone, other than Morgana, recognized Martha Stewart in the market.

As she departed, I waited to hear the throngs pushing on this very famous woman in America. Nothing. No one batted an eye. The bodyguard, in this part of Mexico City, was probably overkill. She probably arrived in a Mercedes. Appropriate for Polanco, but probably a bit overkill for this part of town. Here, if she dressed down a bit - maybe jeans and a comfy shirt instead of the tailored trousers and silk blouse, she would blend in and no one would be the wiser.

I thought of Martha after awhile as i was humping this forty pound metate and I felt bit sorry for her. No doubt she will be treated to "the best" of Mexico. She could hang out with Diana Kennedy and probably will have dinner with Presidente Felipe Calderón tonight, but she´ll always be "Martha Stewart" and unable to simply blend in and mingle with regular folk and eat regular food - which, I think, is where the true beauty of Mexico (or any other place in the world, for that matter) lies.

So Martha, if ever you want to break away from the confines of your world, come and hang with us. Wear jeans (Levis are okay with us), wear a t-shirt, wear flip-flops and we´ll arrange a fun meal amongst friends. And you can tell your bodyguard that it´s okay to wear a Mexico futbol jersey (black if he really wants to remain incognito).
Posted by onocoffee at 5:03 PM No comments: Links to this post