The Last Supper at Versaiiles 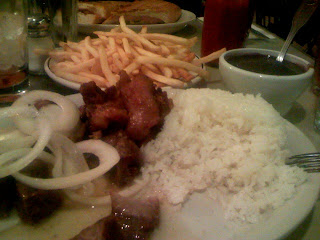 Tonight is the last supper in Los Angeles and we're at Versailles Cuban Food in Manhattan beach with Al, Polly and Laila. In a way, I'm sad to leave family, but I'm also looking forward to this eating binge disguising itself as a working holiday. We haven't done anything except eat since I arrived - which explains so much about Mario Batali.

I'd seen Versailles during my May visit to L.A. and tonight we were in the mood. We got there kinda late (about 9:30pm) and the staff didn't look too happy to see us - especially since it was a slow night and they were probably ready to get the fuck outta there. Happily, another table of four came in a few minutes after us so, if there was any spitting going on in the kitchen, it would be on their food and not ours - I just needed to make sure our food was ordered and fired ahead of theirs. 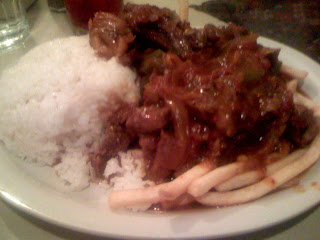 The food at Versailles is standard Cuban fare and while I'd like to think i've had a bit of experience with Cuban food, I have to admit it's pretty limited, and probably pretty stereotypical. Heck, I probably couldn't tell you a traditional Cuban dish beyond the sandwich.

As typical of our eating adventures, the spread was large. Polly went with the Carne Asada, Al ordered the Cuban Sandwich, Laila ordered the Lomo Salteado and I went with the Puercos Fritos. We started off with some Jamon y Queso Croquetes that were inattentively fried and came out on the dark side. The texture and flavor were perfunctory and nothing to rave about.

I was able to sample a little of the Carne Asada and Lomo Salteado, again just decent cooking, nothing that blew me away. Although I was surprised to see the Lomo Salteado on the menu, having only known that as being a Peruvian dish, but that just goes to show you how much I know about Cuban cuisine. 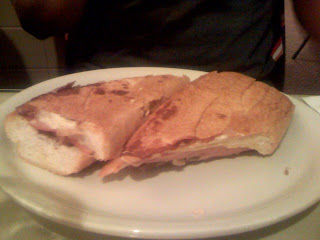 My Puercos Fritos were actually pretty darn good. Slightly on the salty side and the vinegar based sauced only heightened the acidity and saltiness of the dish, but I quite enjoyed it. One problem with the dish, and perhaps its' really my problem is that I noticed what looked like fried fat to me hunked on the back of the plate. I figured these were extra fatty pieces of meat and reserved those for last. When, after consuming all the pork, I reached those pieces, I realized that they weren't fried fat, they were fried plantains! Crap. I tasted them. Yum. Sweet and delicious. Shit, they would have been the perfect counterbalance to the salty fried pork! And I had finished it all! Screwed.

Once again, foiled by my own ignorance. 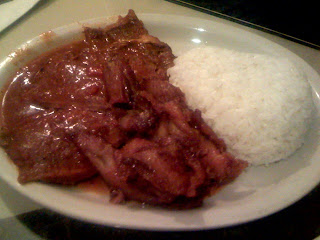 All in all, the food was decent. Again, nothing to march the streets over, just decent cooking at a decent price. And in many ways, you really can't ask for more than that! 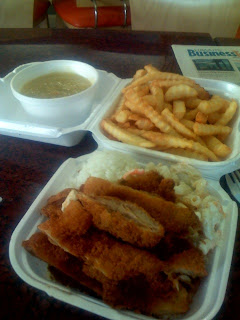 L&L's Chicken Katsu Curry Mini Plate with French Fries and Curry on the side where it belongs.

Back in the mid-to-late 1990s, a place in Honolulu called I Love Country Cafe quietly started serving a dish called Chicken Katsu Curry. Their version featured the ubiquitous chicken katsu (an island variation on a Japanese tradition) smothered in a brown curry sauce over two scoops of brown rice and a green salad. It was the "healthier" version of the typical Hawaiian plate lunch.

Fast forward to today and it seems that every plate lunch joint has incorporated this dish into their menu - to the point where I think a new generation has grown up in Hawaii (and elsewhere) thinking that Chicken Katsu Curry is as "Hawaiian" a plate lunch as is Kalua Pig and Lau Lau.

So, whenever I visit Honolulu (or the West Coast), I try to make a point of it to stop at a favorite plate lunch joint. Beyond all others is the now ubiquitous L&L Drive Inn, also known on the mainland as L&L Hawaiian Barbecue. Now, how "barbecue" and "plate lunch" has become synonymous with each other is only known to the mind of Eddie Flores (the owner of L&L). What was once a couple plate lunch joints on Oahu is now a multi-state franchise that reaches all the way from Hawaii to 64 Fulton Street in New York City.

I've been in L.A. now for over a week. I used to come here a lot for work, both when I worked in the movie and paintball businesses. It's nearly a second home for me. I was even invited to join The Grand Havana Room in 1995 when it first opened. Because of this, being in L.A. is really like being at home - kinda boring. What's there to do? What's there to do at home? Exactly! Nada. The only thing there really is to do of interest is eat, so off to L&L I go.

The Hawthorne branch of L&L is an average sized plate lunch place with all the usual menu items. The biggest problem with L&L is their exclusivity with Pepsi. I abhor Pepsi and refuse to drink it. But I'm here for the curry.

When visiting any L&L beware of the serving sizes. Their plate lunch is huge. I can't finish it. And if I do, I'm hating myself for it. It's a monster. Better to go with the "mini plate" that consists of less meat, one scoop of rice and one scoop of macaroni salad. It's much more manageable and still quite filling.

Everything is prepared as expected. There's no surprises here. It's fried food galore and nicely done. Good thing I got the curry sauce on the side because one bite reminds me that I hate L&L's curry sauce. It's this yellow muck that's just lame on flavor. Their tonkatsu sauce would have been the better choice. Did I say their curry sauce sucks? I did? Well, let me say it again: I hate their curry sauce. It's just nasty. Mostly coconut milk with some coloring and very little flavor to make it pop. After a few bites, I abandoned the sauce altogether and stuck with the Tabasco.

I'm a texture freak. Which means that I love all sorts of textures while eating. The crunchy batter of the katsu, the pillowy softness of the rice, the spice of the Tabasco, the chewiness of the macaroni and the crispiness of french fries. The truth is, like rice, I can eat french fries with anything. It's my addiction. It's my version of crack cocaine. The L&L version is typical Sysco-style frozen crap but it does the job.

One thing I've learned over the years is that while L&L may be everywhere, it's really just perfunctory in quality. Whether you're in Hawaii or on the West Coast, there's typically some other plate lunch joint that's doing it better. When I'm back in Honolulu, I prefer You Hungry? In Vegas, I prefer Ohana's Hawaiian Barbecue, and in L.A., I'm starting to prefer Bruddah's. Conversely, when I'm in a pinch (or in Washington state or New York City) and I need my plate lunch fix, L&L fits the bill. 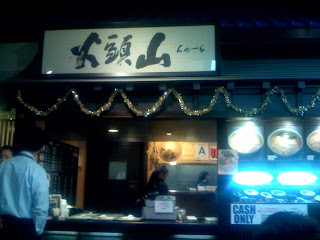 Ramen. Such a fighting word. Beyond the freeze-dried stuff you buy at the grocery store for fifty-nine cents that passes itself off as "ramen," there exists a world flavor, texture and delight that no amount of hot water poured into a styro cup can ever satisfy. This is the world of real ramen. That Chinese-derivative Japanese noodle soup that inspires legions, forms the basis of movies and causes brothers to battle. The line between miso and shoyu is deep and one does not cross sides lightly.

The beauty of Southern California is its' pockets of life in the form of ethnic communities. While Mexican food abounds through most of Los Angeles, a visit to Gardena or Torrance reveals a strong, East Asian (namely Japanese) world. And nestled in this community is the Mitsua Marketplace - a warehouse sized building filled with a food court, shops and grocery store chock-full of Japanese foods and items. Need a book on Nobu Style? They've got it. Shiseido cosmetics? They've got it. Some weird kitchen contraption? No problem. Salty toothpaste? Yes! Pocky sticks? Of course. Tonkatsu? Hai!

Within the food court is reputedly one of Los Angeles' best ramen stands. It's a relatively simple operation that features a model menu you can point to, or a written menu in Japanese that you can also point to. Al and Polly had been here many times before and knew of my prediliction towards ramen and decided that I had to check it out before leaving. 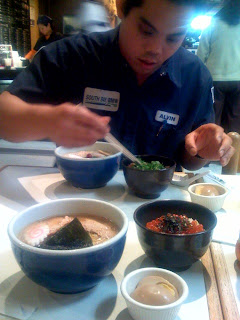 I went with some pretty standard fare, shoyu ramen (that's a soy sauce based soup) with sliced pork, sliced fish roll and seaweed, with a hard boiled egg and a boil of rice and salmon roe. Al ordered almost the same thing, except his ramen had a different soup base and his rice bowl had pork instead of fish eggs.

It was good stuff. The noodles, which is the heart of the soup and the broth its' soul, were really reminiscent of Chinese saimin noodles: thin, squiggly but chewy. The broth was delicious, delicate and refined with just a lingering flavor of soy sauce. The salmon roe was fresh and popped in the mouth with a delicate saltiness. I'm a big fan of hard boiled egg with my ramen, so I was excited that mine came with one. This one was properly cooked but the outer skin was brown as though it had been steeped in tea for quite some time. Whatever flavoring what used turned out to be too delicate and disappeared under the flavor of the ramen.

In all, a good meal and a great place to shop. If only I lived there, I could have gone to town in the grocery store. Although I did pick up several Japanese cookbooks - including one titled: Nobu Style.